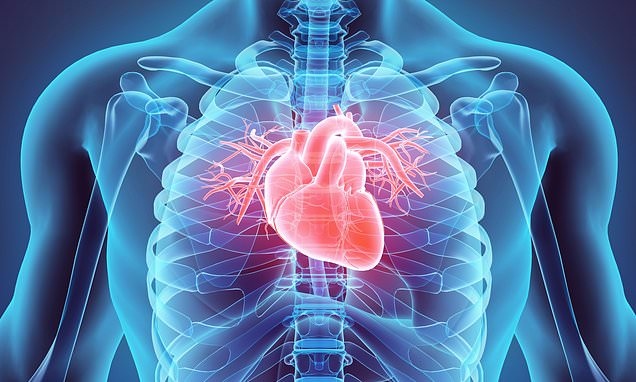 ‘Revolutionary’ drugs which could reduce the damage caused by heart attacks are being developed by scientists.

The medications could block harmful chemical signals produced when the organ’s blood supply is interrupted.

A lack of oxygen then releases chemicals which cause sections of tissue to die and can leave people with heart failure, raising the risk of further heart attacks or strokes.

Tests of an experimental drug reduced heart damage after an attack by as much as 60 per cent, raising hopes it could improve survival rates in humans.

Heart attacks cause more than 200,000 hospital visits in the UK each year – one every three minutes. 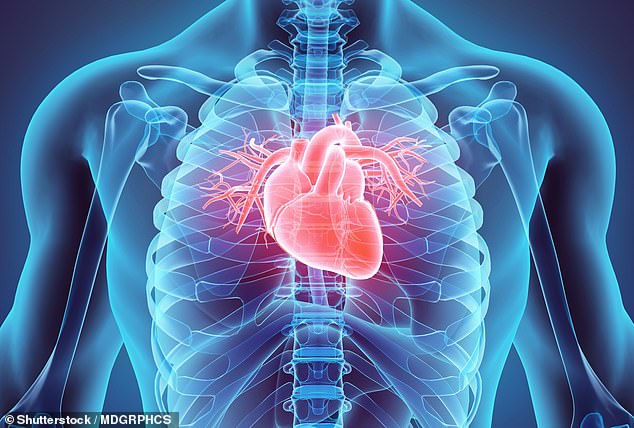 More than 200,000 hospital visits in the UK are caused by heart attacks each year, and many patients are left with permanent heart damage which makes the muscle less able to pump blood around the body (stock image)

They hope to get the medications through safety testing and onto patient trials by 2021 in a bid to revolutionise care after heart attacks.

‘Finding a drug that could limit the death of heart muscle during and after a heart attack, and stop the decline towards heart failure, has been a target of research for decades,’ said Professor Metin Avkiran, associate medical director at the BHF.

‘But, despite a number of promising candidates in the past, we still have no drugs that can do this in routine clinical use.’

Professor Michael Schneider, from Imperial College, added if the drug works as they hope it will it will be a ‘revolution in the treatment of heart attacks’.

The new medication works by targeting a protein called MAP4K4, which scientists identified as important when studying the bodies of people with heart failure.

WHAT IS HEART FAILURE?

Heart failure means the heart is unable to pump blood around the body properly, usually because the muscle has become too weak or stiff.

Heart failure doesn’t mean heart has completely stopped working. It can occur at any age, but is most common in older people.

Heart failure is a long-term condition which tends to get gradually worse over time. It can’t usually be cured, but the symptoms can often be controlled for many years.

The main symptoms of heart failure are:

Some people also experience other symptoms, such as a persistent cough, a fast heart rate, and dizziness.

Symptoms can develop quickly or gradually over weeks or months.

See your GP if you experience persistent or gradually worsening symptoms of heart failure.

MAP4K4 is activated in mouse and human tissue after a heart attack and causes irreparable damage to the heart and other bodily tissues, the scientists found.

By blocking its activity in human tissue in a lab-produced ‘heart attack in a dish’ the team could reduce this damage by almost two thirds.

When someone has a heart attack the blood supply to the organ is cut off or reduced, starving it of oxygen.

This lack of oxygen, which is necessary for all muscles and organs to function, triggers chemical stress signals which can cause cells to die.

When cells die in parts of the heart the muscle becomes weaker and less able to pump blood which, if the patient survives the attack, has life-long health impacts.

The heart cannot circulate blood as well if it has been damaged during a heart attack – a condition called heart failure, which makes strokes more likely.

An estimated 900,000 people in the UK and 5.7million Americans are living with heart failure, a condition in which the heart is less efficient than it should be.

Professor Schneider said: ‘There are no existing therapies that directly address the problem of muscle cell death and this would be a revolution in the treatment of heart attacks.

‘One reason why many heart drugs have failed in clinical trials may be that they have not been tested in human cells before the clinic.

‘Using both human cells and animals allows us to be more confident about the molecules we take forward.’

The research is published in the journal Cell Stem Cell.

Related posts:
07/03/2019 Health News Comments Off on ‘Revolutionary’ heart attack drug could reduce damage by up to 60%
Categories
Recent Posts