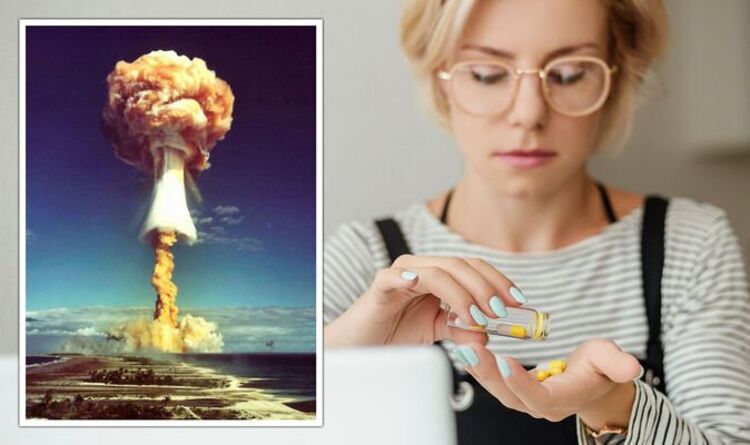 Ukraine: Ex-RAF chief says use of nuclear weapons is possible

Putin’s military orders in late February included Russia’s record-breaking nuclear arsenal. While it has almost 50 times fewer warheads than during the Cold War, the country still has the world’s most at 6,257. Any that ultimately detonate in or above the UK would kill millions of people immediately, leaving the rest fighting radiation.

Could iodine tablets save people from nuclear radiation?

In the event of a nuclear detonation or power plant leak, the immediate vicinity risks contamination.

By its nature, radioactive material can contaminate air, water, surfaces such as soil or buildings, animals and more.

Contamination also involves several radioactive byproducts, one of which is radioiodine.

Radioiodine is often ejected into the air following a radiation-related incident and settles in the lungs when breathed.

The thyroid gland then processes the radionuclide, which, in turn, causes injury.

Potassium iodide (KI) has long been hailed as a solution to this problem, as it acts to block its radioactive relative.

Those who take KI tablets stop their thyroid from processing the dangerous material before it causes damage.

Typically, the required dosage is approximately 130mg, and it allows the body to filter out excess iodine via the urine.

Reducing the radioiodine, in the long run would help prevent thyroid cancer or other conditions.

But, unfortunately, that is where its benefits end, as other organs are left exposed.

Specifically, as highlighted by the Health Physics Society (HPS), it won’t mitigate the effects of a “dirty bomb” or “dispersion of spent nuclear fuel”.

The HPS disputed the tablets’ use over the years and regular championing by some media outlets.

The society wrote: “KI has been erroneously represented as a ‘magic bullet of radiation protection.

“KI, if taken properly, only protects against internal radiation from radioiodine taken into the body.

How can you protect yourself from nuclear radiation?

With KI out of the picture for protecting anything but thyroid function, people may want to know where else they should turn.

Radioactive material produces deadly effects following exposure, killing anyone not immediately vaporised during an event in hours or days.

Stanford University has set out a five-point plan for avoiding the ill effects of alpha, beta gamma and X-ray radiation.

The Stanford University steps include:

Keeping exposure time to a minimum

– For alpha: Paper or a human hand

– For beta: A thin sheet of aluminium

– For gamma: Lead or several metres of concrete

Related posts:
20/03/2022 Health News Comments Off on Nuclear war: Why iodine tablets could save you AND leave you vulnerable to radiation
Categories
Recent Posts