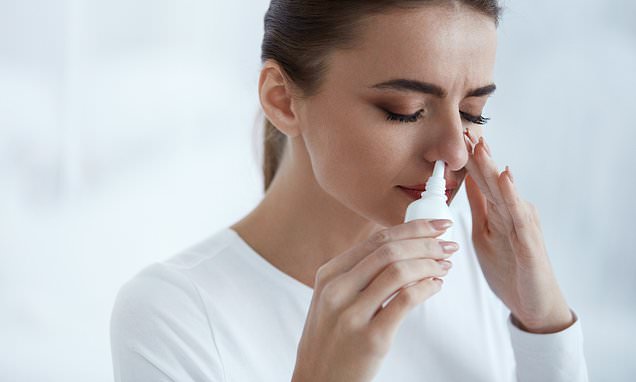 Nose spray could treat depression in as little as TWO hours

A nasal spray could be a new way to tackle depression. Based on a horse tranquilliser, the spray gets to work in as little as two hours, far quicker than widely used medications that can take weeks to kick in.

The liquid contains a compound called esketamine, which is thought to act on the brain chemical glutamate to restore connections between brain cells. It’s used in far smaller doses than the street drug ketamine.

The U.S. regulator, the Food and Drug Administration, last week approved the use of the spray for patients with depression that does not respond to other treatments. 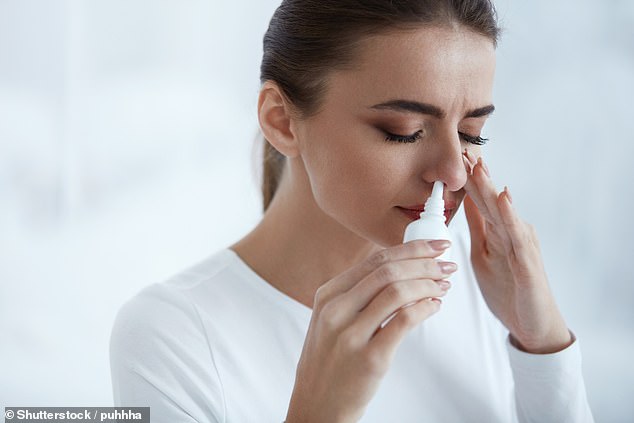 The liquid contains a compound called esketamine, which is thought to act on the brain chemical glutamate to restore connections between brain cells (stock image)

Five UK centres are taking part in a long-term trial of the spray, which is used twice a week. Depression is a mood disorder that causes persistent feelings of sadness and loss of interest. Clinical depression is estimated to affect one in 15 adults at some time.

It is the result of changes in brain chemistry, and causes range from genetics and changes in hormone levels, to chronic medical conditions, stress and grief.

The most common treatments are drugs called selective serotonin reuptake inhibitors (SSRI). These work for some — not all — patients, and can take between two and six weeks to exert full effects. A study of 3,000 cases of severe depression in the American Journal of Psychiatry found that less than 30 per cent had remission after taking SSRIs.

A nasal spray has been investigated, as it offers quicker relief because the drug gets to where it is needed in the brain without being processed through the body. 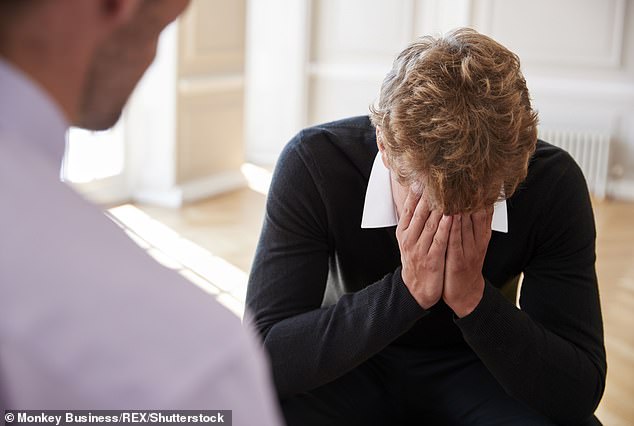 While most existing drugs act on the brain chemical serotonin, which is involved in mood regulation, esketamine acts on another chemical, glutamate.

The surprising reasons for a flushed face. This week: Hormones

Hot flushes are one of the most common symptoms of the menopause. A rise in facial temperature causes blood vessels just under the skin to dilate, resulting in reddening.

One theory is that hot flushes are down to a malfunctioning of heat control mechanisms in the brain, possibly triggered by changes in oestrogen and other hormones around the time of menopause. Flushes are occasionally seen in men, with a drop in testosterone implicated — most likely as a result of androgen deprivation therapy, a prostate cancer treatment which restricts the production of testosterone, so it can’t stimulate cancer cell growth.

The NHS says hormone replacement therapy (HRT) is an effective treatment. But other therapies can help, including vitamin E, which has anti-inflammatory effects, and even antidepressants, which regulate hormones, such as serotonin, that influence body temperature.

Research has shown that problems with connections between nerve cells in the brain may lead to depression. One theory is that it is associated with a wasting away of nerve cells in brain regions that control mood and emotion, possibly as a result of stress.

Glutamate, released by nerve cells in the brain, is one chemical responsible for sending signals between nerve cells. However, too much glutamate is bad for the brain, leading to nerve cell loss, and has been linked to depression.

Esketamine works by blocking excess glutamate and this is thought ultimately to repair and restore nerve cells. Animal studies dating back to the Fifties have suggested drugs that act on glutamate may be effective for depression. But it was not until 2000 that the first small study in humans found similar effects.

One new study, reported in the Journal of Psychiatric Research, analysed data on 14 patients given esketamine.

Results showed four of the seven people using the spray responded to treatment after two hours and three went into remission.

None of the seven taking a placebo saw an improvement.

Around 1,150 patients are taking part in a study of the drug at hospitals across the U.S., Canada, South America and Europe. They will use the esketamine nasal spray twice a week; they’ll be monitored for around five years.

Building muscle strength may lower your risk of type 2 diabetes by up to 32 per cent, according to a study of 4,500 adults in the journal Mayo Clinic Proceedings. Researchers recommend a resistance workout with squats, planks or lunges, then adding weights.

Carmine Pariante, a professor of biological psychiatry at King’s College London, said: ‘It is important to stress that only selected patients will use this drug — those with severe depression and who do not respond to currently available antidepressants.

‘Longer studies are needed to fully understand the risks of using this medication. Nevertheless, it is truly exciting that, after many years, we finally have an antidepressant that acts on a completely novel mechanism in the brain.’

Could this be the answer to peanut allergies?

Researchers have found a way to suppress the allergic reaction to peanuts. Peanut allergens bind with an antibody called immunoglobulin E (IgE) in susceptible people, setting off a chain reaction that can lead to anaphylactic shock.

Now researchers at the University of Notre Dame in the U.S. have prevented allergens binding to IgE using a substance called covalent heterobivalent inhibitor.

Writing in the Proceedings of the National Academy of Sciences, the researchers said their findings open the door to a new class of allergy treatments.

Gum disease may increase the risk of impotence. A review by Jinan University in China involving more than 200,000 men found those with gum disease were 2.85 times more likely to be impotent. One theory is gum disease increases inflammation, which damages blood vessels that supply the penis.

Now research reported in the Faseb Journal shows that iso-a-acids, or IAAs, found in hops (which give beer its bitterness) increase levels of the brain chemical dopamine in mice, activating the vagus nerve, important in memory.

The researchers at Kobe University School of Medicine, Japan, noted an improvement in spatial and object recognition memory when the mice were administered IAAs.

They said this suggested foodstuffs containing IAAs may be a safe way to improve cognitive function.

We reveal the ingredients in everyday products. This week: Calpol 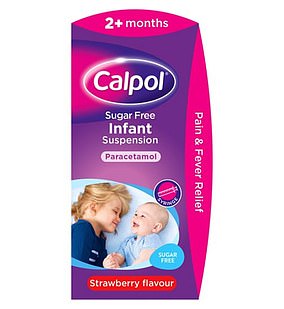 We reveal the ingredients in everyday products. This week: Calpol

SORBITOL LIQUID: Another alcohol sugar used in combination with maltitol liquid to form the basis of the medicine.

DISPERSIBLE CELLULOSE: The structural component of Calpol, which ‘carries’ the active ingredient (paracetamol).

XANTHAN GUM: A food stabiliser and thickener that stops the medicine splitting into separate ingredients.

PARACETAMOL: The active ingredient in Calpol, paracetamol is a mild painkiller. The exact working mechanism is not known, but it is accepted that it dampens the intensity of pain signals received by the brain and stops the release of substances which increase pain and body temperature.