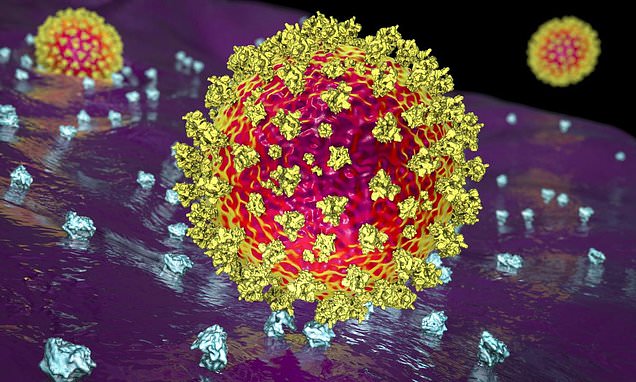 Next major COVID variant IS poised to be more deadly, doctors warn after studying patient who harbored Omicron for six months

The next Covid variant to emerge is poised to be more severe than the mild strains that are currently world-dominant, according to a new study.

The ultra-infectious Omicron strain emerged almost exactly a year ago and its mutated spinoffs have risen to the top in virtually every country in the world.

They are far milder than the older versions of the virus and many researchers believed they represented a kind of end game for Covid’s evolution, which like many viruses before it, mutate to be more mild so they can spread more easily.

But researchers in South Africa say the virus still has the potential to get deadlier after examining an immunocompromised HIV patient who harbored the virus for half a year.

Over time, the virus evolved to cause more cell death and cell fusion, leading to inflammation in the lungs.

These effects more closely resembled those of the ancestral Covid strain than the Omicron strain, according to Alex Sigal, leader of the study.

The patient is one of the longest known sufferers of Omicron, which itself is widely believed to have evolved in someone with a severely weakened immune system.

Immunocompromised people cannot adequately clear out infection, which allows the virus to continually replicate and mutate in their body over time, before spreading to others with its new alterations.

Still, the findings from South Africa represent just one theory about the future of Covid’s spread and protection gained through vaccination and prior infection puts the US – and world – in a stronger position to beat back another deadly surge.

The finding comes amid warnings that China’s unrelenting Covid outbreak could spawn a doomsday variant which has the potential to send the world back to square one in its fight against the virus. 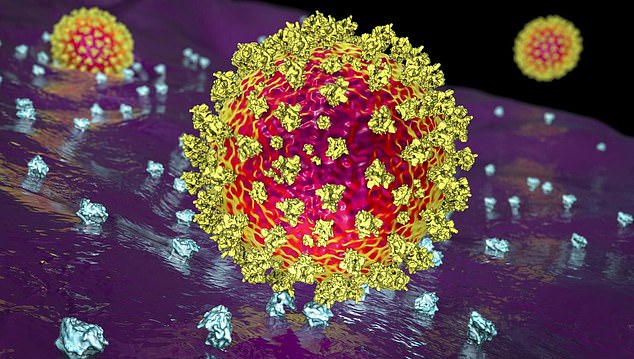 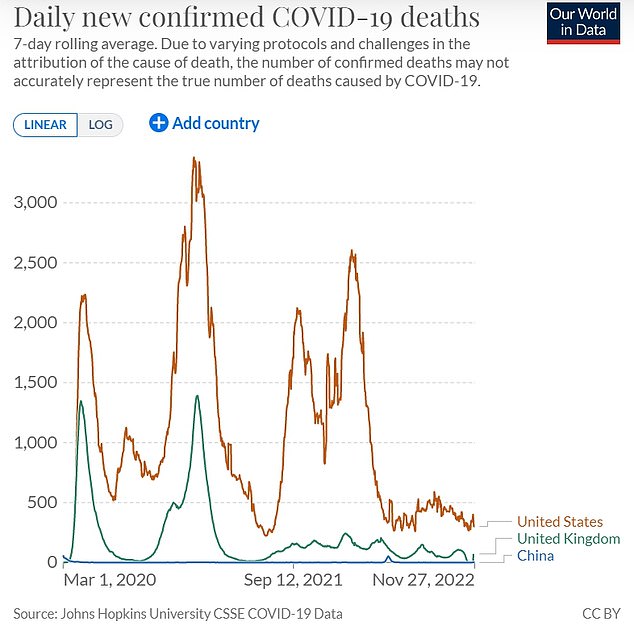 Covid deaths in the US remain high at around 400 per day on average, considerably higher than the UK, which is reporting an average of about 72 deaths per day. China, meanwhile, has not made true mortality data publicly available.

The latest study, by researchers from the Africa Health Research Institute in the South African city of Durban, looked at regular blood samples from the long-term Covid patient.

Dr Sigal said: ‘It’s not simple because early virus was attenuated. However, by parameters we measured, it became less attenuated, showing that long-term evolution does not always lead to attenuation.

Covid status report: Where does the US stand?

Covid-19 remains a public health issue of major concern despite evidence that the pandemic is waning.

More than 36,000 cases on average are detected daily in the US.

This is certainly an undercount given the prevalence of rapid at-home tests and reduced reporting to public health officials.

The daily case average is high but it’s a far cry from last winter when omicron was causing nearly 900,000 cases daily.

Daily deaths linked to Covid in the US hover between 300 and 400.

More than 23,000 Americans are currently in the hospital being treated for Covid.

‘Therefore, the next major variant, if it comes, may not necessarily be as mild as Omicron.’

When the lungs become inflamed, immune cells rush to that site. This causes fluid to build up in the lungs, which can lead to can cause lung complications such as pneumonia and, in the most severe cases, acute respiratory distress syndrome, or ARDS.

To document cell fusion and death, the scientists sequenced viral samples from the patients blood shortly after they were diagnosed with Covid, then within the first month of diagnosis, and then at three-month intervals.

They found that isolates of the original Wuhan strain causes a relatively high degree of cell death with about 11 to 13 per cent of infected cells being detected as dead.

Cell death in omicron BA.1 and BA.5 were lower, about four percent and slightly less than six per cent respectively.

They infused the isolates with an organic dye and recorded cell fusion and death, resulting in a kind of movie showing the changes over time.

The finding came as a shock to the researchers, who hypothesized that strains of Covid-19 will become less virulent and infectious over time judging by the relative mildness of omicron compared to previous variants.

The omicron variant has proven to cause less severe disease than the original Covid strain as well as the alpha and delta variants.

The team’s findings do not bode well for the global response to the ongoing public health issue.

The US has been bracing for a surge in Covid during the winter months which, for the most part, has been overshadowed by the explosion of RSV and flu cases.

Patients in many states where hospitals are swamped are being transferred hundreds of miles in helicopters in search of an available bed.

Even major hospitals such as Mass General for Children in Boston and Baltimore’s Johns Hopkins are stretched thin.

But the latest pre-print publication – which has not been peer-reviewed by other scientists – came with several caveats.

The hypothesis was only testing a single patient. A much larger sample size is needed to make a conclusion about the virus’ course of evolution.

Dr Anthony Fauci, the government’s top infectious disease expert and President Joe Biden’s chief medical advisor said on Sunday that the US is ‘certainly’ still in the middle of a Covid pandemic.

More than 23,000 people on average are in the hospital for Covid every day while average daily deaths are hovering between 300 and 400.

Related posts:
28/11/2022 Health News Comments Off on Next big Covid variant WILL be more deadly, according to new study
Categories
Recent Posts