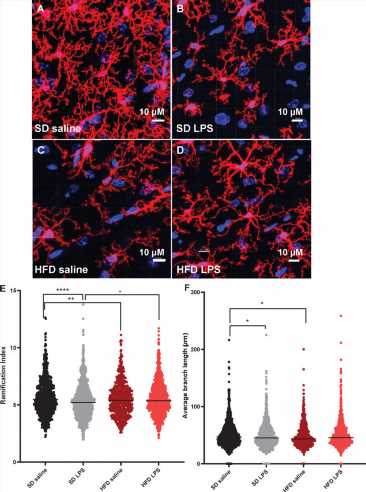 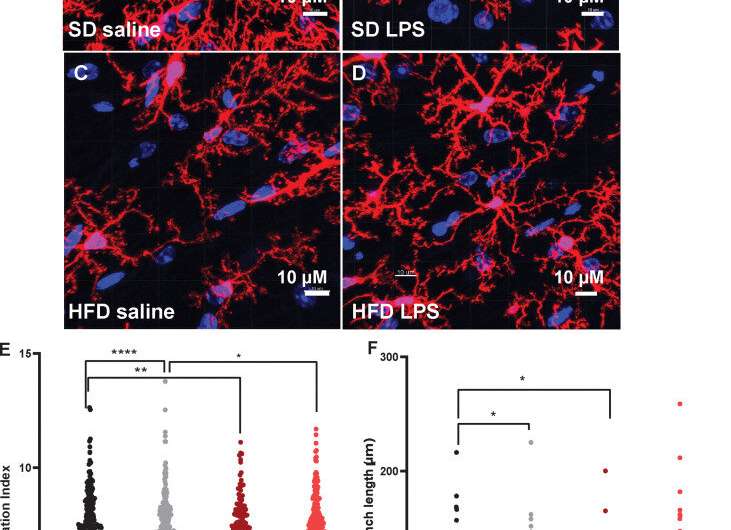 Researchers at Michigan Medicine have discovered that a high-fat diet promotes an early inflammatory response in the brains of mice through an immune pathway linked to diabetes and neurologic diseases, suggesting a possible bridge between metabolic dysfunction and cognitive impairment.

For the study, published in Frontiers in Immunology, investigators analyzed activation of the cGAS/STING immune pathway in a high-fat diet mouse model of prediabetes and cognitive impairment or dementia. Though early changes in cognition were not detected, results reveal insulin resistance, as well as inflammatory activation of cGAS/STING and the microglia, the brain’s immune cells, within three days of feeding.

“While there is evidence suggesting a role for cGAS/STING in obesity and diabetes, both of which make patients more vulnerable to cognitive impairment or dementia, its role in the brain has not been previously studied,” said Sarah Elzinga, Ph.D., first author and a postdoctoral fellow at the NeuroNetwork for Emerging Therapies at Michigan Medicine.

“We now see that this pathway is involved in an early burst of immune response in the microglia, which plays a critical role in Alzheimer’s disease and related dementias. If microglia are activated in the hippocampus under high-fat diet conditions, that may contribute to inflammation and degeneration in the nervous system and eventual cognitive impairment or dementia.”

Obesity and diabetes are significantly associated with the development of dementia and other neurologic diseases. Elzinga and the research team say further research is needed to examine if inhibiting the cGAS/STING pathway is a possible treatment target for reversing or preventing harmful changes in the brains of people who develop cognitive impairment or dementias.

“Innovative ideas that can lead to novel treatment paradigms are critical in our battle against Alzheimer’s disease,” said senior author Eva Feldman, M.D., Ph.D., James W. Albers Distinguished Professor at U-M, the Russell N. DeJong Professor of Neurology and director of the NeuroNetwork for Emerging Therapies at Michigan Medicine. “This research with cGAS/STING is one such innovation and opens doors to exciting new therapeutic possibilities.”