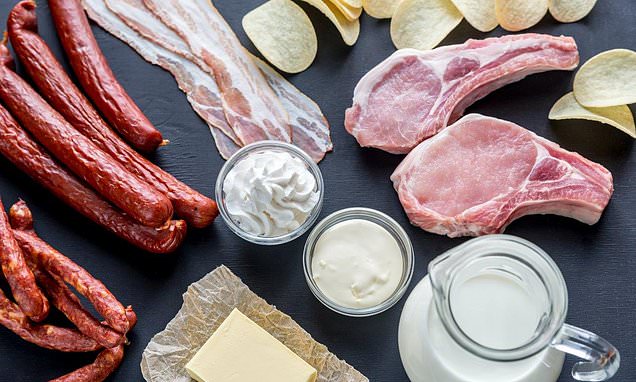 High cholesterol could triple the risk of an elderly person developing dementia, a study has warned.

Scientists said a history of the medical condition was an ‘major risk’ in someone’s chance of developing the devastating brain disorder.

And it was even more of a risk than smoking, not exercising or being overweight or obese, the researchers claimed.

Excessive cholesterol could contribute to the development of the plaques in the brain which cause Alzheimer’s – the most common form of dementia.

The finding adds to past research warning about the dangers of high cholesterol, which comes from foods with a lot of saturated fat such as dairy and red meat.

And the scientists said over-60s should eat fewer of these foods to try and reduce their risk, as well as exercise more often. 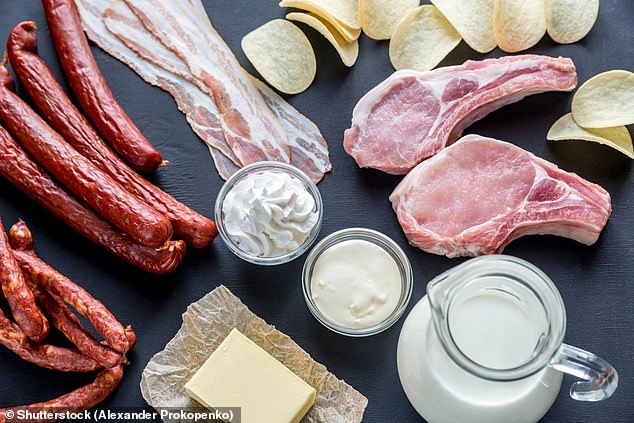 The Indonesian researchers said people over the age of 60 should exercise more and cut down on foods high in saturated fat, such as milk, cheese, butter and processed or red meats (stock image)

Researchers at Universitas Indonesia studied the health of 106 over-60s in Jakarta to determine what was most likely to affect their risk of dementia.

‘Based on this research, a history of high cholesterol is the most influential factor for dementia incidence in the elderly population,’ the authors, led by Dr Junaiti Sahar, said.

WHAT IS HIGH CHOLESTEROL?

Cholesterol is a fatty substance that is vital for the normal functioning of the body.

But too much can cause it to build up in the arteries, restricting blood flow to the heart, brain and rest of the body.

This raises the risk of angina, heart attacks, stroke and blood clots.

Cholesterol is made in the liver and is carried in the blood by proteins.

The first – high-density lipoprotein (HDL) – carries cholesterol from cells to the liver where it is broken down or passed as waste. This is ‘good cholesterol’.

High cholesterol can be genetic but it is also linked to a diet rich in saturated fat, as well as smoking, diabetes, high blood pressure and a family history of stroke or heart disease.

Blood cholesterol is measured in units called millimoles per litre of blood, often shortened to mmol/L.

Cholesterol can be lowered by eating a healthy, low-fat diet; not smoking; and exercising regularly.

If these do not help, cholesterol-lowering medication like statins may be prescribed.

Cholesterol is a fatty substance found in the blood which is normal but can become dangerously high in people who eat unhealthily and don’t exercise.

High levels of it can cause problems with blood circulation because it builds up on the inner walls of arteries, meaning blood flows less efficiently and blood pressure rises.

Past research has linked high levels of cholesterol to dementia through the formation of clumps of protein in the blood.

Cholesterol has been found to trigger the development of these toxic ‘plaques’ and, if they form in – or travel to – the brain they can build up there and lead to Alzheimer’s.

Alzheimer’s causes more than six in 10 cases of dementia, which affects at least 850,000 people in the UK and 5.8million Americans.

In their study the Indonesian researchers found 75 per cent of their participants had high cholesterol levels.

Among those who had a history of high cholesterol – a group in which there were 24 people – people appeared to have a 50/50 chance of getting dementia.

Whereas those who didn’t have a history of high cholesterol had a 39 per cent chance of having dementia.

These results, they said, were not statistically significant, but they still concluded that a history of high cholesterol was a ‘major risk factor for dementia’.

Their adjusted figure showed that, when someone’s smoking habits, weight, exercise, blood pressure and education were taken into account, a history of high cholesterol increased the dementia risk by a factor of 3.2.

Meanwhile, dementia risk was increased by 2.2 times by smoking, 2.3 times by a lack of exercise and three times by being poorly educated.

They didn’t specify which foods should be cut down on but those known to raise cholesterol include processed or fatty meats, cheese, butter and baked goods.

The research was published in the journal Enfermería Clínica.

Government advice limits the average British adult to between 200 and 250 calories from saturated fat each day – equal to about 31g of butter.

Too much saturated fat is feared to increase the risk of heart problems because it’s known to raise cholesterol and potentially build up in the blood vessels.

Meals should be based on potatoes, bread, rice, pasta or other starchy carbohydrates, ideally wholegrain, according to the NHS

• 30 grams of fibre a day: This is the same as eating all of the following: 5 portions of fruit and vegetables, 2 whole-wheat cereal biscuits, 2 thick slices of wholemeal bread and large baked potato with the skin on