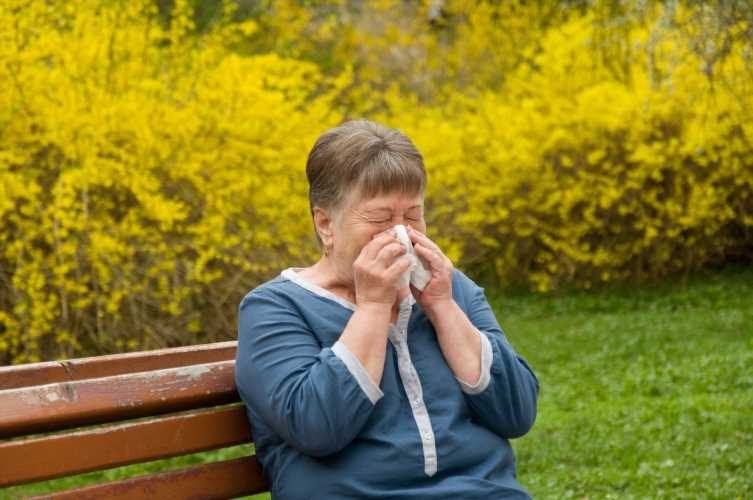 Itchy eyes, a congested nose, sneezing, wheezing and hives: these are symptoms of an allergic reaction caused when plants release pollen into the air, usually in the spring or fall. Many people use hay fever as a colloquial term for these seasonal allergies and the inflammation of the nose and airways.

"It is not an allergy to hay," Josephson, author of the book "Sinus Relief Now" (Perigee Trade, 2006), told Live Science. "Rather, it is an allergy to weeds that pollinate."

In 2019, spring arrived early in some parts of the country and later in others, according to the National Phenology Network (NPN). Spring brings blooming plants and, for some, lots of sneezing, itchy, watery eyes and runny noses. According to NPN data, spring reared its head about two weeks early in areas of California, Nevada and many of the Southern and Southeastern states. Much of California, for example, is preparing for a brutal allergy season due to the large amount of winter rain. On the other hand, spring ranged from about one to two weeks late in the Northwest, the Midwest and the Mid-Atlantic U.S. [Watch a Massive 'Pollen Cloud' Explode from Late-Blooming Tree]

The symptoms of allergic rhinitis may at first feel like those of a cold. But unlike a cold that may incubate before causing discomfort, symptoms of allergies usually appear almost as soon as a person encounters an allergen, such as pollen or mold.

Many of these symptoms are the immune system's overreaction as it attempts to protect the vital and sensitive respiratory system from outside invaders. The antibodies produced by the body keep the foreign invaders out, but also cause the symptoms characteristic of allergic responses.

People can develop hay fever at any age, but most people are diagnosed with the disorder in childhood or early adulthood, according to the Mayo Clinic. Symptoms typically become less severe as people age.

Often, children may first experience food allergies and eczema, or itchy skin, before developing hay fever, Josephson said. "This then worsens over the years, and patients then develop allergies to indoor allergens like dust and animals, or seasonal rhinitis, like ragweed, grass pollen, molds and tree pollen."

Hay fever can also lead to other medical conditions. People who are allergic to weeds are more likely to get other allergies and develop asthma as they age, Josephson said. But those who receive immunotherapy, such as allergy shots that help people's bodies get used to allergens, are less likely to develop asthma, he said.

The most common allergen is pollen, a powder released by trees, grasses and weeds that fertilize the seeds of neighboring plants. As plants rely on the wind to do the work for them, the pollination season sees billions of microscopic particles fill the air, and some of them end up in people's noses and mouths.

Spring bloomers include ash, birch, cedar, elm and maple trees, plus many species of grass. Weeds pollinate in the late summer and fall, with ragweed being the most volatile.

The pollen that sits on brightly colored flowers is rarely responsible for hay fever because it is heavier and falls to the ground rather than becoming airborne. Bees and other insects carry flower pollen from one flower to the next without ever bothering human noses.

Mold allergies are different. Mold is a spore that grows on rotting logs, dead leaves and grasses. While dry-weather mold species exist, many types of mold thrive in moist, rainy conditions, and release their spores overnight. During both the spring and fall allergy seasons, pollen is released mainly in the morning hours and travels best on dry, warm and breezy days.

How do scientists know how much pollen is in the air? They set a trap. The trap — usually a glass plate or rod coated with adhesive — is analyzed every few hours, and the number of particles collected is then averaged to reflect the particles that would pass through the area in any 24-hour period. That measurement is converted to pollen per cubic meter. Mold counts work much the same way.

A pollen count is an imprecise measurement, scientists admit, and an arduous one — at the analysis stage, pollen grains are counted one by one under a microscope. It is also highly time-consuming to discern between types of pollen, so they are usually bundled into one variable. Given the imprecise nature of the measurement, total daily pollen counts are often reported simply as low, moderate or high.

A physician will consider patient history and perform a thorough physical examination if a person reports having hay-fever-like symptoms. If necessary, the physician will do an allergy test. According to the Mayo Clinic, people can get a skin-prick test, in which doctors prick the skin on a person's arm or upper back with different substances to see if any cause an allergic reaction, such as a raised bump called a hive. [7 Strange Signs You're Having an Allergic Reaction]

Blood tests for allergies are also available. This test rates the immune system's response to a particular allergen by measuring the amount of allergy-causing antibodies in the bloodstream, according to the Mayo Clinic.

Patil suggested figuring out exactly what type of pollen you're allergic to, and then avoiding planning outdoor activities during peak pollinating times in the months when those plants are in bloom. Many grasses, for example, typically pollinate in late spring and early summer and release most of their spores in the afternoon and early evening.

Her other strategies: Be able to identify the pollen perpetrator by sight; monitor pollen counts before scheduling outdoor time; go outside at a time of day when the plants that make you go achoo are not pollinating; and wear protective gear like sunglasses, among other tips. [7 Strategies for Outdoor Lovers with Seasonal Allergies]

Allergy sufferers may also choose to combat symptoms with medication designed to shut down or trick the immune sensitivity in the body. Whether over-the-counter or prescription, most allergy pills work by releasing chemicals into the body that bind naturally to histamine — the protein that reacts to the allergen and causes an immune response — negating the protein's effect.

Other allergy remedies attack the symptoms at the source. Nasal sprays contain active ingredients that decongest by soothing irritated blood vessels in the nose, while eye drops both moisturize and reduce inflammation. Doctors may also prescribe allergy shots, Josephson said.

For kids, allergy medications are tricky. A 2017 nationally representative poll of parents with kids between ages 6 and 12 found that 21% of parents said they had trouble figuring out the correct dose of allergy meds for their child; 15% of parents gave a child an adult form of the allergy medicine, and 33% of these parents also gave their child the adult dose of that medicine.

Doctors may also recommend allergy shots, a neti pot that can rinse the sinuses, or a Grossan Hydropulse — an irrigating system that cleans the nose of pollens, infection and environmental irritants, Josephson said.

Alternative and holistic options, along with acupuncture, may also help people with hay fever, Josephson said. People can also avoid pollen by keeping their windows closed in the spring, and by using air purifiers and air conditioners at home.

Probiotics may also be helpful in stopping those itchy eyes and runny noses. A 2015 review published in the journal International Forum of Allergy and Rhinology found that people who suffer from hay fever may benefit from using probiotics, or "good bacteria," thought to promote a healthy gut. Although the jury is still out on whether probiotics are an effective treatment for seasonal allergies, the researchers noted that these gut bacteria could keep the body's immune system from flaring up in response to allergens — something that could reduce allergy symptoms. [5 Myths About Probiotics]

This article was updated on April 30, 2019, by Live Science Contributor Rachel Ross.