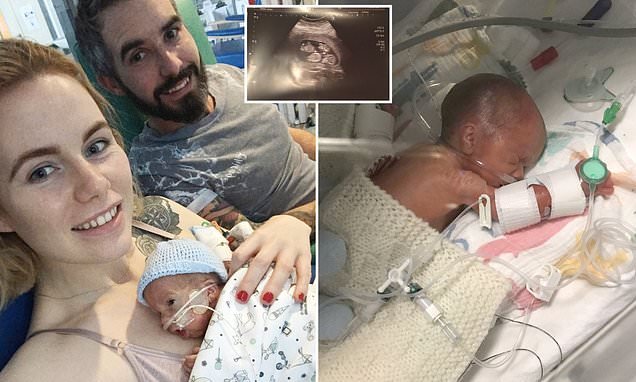 A mother has revealed how her premature baby defied the odds to survive after a rare condition killed his identical twin brother in the womb.

Hannah Robertson, 26, was diagnosed with twin-twin transfusion syndrome (TTTS) after she endured crippling back pain at 26 weeks pregnant.

This occurs when abnormal blood vessel connections form in the twins’ shared placenta, which prevents blood from flowing evenly between the babies.

The day after she was diagnosed, a scan confirmed baby Felix’s heart had stopped beating, while his twin Bowie was fighting for his life.

Bowie spent the next three months in intensive care where he battled kidney failure, pneumonia and sepsis before finally being strong enough to go home to Rosyth in Fife. 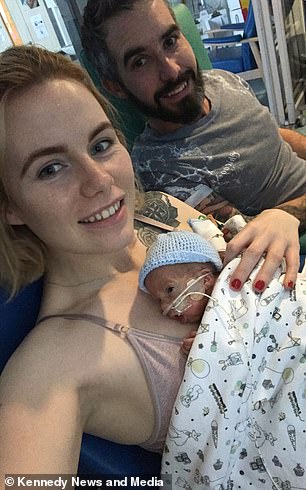 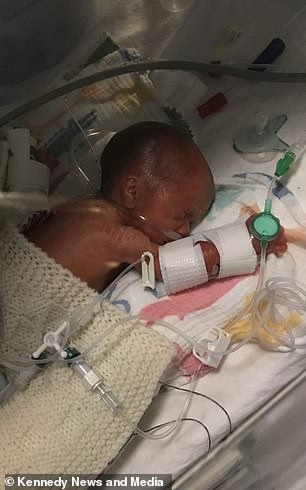 Hannah Robertson has revealed how her premature baby Bowie (pictured left and right as a newborn weighing 1lb 12oz) defied the odds to survive after a rare condition killed his identical twin brother in the womb. Miss Robertson is also pictured left with her partner Kenny Moyes 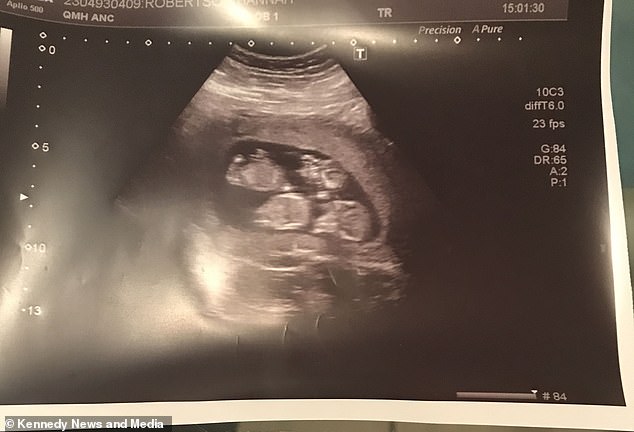 Miss Robertson discovered she was expecting twins during an early scan (pictured) on January 27. However, a later scan revealed one of the babies had died due to twin-twin transfusion syndrome, which occurs when blood does not flow evenly between the babies

Speaking of her diagnosis, Miss Robertson, who is in a relationship with 33-year-old Kenny Moyes, said: ‘I went in for that scan and just knew something was wrong.

‘When I looked at the screen I couldn’t see anything moving. There were about ten people in the room and it went so quiet.

‘Then the doctor put his hand on my leg and I heard the words I never imagined I would hear, “I am so sorry but one of your babies’ hearts has stopped beating”.

‘Any air I had breathed in was gone and I felt like I couldn’t breathe anymore. I shot up from the bed. I needed to get out the room straight away.

‘I just panicked and kept thinking “this cannot be happening”. They took us into a counselling room and explained to me and my mum what had happened.’

Doctors explained Felix had received too much blood, which caused him to develop hypertension and an enlarged bladder. This put a strain on his heart, causing it to stop beating.

‘He was getting pumped with too much fluid and too much blood, and it was making his brain swell,’ Miss Robertson said. ‘His body was working too much, and he suffered heart failure and died.

‘But Bowie was getting all the fluid taken away from him so he was going into kidney failure.’

Miss Robertson, who attended the scan without Mr Moyes, then had to break the devastating news to her partner over the phone.

‘He was screaming and kept asking “what?”,’ she said. ‘He just couldn’t understand what was happening.’ 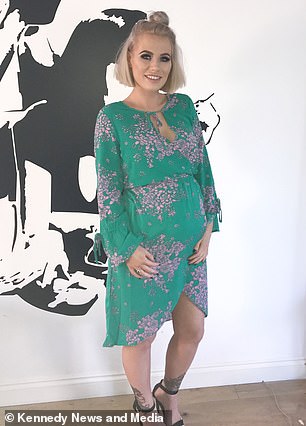 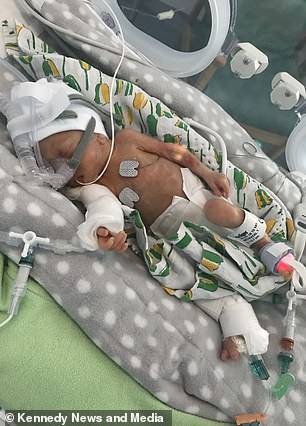 Miss Robertson (pictured left while expecting) enjoyed a ‘perfect’ pregnancy until she developed crippling back pain at week 26. In the first 79 days of his life, Bowie (pictured left in intensive care) endured five blood transfusions, sepsis, pneumonia and near blindness 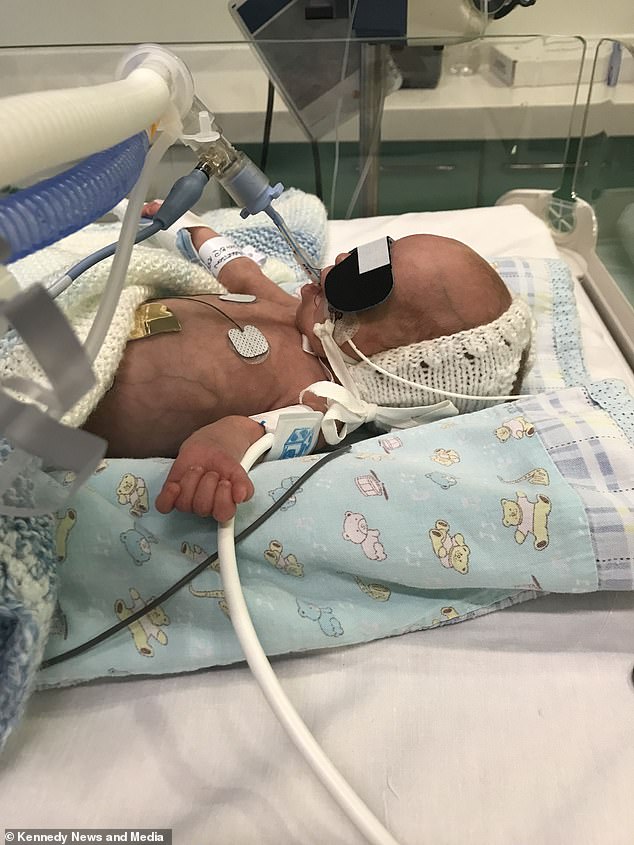 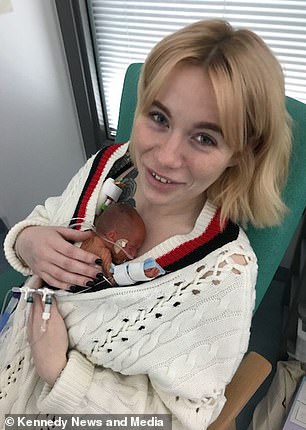 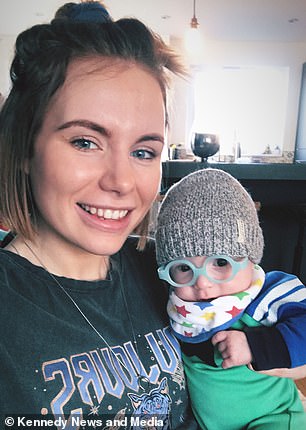 Miss Robertson is pictured left holding Bowie for the first time when he was four days old and right with the healthy youngster, who is approaching his first birthday, at home

Miss Robertson noticed her bump (pictured left) was uneven but thought the twins were both on one side. She now knows this was because all the amniotic fluid from Bowie’s side had drained to his brother Felix. She calls Bowie (pictured together right recently) her ‘starman’

After discovering she was pregnant on December 28, 2017, an ‘impatient’ Miss Robertson booked an early private scan on January 27.

This revealed two heartbeats, leaving the parents-to-be thrilled that they were expecting twins.

‘I remember when we found out we were having identical twins, we were given a leaflet to read about TTTS but it never sounded alarming and I didn’t have any of the symptoms,’ Miss Robertson said.

Apart from having a particularly large bump, which the mother-to-but put down to carrying twins, Miss Robertson enjoyed a ‘perfect’ pregnancy until week 26. And she underwent scans every two weeks to ensure both babies were healthy.

But things took a turn for the worse when Miss Robertson, who has a history of sciatica, developed back pain.

After a few days, she called her local hospital on June 3, and was told to rest and take painkillers.

When she called again two days later, doctors told her to have a bath and fizzy drink, and ring back in an hour if things had not improved.

By this time Miss Robertson was in tears from the pain and made her way to hospital. A scan then revealed her twins had TTTS.

‘When the doctor told us it looked like our twins had TTTS, I completely broke down,’ she said. ‘I couldn’t believe this was happening.

‘My pregnancy had been perfect. I never felt healthier. I looked about nine months pregnant when I was only six months but I put it down to having twins.

‘One side of my bump was fuller than the other but I thought both babies were sitting on one side.’ Miss Robertson now knows this was because all the amniotic fluid from Bowie’s side had drained to his brother Felix. 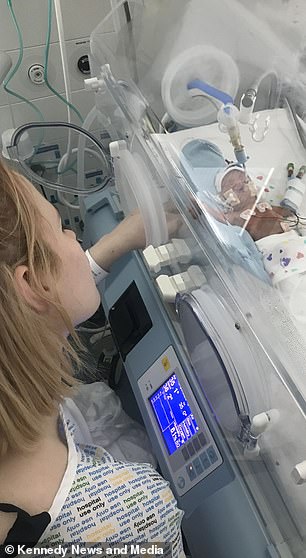 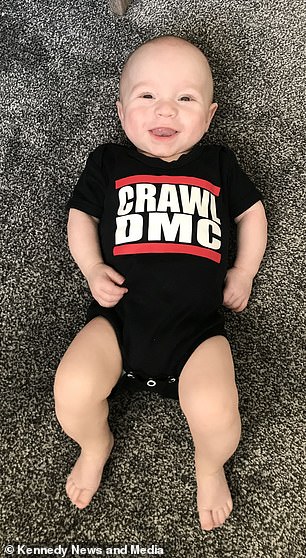 Miss Robertson is pictured left meeting Bowie for the first time while he fought for his life. The youngster (pictured right recently) is now ‘doing great’ and ‘meeting all his milestones’ 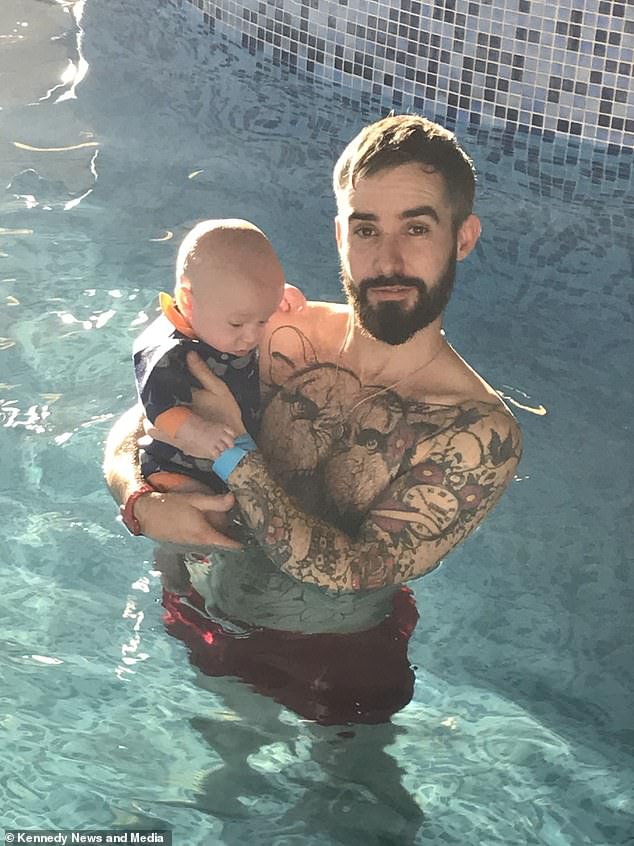 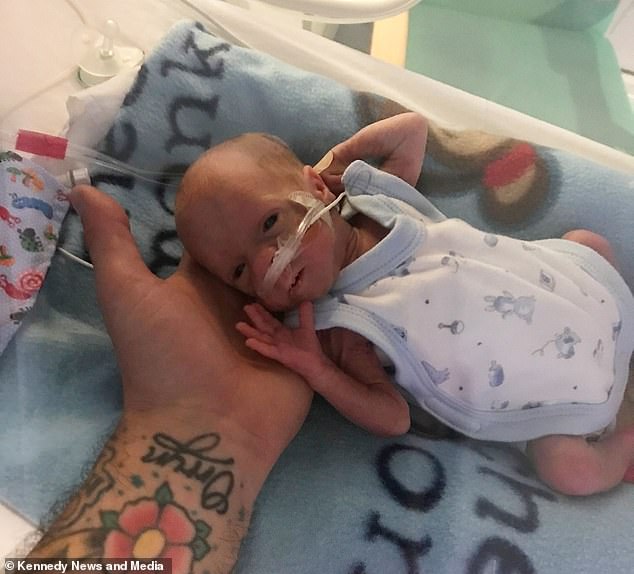 After the diagnosis, the couple told themselves everything would be fine, with the twins just requiring laser surgery to treat their TTTS. Laser surgery seals shut the abnormal blood vessels, with surgeons then draining the excess fluid.

‘I was never really aware both my babies could die,’ Miss Robertson said. ‘Even after the diagnosis, we thought I was going to go and get the laser surgery and everything would be fine.

‘In that moment I was worrying about things like the fact I was still meant to be working full time.’

However, the next morning, before Miss Robertson could be taken to surgery, Felix’s heart had stopped beating.

‘My mum asked if things might have been different if I’d been seen when I first called on June 3 and he said he didn’t know,’ Miss Robertson said.

‘It’s nobody’s fault but since then we’ve been living with this big “what if” hanging over us.’ 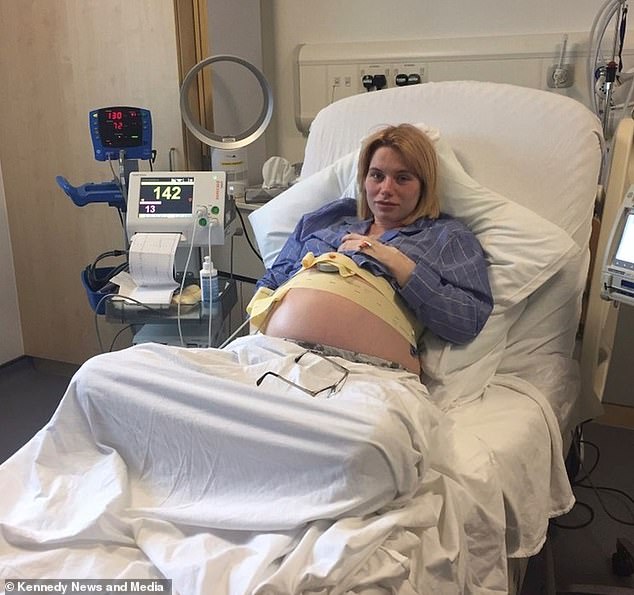 Miss Robertson is pictured in hospital before her twins were delivered via C-section on June 11. She knew Felix died and hoped to continue her pregnancy to give Bowie the best chance

The heartbroken parents were told Bowie’s best chance of surviving was for Miss Robertson to continue with her pregnancy. The surgery didn’t go ahead.

Determined to carry Bowie to full term, she went into ‘auto-pilot’ and took comfort from knowing Felix was still with her.

‘I was totally emotional with everything that was happening but I felt like at least I have got a bit longer with him,’ Miss Robertson said.

‘Now it was about doing everything possible for Bowie. I went into autopilot. I remember getting so angry with everyone and telling them ‘”we can be sad later”.

‘I wasn’t forgetting about Felix but I needed everyone to remember I was still pregnant, I was still having a baby and I didn’t want that experience to be tarnished with sadness.

‘The doctor told me to stay healthy, to keep upbeat and positive and that was my plan. Looking back I don’t know how I was going to manage it.’ 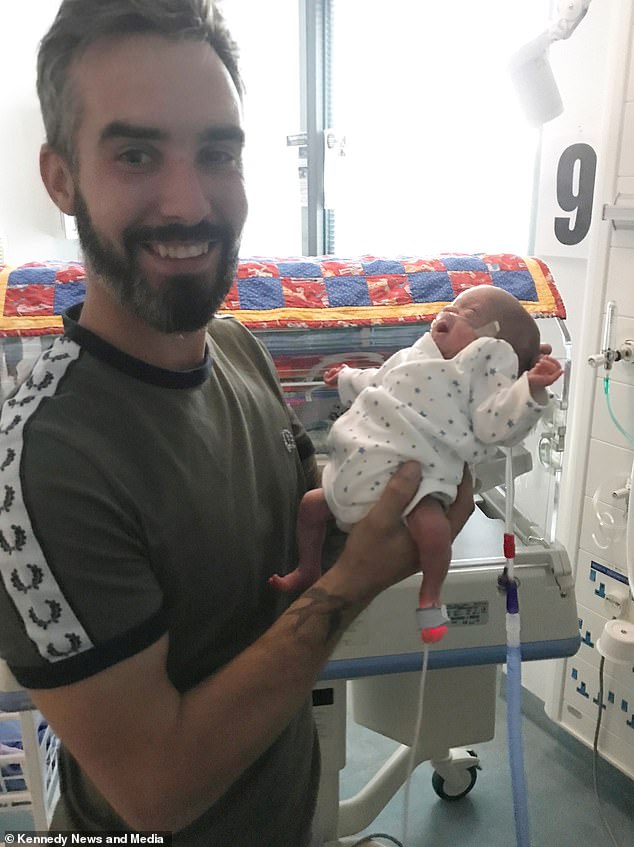 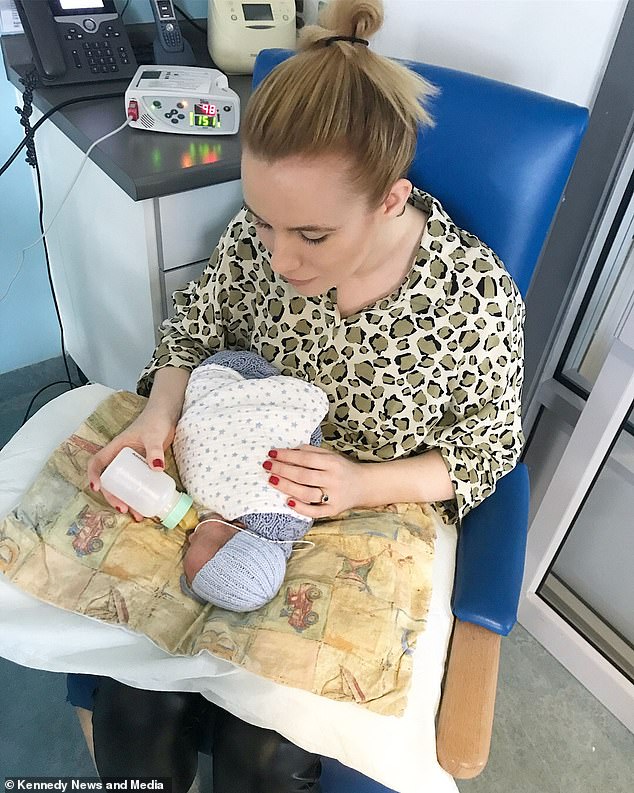 The mother-to-be was discharged from hospital, but as she was packing her bag to head home, her waters broke.

‘I remember thinking I had wet myself but when I went to the toilet I realised my waters had broken,’ Miss Robertson said.

‘I remember thinking “I just wanted a baby, why is this happening?”. I managed to stay pregnant for five days.’

In the early hours of June 10, Miss Robertson started to experience contractions and the twins were delivered via C-section the next morning.

The new parents got to spend spend some time with Felix’s body before meeting Bowie, who had been rushed to neonatal intensive care.

‘After they stitched me back up, they brought Felix to us and it was perfect. I’m so glad we got to do that.

‘I wasn’t sure if we were making the right decision but once I held that little boy I knew it was the best decision to meet him and hold him for as long as we could even if it wasn’t how we ever imagined.’

‘Then we went to meet Felix. He was so small, he could have fit in the palm of my hand. It was totally bittersweet. Every single happy situation was.’ 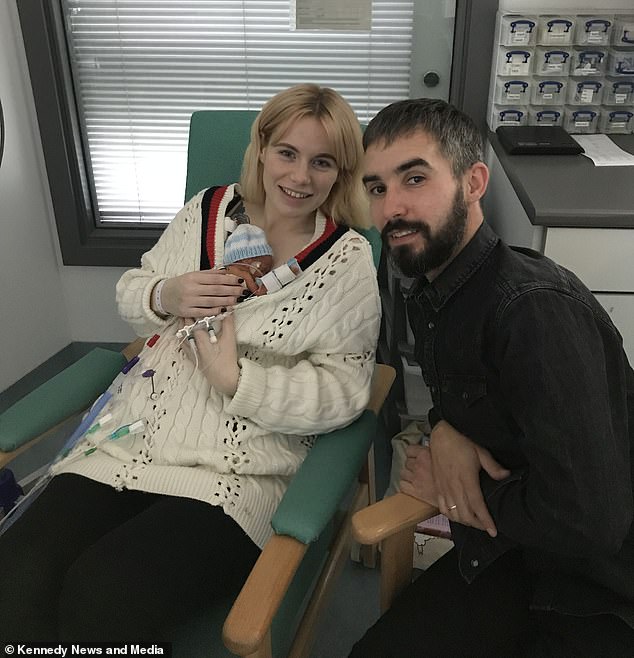 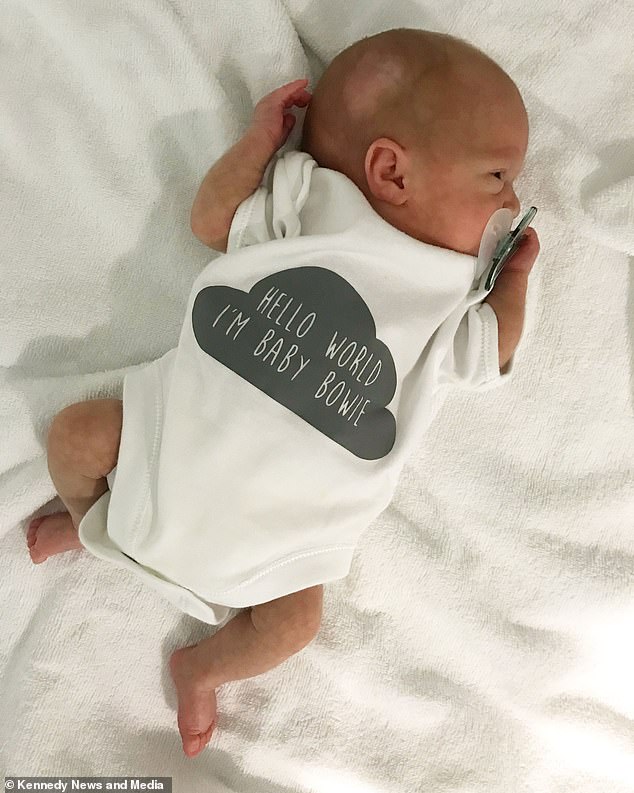 Despite all he endured, Bowie gradually grew stronger and was eventually able to go home 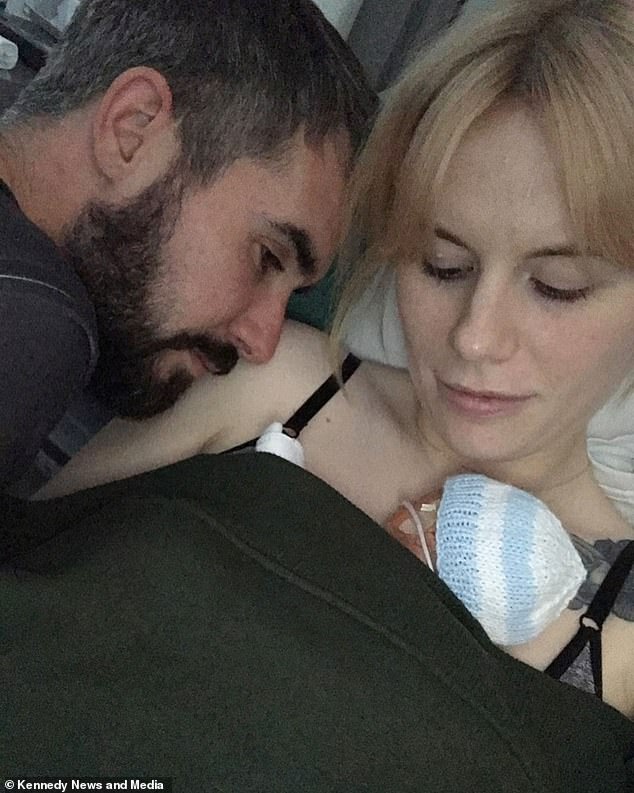 Over the next few months, the grieving couple organised a funeral for one of their sons while watching the other fight for his life.

The now 11-month-old has since gone from strength-to-strength and is meeting all his milestones.

‘At first he was so tiny he looked like he was wearing a leather jacket because his skin was too big for his body,’ Miss Robertson said.

‘He’s meeting all his milestones. He’s doing great. We call him our Starman.

‘He’s a total character and he’s got this strength he’s had since birth. There’s no telling him what to do, he tells us what to do.

‘I have a feeling he is going to totally rule my life. He’s even more precious than he would have been because of what he has survived.’

And the couple are eager to tell Bowie about the twin he lost. ‘There was a time I was so angry I thought let’s hide everything away but now I want Felix to be involved in everything,’ Miss Robertson said. ‘At the end of the day, he was my firstborn.’

Since the ordeal, Miss Robertson has been keen to raise awareness of TTTS .

She was invited to share her sons’ story with healthcare professionals and has since been asked to film the talk so it can be used for training sessions.

‘If I had had more information, would that have changed the outcome?,’ Miss Robertson said. ‘We don’t know but from now on there shouldn’t be any more “what ifs”.

‘TTTS is rare and it is less likely to happen after 27 weeks however it does still happen. Just because we all live our lives thinking “that won’t happen to us” doesn’t mean that it won’t.

‘There’s no cure for TTTS but if people noticed the symptoms earlier at least they would be able to say “we tried everything” and they wouldn’t have to live with “what ifs”.’

WHAT IS TWIN-TWIN TRANSFUSION SYNDROME?

Twin-twin transfusion syndrome is a rare but serious condition that can occur in identical pregnancies when twins share a placenta.

Abnormal blood vessel connections form in the placenta and prevent blood from flowing evenly between the babies.

One twin then becomes dehydrated, which affects its growth.

The other develops high blood pressure and produces too much urine.

This leads to an enlarged bladder and excessive amounts of amniotic fluid, which can put a strain on the twin’s heart, leading to heart failure.

Without treatment, TTTS can be fatal for both twins.

The condition occurs in about around 15 per cent of identical twins who share a placenta, according to the charity Tamba.

Around 300 twins die from the condition every year in the UK, while 6,000 babies are affected annually in the US.

If this is not enough, laser surgery is used to seal shut abnormal blood vessels and permanently disconnect them.

The surgeon then drains excess fluid.

Even when treated successfully, most TTTS babies are born premature.

However, the majority go on to have long, healthy lives.