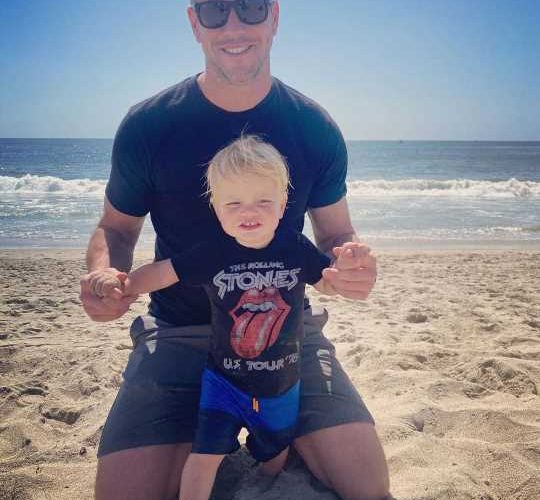 Ant Anstead can always count on his son to be by his side during life's more hectic moments.

On Tuesday, the 42-year-old Wheeler Dealers host shared an adorable clip of time spent house-hunting with his young son, Hudson London, whom he shares with his ex Christina Haack.

In the video, Anstead sings "Wheels on the Bus" to his 19-month-old son, who happily dances along to the children's song. Waving his arms along to the tune of his father's voice, Hudson then mimics his father at one point, pretending to honk the horn of a school bus.

"The roller coaster of house hunting…. Hudzo and I have GOT THIS (sort of)," Anstead wrote alongside the post on Instagram. "He truly loves to dance x."

While chatting with PEOPLE last month, the father of three — his son Archie, 14, and daughter Amelie, 17, from his first marriage, live in the U.K. with their mom — shared that he is currently house-hunting in Laguna Beach in the hopes of finding a place that he can call home for himself and Hudson.

He and Haack, 37, share custody of the toddler, and Haack lives in nearby Newport Beach.

"I feel like I need a home. It's been over six months now," Anstead said of his attempts to find a place of his own after moving out of the home they used to share while renting.

"A home creates an anchor for the rest of your life. So while all these great things are going on, I've got the TV projects and a new book coming out, and Hudson and I are rolling around, having a great time, I still feel displaced," he continued. "So I feel like if I can find a home, I can really start to rebuild from there."

Haack announced that she and Anstead were separating after less than two years of marriage on Instagram in September 2020, just a year after they welcomed their son Hudson.

"Ant and I have made the difficult decision to separate. We are grateful for each other and as always, our children will remain our priority," Haack wrote at the time. "We appreciate your support and ask for privacy for us and our family as we navigate the future."

The pair began dating in October 2017 and tied the knot more than a year later. Haack officially filed for divorce and for joint custody of Hudson in November 2020.