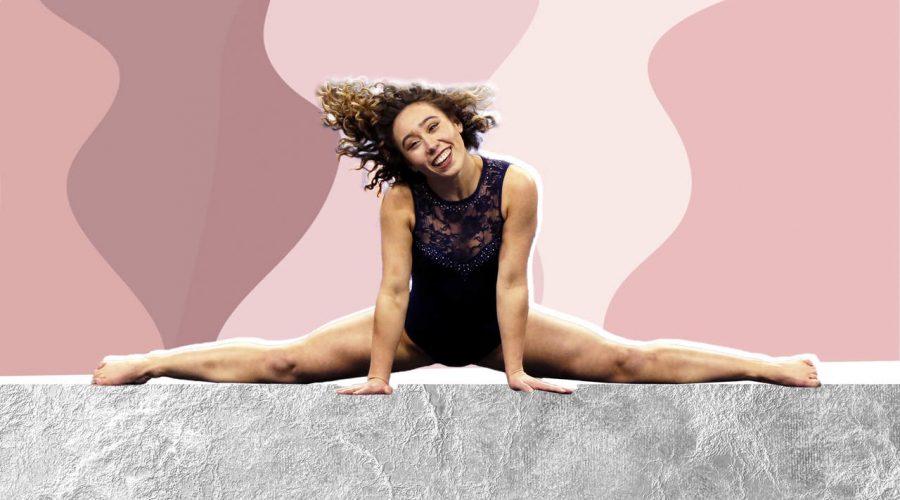 Remember back in January when former UCLA gymnast Katelyn Ohashi delivered her jaw-dropping floor routine that earned her a perfect 10.0 score? (If not, watch it here ASAP). Now, Ohashi is making jaws drop again—this time with a nude photo shoot for ESPN The Magazine's Body Issue, which also reveals her rare skin condition.

In the interview that accompanies her (totally badass) photo shoot, Ohashi, 22, revealed that she has a skin condition called granuloma annulare. The condition "covers my entire body," she said, referring to the bumps on her body in the photos. "Some look like bruises; some are complete circles."

“a line of dots following a pattern but one stands out, it’s clearly an outlier that’s direction needs to reroute. alienated and put to the side in order to not be seen, studied through a screen, thinking that maybe if we can match a name to it, we’ll all suddenly become immune like any vaccine. experiencing anything that isn’t explained or doesn’t belong to the majority will make you alone, and anyone who wants to stay “normal” will hide in order to not be shown. the outlying dots were marked on my skin, to remind me that being different is no longer sin. these marks are the reminders of everyone fighting around. the ones that are no longer seen because they were cast down. the ones that aren’t lost just never wanted to be found. and the ones that just needed someone else to make a sound. multiple mediums where too many negative energies can surface. as if not commenting the hurtful message would somehow be doing a disservice. each time my skin sheds away making more room to grow. not to make room for anyone else but to let my own true colors show. proud of who i am and what my body reveals, no longer am i concerned about who it appeals. too thin, too fat, but it’s not anyone else’s job to decide all that. having a voice loud enough blocks everyone else out, but when there’s that lingering doubt every compliment received will go unnoticed like a drought. amour de soi is the only natural form of self love. once that’s reached, nothing will rise above. we weren’t meant to have it all, but make the best out of what we have every single day. i’m proud of my body and all its imperfections, that’s all i have to say.” ~ katelyn ohashi. @espn #espnbodyissue2019 photographer: @danascruggs ?

Ohashi said the condition doesn't affect her, but that people will ask her about it. "People are like, 'What's wrong with your stomach?'" she said. She added that she used to feel "ashamed" of the marks, and that she "didn't like posting pictures in my swimsuit or showing my stomach."

But now, Ohashi feels a sort of duty to share her condition. "Now I feel like it's important to show it because so many people try to hide it," she said. And in doing so, she's also helped others do the same. "Recently someone said, 'I was able to take the bandage off my hand to show my granuloma because you inspired me,'" she said. "That was such an amazing thing to hear. Why should we have to hide?"

What is granuloma annulare?

According to the Genetic and Rare Diseases Information Center (GARD), a division of the National Institutes of Health, granuloma annulare (GA) is skin disorder that causes a rash with red bumps arranged in a circular pattern. The condition is not cancerous or contagious, per the GARD.

There are two main types of granuloma annulare: localized GA, which is the most common and affects the forearms, hands, or feet; and generalized GA, which presents with slightly larger, raised rashes that can appear anywhere on the body, mainly the trunk or torso. The rashes associated with granuloma annulare don't usually cause itching and pain, and can clear without leaving any scarring.

While the cause of granuloma annulare is still unknown, researchers believe it may be triggered by an immune or inflammatory response, per the GARD. But the condition has also been known to follow insect bites, sun exposure, tattoos, and infections, among other things.

As far as treatment options go, if granuloma annulare isn't causing symptoms like itching or pain, it doesn't necessarily need to be treated, per the GARD. If symptoms are present, treatment options include topical steroid creams to reduce the inflammation, cryotherapy (aka, freezing the lesions), and laser or light therapy. For most people, granuloma annulare goes away within a few years, though cases of generalized GA tend to last longer than those of localized GA.

Props to Ohashi for opening up (unapologetically!) about her skin condition—and for wearing it proudly in a nude photo shoot.

To get our top stories delivered to your inbox, sign up for the Healthy Living newsletter.

Related posts:
06/09/2019 Personal Health Comments Off on Gymnast Katelyn Ohashi Just Revealed the Rare Skin Condition That Covers Her 'Entire Body' in a Nude Photo Shoot
Categories
Recent Posts
We and our partners use cookies on this site to improve our service, perform analytics, personalize advertising, measure advertising performance, and remember website preferences.Ok