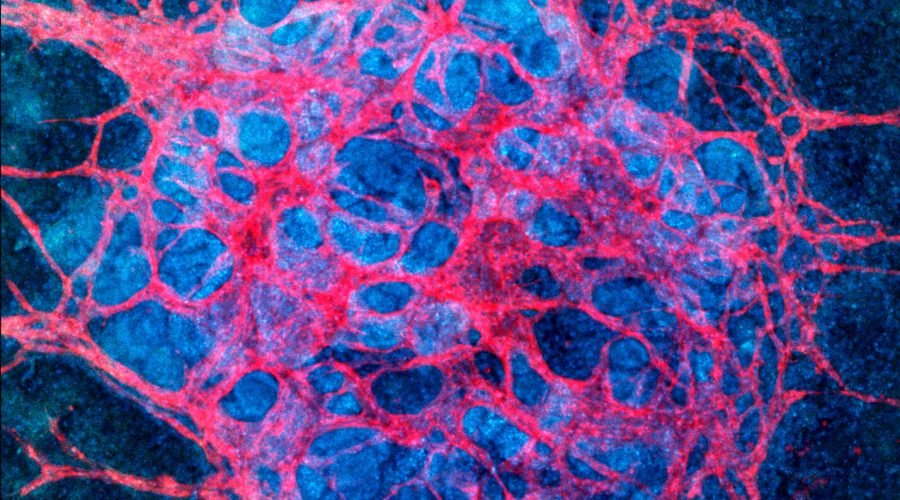 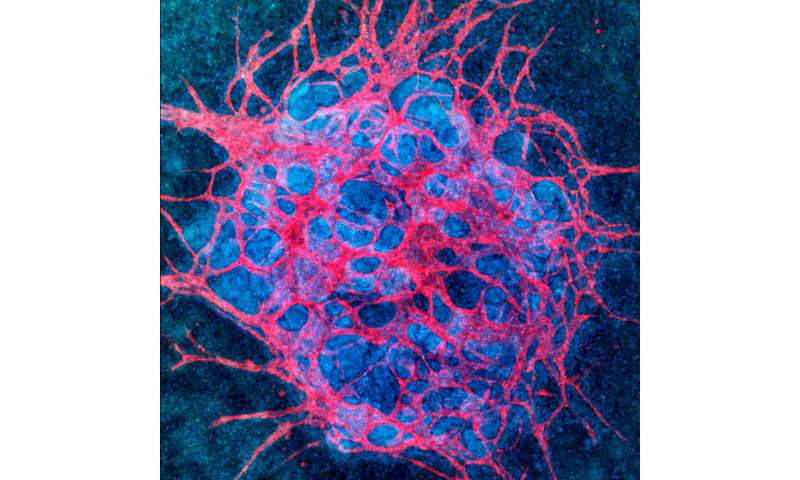 In recent years, researchers have created mini-organs known as organoids in the culture dish that contain many of the cell types and complex microarchitectures found in human organs, such as the kidney, liver, intestine, and even the brain. However, most organoids grown in vitro lack the vasculature required to provide oxygen and nutrients, remove metabolic waste, and facilitate communication between different cell types that drives their maturation into truly functional tissue building blocks.

Now, a research team at the Wyss Institute for Biologically Inspired Engineering, the Harvard Paulson School of Engineering and Applied Sciences (SEAS), Brigham and Women’s Hospital, and the Harvard Stem Cell Institute led by Jennifer Lewis and Ryuji Morizane has developed a powerful new approach as part of the Institute’s new 3-D Organ Engineering Initiative. By exposing stem cell-derived organoids to fluidic shear stress, they were able to significantly expand organoid-derived vascular networks, and improve the maturation of kidney compartments in comparison to previous static culture methods. The work is published in Nature Methods.

In 2015, Ryuji Morizane and Joseph Bonventre developed a method that enabled them to derive 3-D kidney organoids from human pluripotent stem cells. “While our organoids and those generated in other laboratories contained large numbers of well-organized nephrons and primitive blood vessels, they still lacked pervasive vascular compartments with perfusable lumens,” said co-corresponding author Morizane, M.D., Ph.D., Assistant Professor at Brigham and Women’s Hospital and Harvard Medical School (HMS), and a member of the Harvard Stem Cell Institute.

More recently, researchers around the world have matured kidney organoids by implanting them into animals where they can connect to the host’s vasculature in vivo. “For the first time, our study demonstrates that by exposing growing organoids to fluid flow, a mechanical cue known to play an important role for tissue development in the body, we can greatly enhance their vascularization and maturation in vitro,” said Morizane.

To accomplish this feat, the team used expertise from the Lewis lab that has pioneered strategies to create vascularized human tissues, including 3-D kidney-on-chip models, using 3-D bioprinting that can be perfused and sustained for long durations. Based on these findings, they hypothesized that fluid flow could also promote the formation of blood vessels from precursor endothelial cells found in growing kidney organoids.

“We determined the right combination of underlying extracellular matrix, media additives, and fluidic shear stress under which human stem-cell derived organoids would flourish when grown in our 3-D-printed millifluidic chips,” said Kimberly Homan, Ph.D., who with Navin Gupta, M.D., is a first author on the study. Gupta added that “the vascular networks form close to the epithelial structures that build the glomerular and tubular compartments, and in turn promote epithelial maturation. This integrated process works really like a two-way street.” Homan is a Research Associate in Lewis’ group at the Wyss Institute and SEAS, and Gupta is a Clinical Research Fellow working on Morizane’s team at the Brigham.

The vessels growing on the 3-D-printed chips form an interconnected network with open lumens, which can be perfused with fluids as confirmed by directly imaging fluorescent beads moving freely through them. “We were excited to see that these vascularized glomerular and tubular structures develop through some of the same stages that nephrons experience during normal kidney development in vivo,” said Homan.

“This important advance opens up new avenues for accurately testing drug toxicity in vitro in differentiated nephron compartments and modeling kidney diseases, like polycystic kidney disease, that affect specific structures and cell types using patient-derived stem cells as the starting point,” said co-corresponding author Lewis, Sc.D., who is a Core Faculty member of the Wyss Institute and co-leader of its 3-D Organ Engineering Initiative. “Our method may pave the way to also vascularize other types of organoids, such as the liver organoids.” Lewis is also the Hansjörg Wyss Professor of Biologically Inspired Engineering at SEAS and a member of the Harvard Stem Cell Institute.