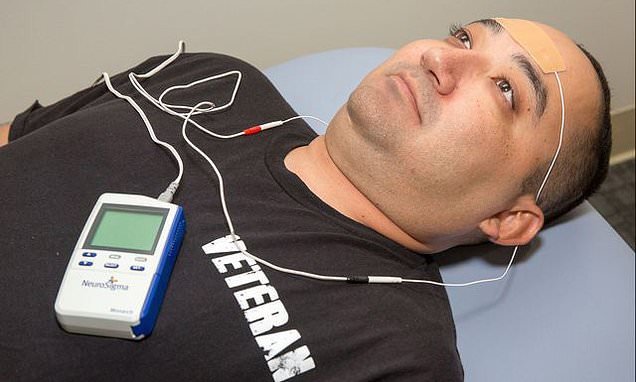 Doctors in the US can now prescribe an electronic device which zaps nerves in the forehead to treat ADHD in children.

The Food and Drug Administration (FDA) has approved the first device of its kind for use in managing children’s attention deficit hyperactivity disorder.

About the size of a mobile phone, the Monarch eTNS works by sending signals through a nerve in the face to stimulate parts of the brain which regulate behaviour and emotion. The treatment creates a mild tingling feeling on the skin.

It is the first non-medicinal ADHD therapy approved by the US drug regulator and has been hailed as an ‘innovative, safe and effective’ gadget. 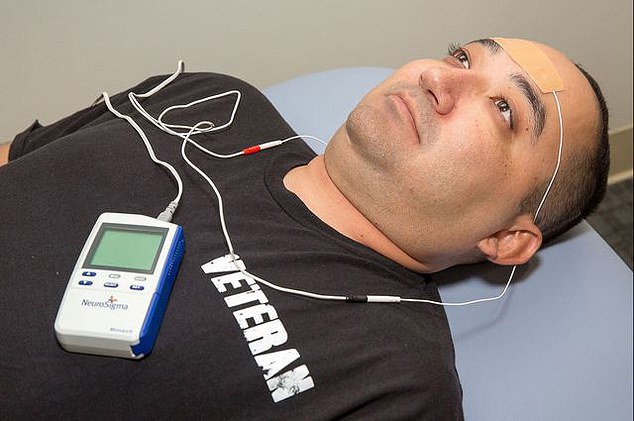 The external trigeminal stimulation device (eTNS) works by sending electrical impulses through a patch stuck to the patient’s forehead. Although the mechanism is not fully understood, these signals travel through a major nerve and into the brain. Pictured: The device has also been tested on adults suffering from post-traumatic stress disorder

One in 20 children in the US are believed to have ADHD – more than six million under-17s had a diagnosis in 2016, according to official figures.

The behavioural disorder is generally noticed in childhood and affects boys more than girls.

Those with ADHD may have trouble concentrating, a short attention span, difficulty sitting still, and often talk or move around an unusual amount.

The battery-powered Monarch eTNS (external trigeminal nerve stimulation) device works through a patch which is stuck onto the child’s forehead when they sleep.

Approved for seven to 12-year-olds, the gadget sends low-level electrical impulses into the trigeminal nerve and into the brain.

Exactly how this treats ADHD isn’t clear, the FDA said, but it is believed to stimulate the brain’s thalamus and cortex, which control attention, behaviour and emotions.

NeuroSigma, the company marketing the prescription-only device, claims it can cut ADHD symptoms by 44 per cent in seven to 14-year-olds.

However, the gadget will cost $1,000 for now as it isn’t currently covered by health insurance providers.

‘This new device offers a safe, non-drug option for treatment of ADHD in pediatric patients through the use of mild nerve stimulation, a first of its kind,’ said Dr Carlos Peña, an FDA spokesman. 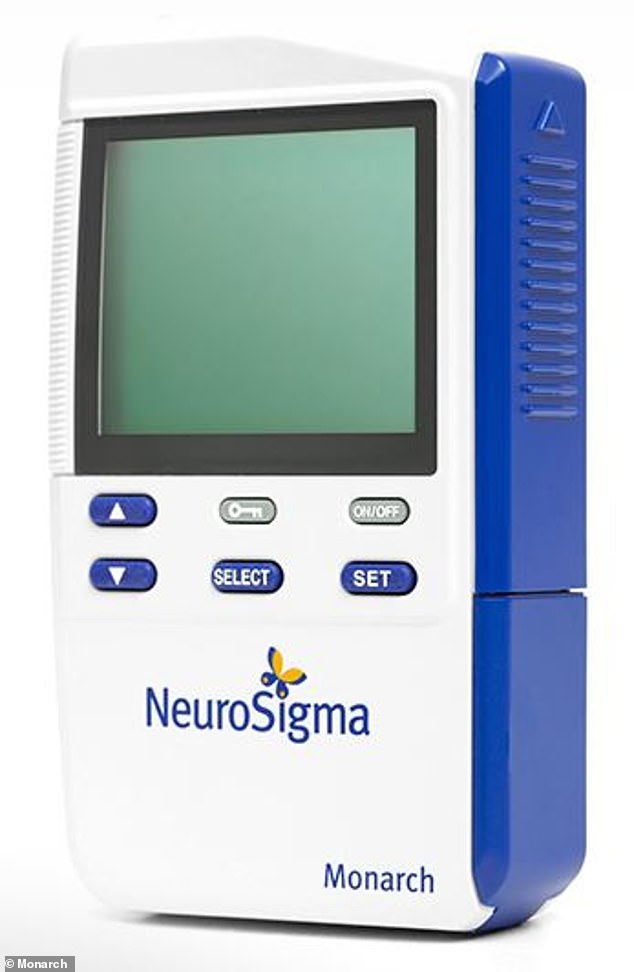 HOW DOES THE ZAPPING DEVICE WORK?

These low-level impulses travel into the trigeminal nerve in the face and move deep into the brain.

Although exactly how this stimulation reduces ADHD symptoms isn’t known, the trigeminal nerve has direct connections with the thalamus and cortex areas of the brain, which influence behaviour, attention and emotion.

If ADHD patients have irregular, abnormal activity in that area of the brain, regulated electrical signals may help to restore rhythm to the region.

NeuroSigma, which is marketing the eTNS gadget, claims using it for a month can cut ADHD symptoms by as much as 44 per cent.

A study found children who used it saw a 72 per cent bigger reduction in symptoms after four weeks than children given a placebo treatment.

The Food and Drug Administration has approved the device for prescription to seven to 12-year-old children in the US.

‘[FDA approval] reflects our deep commitment to working with device manufacturers to advance the development of pediatric medical devices so that children have access to innovative, safe and effective medical devices that meet their unique needs.’

Children with ADHD are usually treated with drugs designed to boost concentration, such as Ritalin and Adderall.

But these medications can have side effects such as nervousness or anxiety, sleep problems, loss of appetite and weight loss.

A trial of the eTNS device on 62 children with moderate to severe ADHD found it significantly reduced their symptoms after four weeks.

On a sliding scale on which lower means less severe symptoms, device users’ ADHD scores dropped from an average of 34.1 to 23.4 (10.7 points) during the study.

Potential side effects of the device include drowsiness, an increase in appetite, trouble sleeping, teeth clenching, headache and fatigue – but there have been no ‘serious’ negative effects, the FDA said.

Dr Jeffrey Borenstein, chief executive of the Brain & Behaviour Research Foundation in the US, told CBS: ‘Untreated, these folks can have other psychiatric problems, including depression, chemical dependency, trouble learning in school, and trouble with the law.’

The eTNS device has also been tested and shown some success in treating adult patients who suffer from depression and post-traumatic stress disorder (PTSD).

Symptoms typically appear at an early age and become more noticeable as a child grows. These can also include:

Most cases are diagnosed between six and 12 years old. Adults can also suffer, but there is less research into this.

ADHD’s exact cause is unclear but is thought to involve genetic mutations that affect a person’s brain function and structure.

Premature babies and those with epilepsy or brain damage are more at risk.

There is no cure.

A combination of medication and therapy is usually recommended to relieve symptoms and make day-to-day life easier.