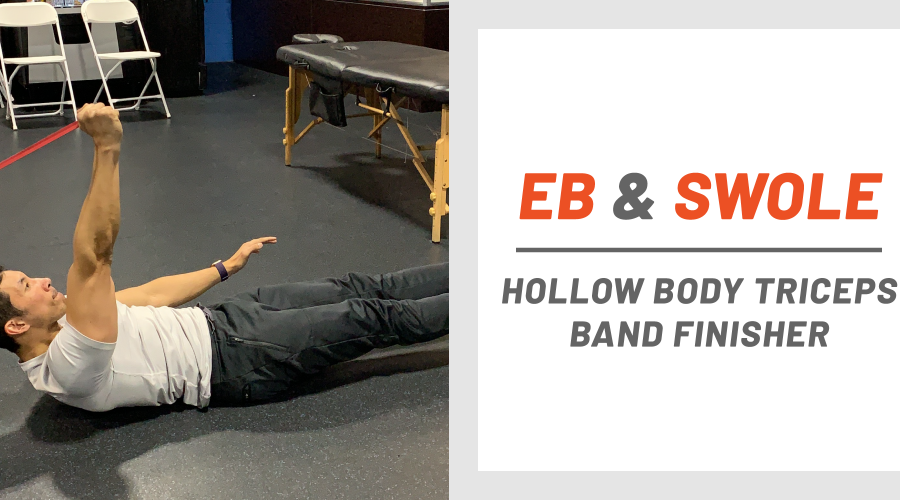 Many lifters close out their workout with a punishing ab circuit, taking the opportunity to isolate their core after focusing on other muscle groups during their session. But that doesn’t have to be the only way you cap out your lifts—why only work one muscle group when you can double down?

“[The finisher] addresses an issue that many guys have on skullcrushers, a tendency to slip into thoracic extension, arching through the back and opening the ribcage to make up for a lack of shoulder mobility,” says Samuel. “The hollow body position doesn’t let you do that, forcing you to contract your abs and contain your ribcage throughout.”

To pull off the hollow body triceps band finisher, you’ll need an exercise band and a stable base to attach it, like a squat rack. If you don’t have a band handy, check out this option from WODFitters.

To get the most out of the triceps work, Samuel says to make sure to really squeeze on every rep.

Don’t think you get a break during the second half of the finisher just because you’re shifting positions. “The band is now closer to its origin, so the resistance is slightly lighter,” says Samuel. “While the triceps load is lighter, the core challenge is tougher in this second position, because the arm lever in the hollow body has been extended.”

Use this finisher on arm days as a way to keep the pump party going into your core routine with 3 to 4 sets at the end of a triceps workout. Alternate arms back-to-back and make sure to rest for about 30 seconds between each set. According to Samuel, you’re gonna need it.

For more tips and routines from Samuel, check out our full slate of Eb and Swole workouts. If you want to try an even more dedicated routine, consider Eb’s New Rules of Muscle program.