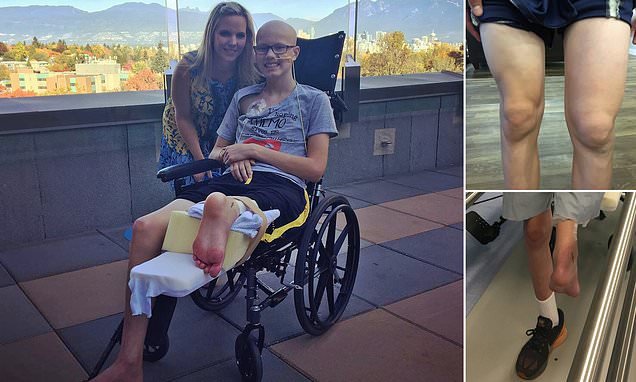 A teenager has had his knee re-created from his ankle and rotated foot after losing his leg to a rare form of bone cancer.

Jacob Bredenhof, 14, of Abbotsford, Canada, was discovered to have osteosarcoma in his leg, a type of cancer that affects growing bones.

Doctors previously believed Jacob was battling a sports injury and growing pains when his knee began to ache last year.

But his pain increased as a solid lump on his thigh grew, which was later revealed to be giant cancerous tumours which were putting so much pressure on the bone that it could have ‘snapped at any moment’.

Jacob, an avid sports player, was unsure whether to go ahead with an unusual surgery called rotationplasty in fear of judgement.

It involved removing cancer-ridden bone and turning his lower leg 180 degrees and positioning his foot where his knee used to be.

But realising he would never be able to run or play basketball again through other options, he had the surgery and will soon get a prosthetic leg. 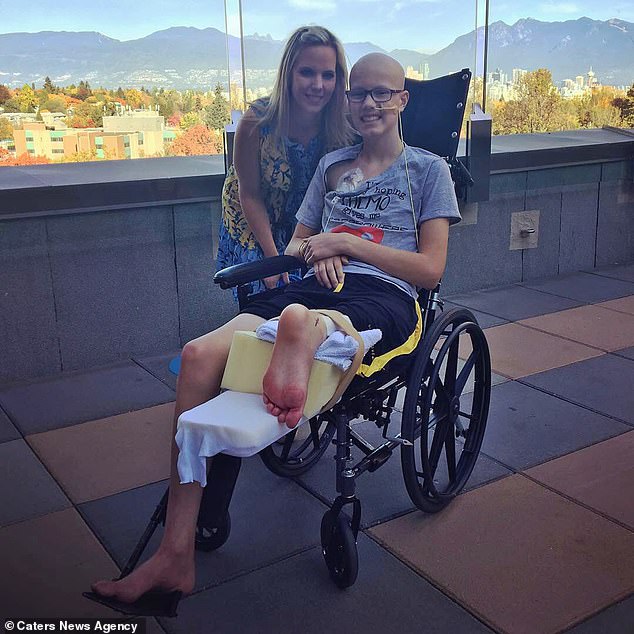 Jacob Bredenhof, 14, has had his knee re-created from his ankle and foot after losing his leg to a rare form of bone cancer called osteosarcoma 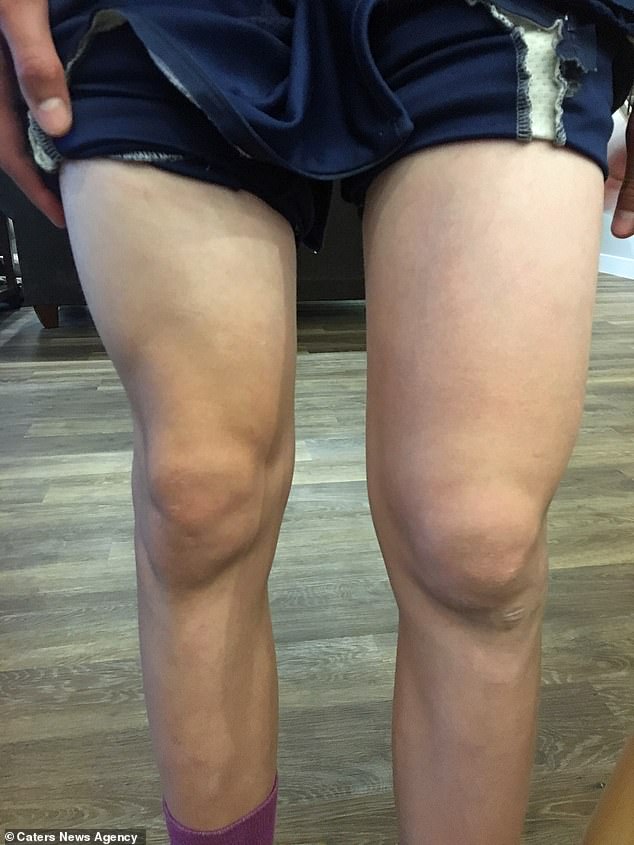 It was discovered that Jacob had two tumours at the bottom of his thigh, which doctors previously believed to be from a sports injury 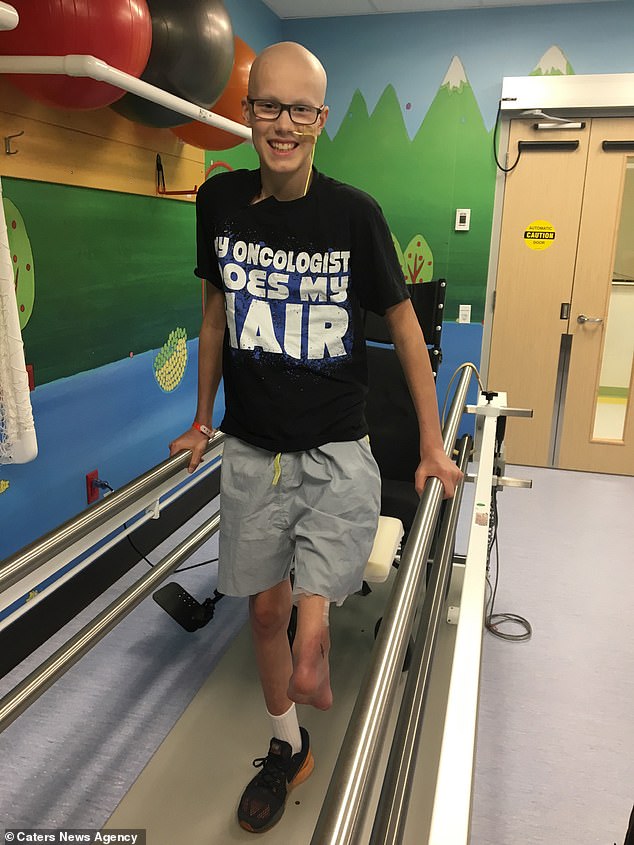 Jacob, an avid sports player, was unsure whether to go ahead with an unusual surgery called rotationplasty in fear of judgement. But he went ahead knowing that it was his only option out of all those given to him that would allow him to play sports again one day

He is on his 14th round of chemotherapy for his cancer and can now walk around on crutches.

Despite its appearance and stares from strangers, Jacob proudly shows off his new knee, flaunting it in eye-catching socks and sharing his recovery with others.

Proud mother Tracey, 34, who is her son’s full-time carer, said: ‘His femur was almost entirely full of cancer and the bone inside was so brittle that any pressure could have caused it to break.

WHAT IS A ROTATIONPLASTY?

Rotationplasty is a surgical procedure often offered to children with bone cancer around their knee joints.

The operation involves removing cancerous bone, as well as some healthy bone, to ensure a ‘clear margin’.

The lower leg is then rotated 180 degrees and reattached.

This gives the appearance of a short leg with a foot on backwards.

The foot and ankle then function as a knee joint, which allows the patient to wear more functional below-knee prosthetics.

Advantages include children being better able to perform sports and everyday activities.

‘Jacob’s first reaction to rotationplasty was “not a chance” because of the unusual appearance, which I totally understood.’

Developing a hard lump on the lower thigh led doctors to re-examine their initial beliefs that Jacob was suffering with a sports injury.

This would lead to him being diagnosed with osteosarcomas, which are cancerous tumours that grew inside the bone, most commonly affecting children and teenagers.

Each year, about 800 to 900 new cases of osteosarcoma are diagnosed in the US – of which a bout half of these are in children and teens – and in the UK, osteosarcoma accounts for just over half of childhood bone tumours, with approximately 30 new cases each year.

Ms Bredenhof said: ‘We noticed a swelling above his knee, when I touched it I was surprised because it was solid, I expected it to be soft and squishy like inflammation.

‘I thought it was very strange and didn’t know what it was, we took him to our family doctor and from his eyes I could see his grave concern.

‘Hours after they sent us for blood work and X-rays, they called to say we needed to come in. At that point I knew Jacob had cancer.

‘The doctor told is it was “the worst of the worst”.’

Later, an MRI would reveal the tumours were so severely engulfing his femur that any pressure could cause the bone to break.

Prior to the removal of the cancer infected bone, he underwent chemotherapy rounds that left him so weak he stayed in hospital for more than 150 days. 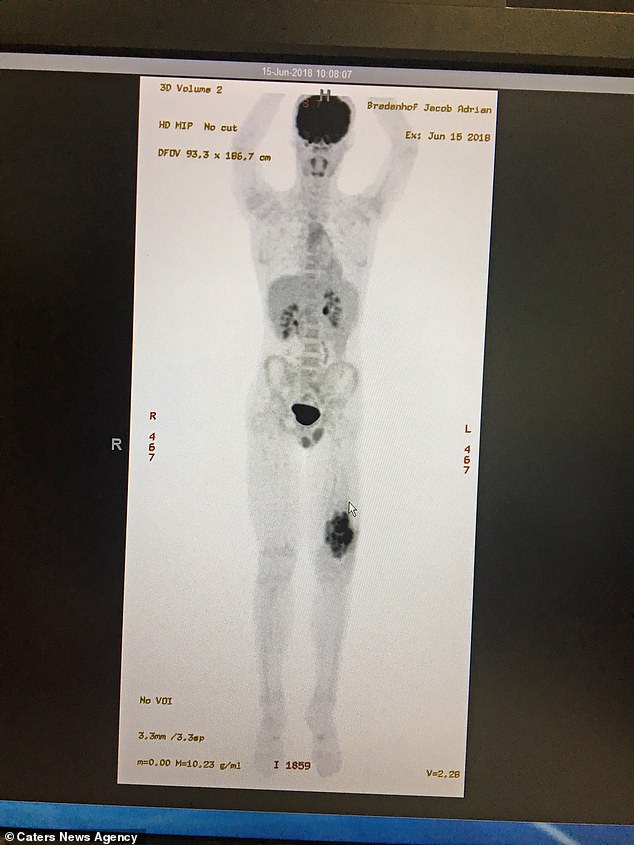 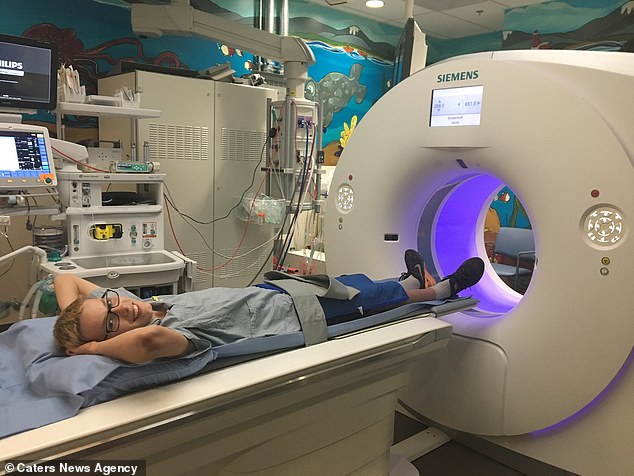 Jacob, from Abbotsford, Canada, was previously believed the teen was battling a sports injury and growing pains, after developing an aching in his knee last year 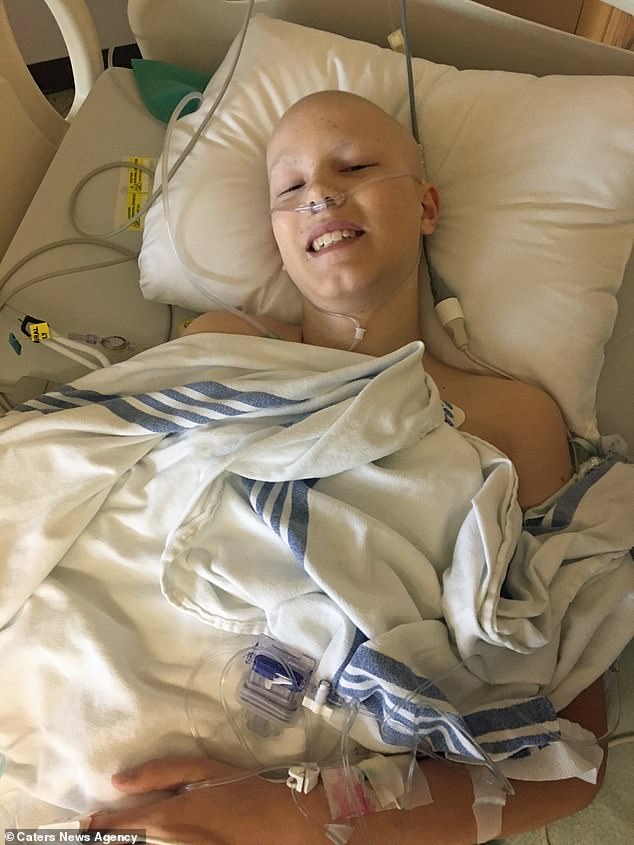 Jacob’s mother, Tracey Bredenhof, said the doctor told them his cancer was “the worst of the worst”. The tumours were putting so much pressure on the bone that it could have ‘snapped at any moment’

Ms Bredenhof said: ‘Before the surgery I told him people would stare and look at him, and that he would forever bear the mark of bone cancer.

‘I also warned him that people could say rude things that could hurt him and may not understand. But he told me, “I don’t care I want to play sports and be active”.’

Jacob had been offered other options, but these would stop him from every being able to run, play sports or trampoline again.

‘He’s very mature and his decision to have the rotationplasty showed a lot of foresight after getting over the social implications,’ Ms Bredenhof said.

After the nine-hour surgery in October, Jacob spent three weeks unable to get out of bed without assistance and in agonising pain. 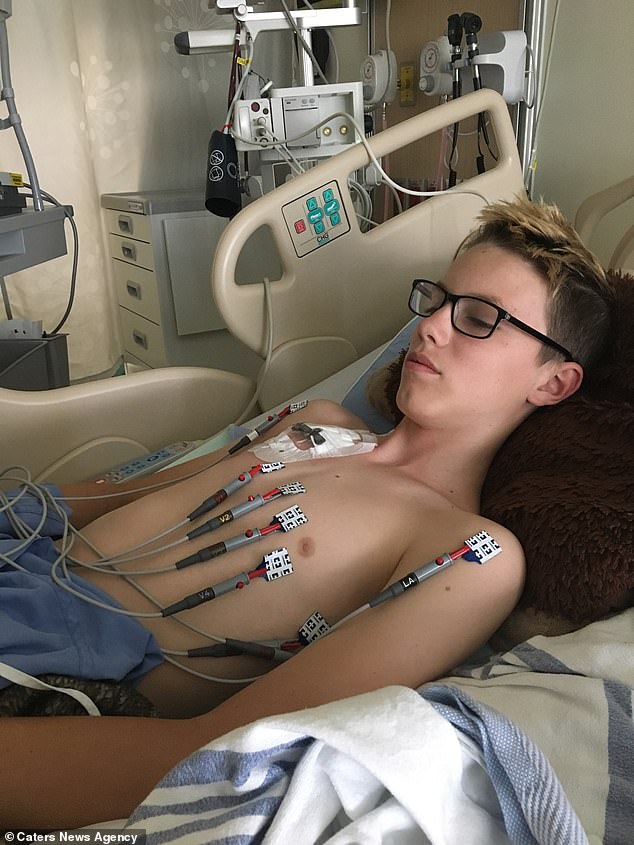 Prior to the removal of the cancer infected bone, Jacob underwent chemotherapy rounds that left him so weak he stayed in hospital for more than 150 days 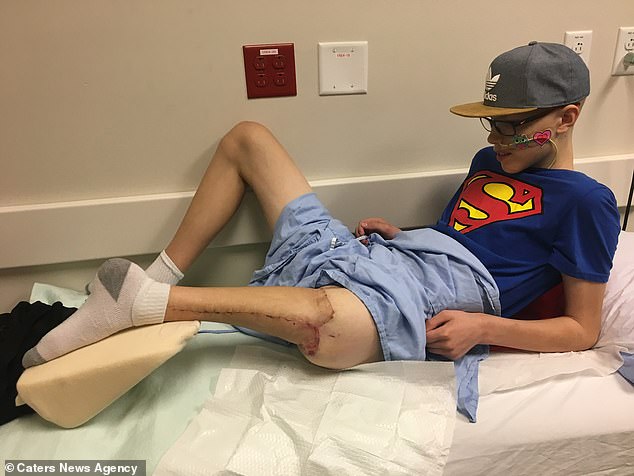 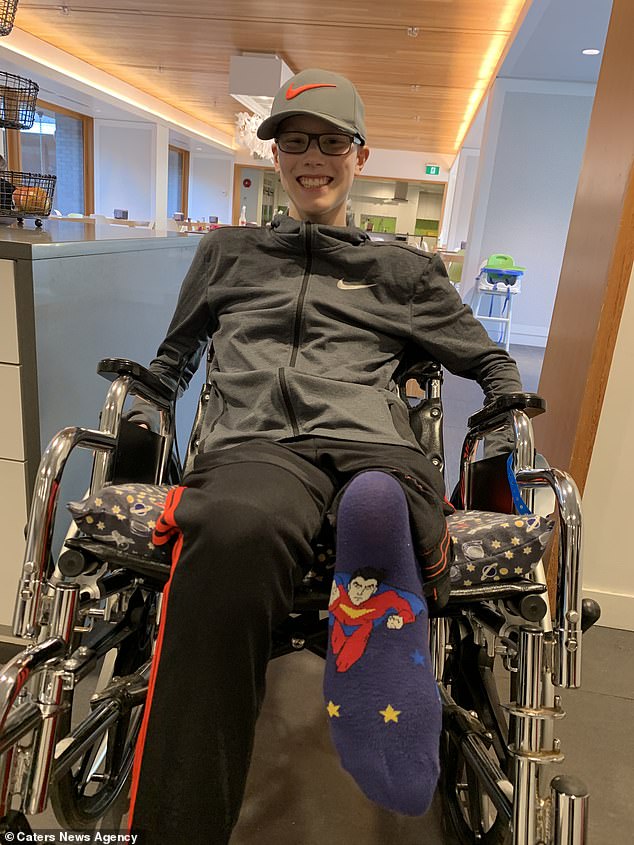 Jacob is now able to use crutches and will be able to use a prosthetic leg once he has gone through rehabilitation. Pictured, showing off his new knee with attention grabbing socks

But fortunately, the operation was a success. The operation involves removing cancerous bone, as well as some healthy bone, to ensure a ‘clear margin’.

Jacob has since undergone more chemotherapy, in the hope of blasting away any remaining cancerous cells.

Ms Bredenhof said: ‘Right off the bat he decided he wasn’t going to hide the surgery from anyone.

‘He explained, “This is me and I won’t hide it” and since then has continued to exemplify that attitude, even when people stare at us.

‘He often chooses socks to add a little to it, like a Superman one, pink flamingos, pineapples, palm trees, and other designs that are a bit more out there.

‘He is not in pain anymore. He uses his crutches to get around the house and if we go outside he uses a wheelchair if he doesn’t feel well enough.

‘He doesn’t let it stop him at all, recently he was even playing in the snow.’

In spite of his challenging situation, the teenager remains positive and is determined to continue fighting, knowing that by next year he will be fully rehabilitated and using his prosthetic leg. 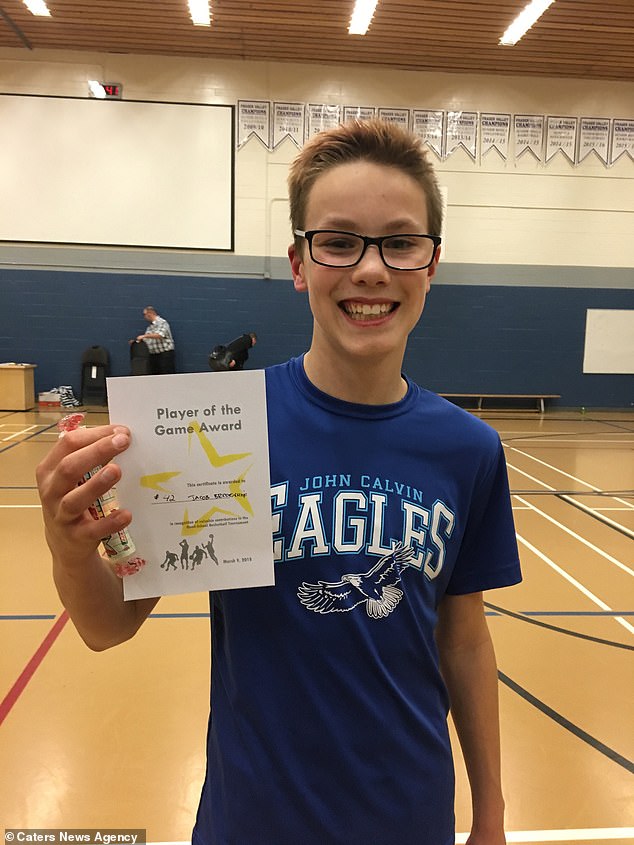 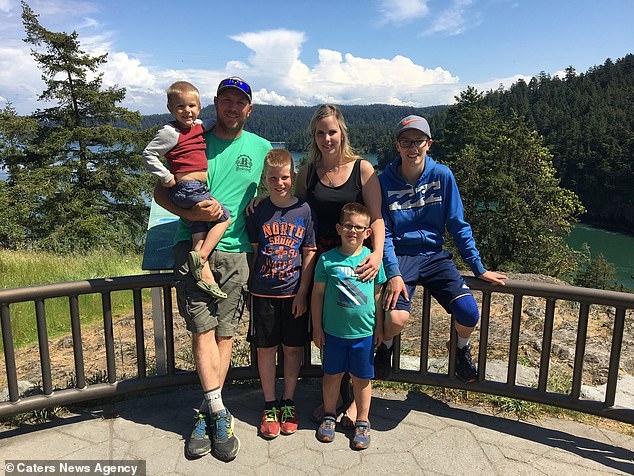 Jacob, pictured with his family, has had to deal with staring and judgement. But his mother said he never shows any sign of self-pity

The family hope to normalise rotationplasty, after initially struggling to deal with the stares and comments of strangers.

Ms Bredenhof said: ‘The beauty of rotationplasty is that there are no limitations for what he could do after.

‘The amazing part is that they preserve the good part of your legs and ankle, which become your new knee and is naturally functional.

‘I have no doubt that he will play basketball and other sports again, his drive matches his character and he has never shown any signs of self-pity.

‘We try very hard to find humour in it, in spite of it all, Jacob remains incredibly confident and isn’t trying to hide it away.

‘One Halloween he was even asked, “How did you get such a real looking prop?” we told them that it wasn’t, and they seemed pretty embarrassed.’

Osteocarcoma is the most common type of bone cancer, usually diagnosed in teenagers and young adults.

It occurs when the cells that grow new bone form a cancerous tumor.

The cause of the cancer is unknown but it is thought to be related to rapid bone growth, such as adolescence.

If the cancer has not spread, the long-term survival rate is between 70 and 75 percent.

If osteosarcoma has already spread, such as to the lungs or other bones at diagnosis, the long-term survival rate is about 30 percent.

There are a few treatment options for osteosarcoma.

Often administered before surgery, chemotherapy uses drugs that help shrink and kill cancerous cells. The length of treatment varies and may depend on whether the cancer has spread to other parts of the body.

In most cases, surgeons can save the cancerous limb. The tumor and surrounding bone are removed and the missing bone is replaced with an artificial one.

A rotationplasty is where the bottom of the femur, the knee, and the upper tibia are surgically removed. The lower leg is then rotated 180 degrees and attached to the femur.