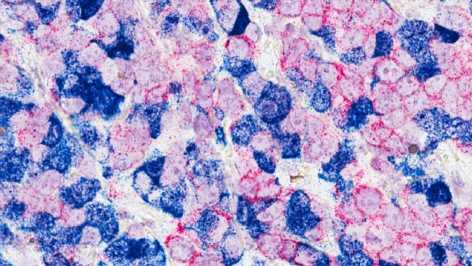 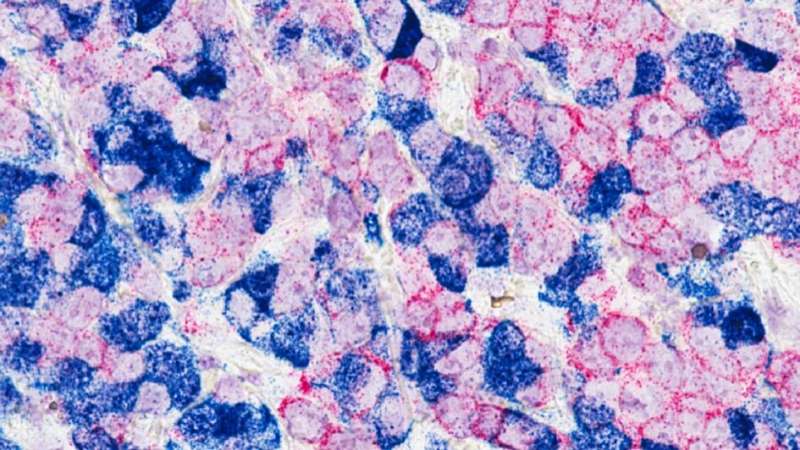 Removing a single protein from cells that surround tumors can improve the sensitivity of certain cancers to immunotherapy, researchers have found.

Scientists from The Institute of Cancer Research, London, in collaboration with AstraZeneca removed, in mice, a receptor protein called Endo180 found on cancer-associated fibroblasts, cells that can help breast cancer to grow and spread, which boosted treatment response. Analyzing patient data, they found that targeting this protein in cancer patients could improve the effectiveness of immunotherapy in breast cancer.

Rather than being made solely of tumor cells, cancers contain a complex ecosystem of various cell types they draw on to help them survive. Investigating this tumor microenvironment opens the door to new treatment possibilities, and means scientists could target more than just cancer cells to treat the disease.

This ties into the ICR’s new strategy, which plans to unravel and disrupt cancer ecosystems by directing research against the cells, signals and immune responses in the tissue environment that nurtures tumors.

Immune cells are one example of non-cancerous cells found in the tumor microenvironment. Immunotherapy aims to harness them, boosting the body’s own immune system to destroy tumors. A relatively new treatment, it can lead to a strong, long-lasting response in patients.

Unfortunately, not all patients respond well to immunotherapy—including those with breast cancer, and attention has turned to ways to change this. The study, published in Cancer Research, shows that targeting another non-tumor feature of the microenvironment could enhance the response of immunotherapy in patients who were previously insensitive to it.

The research focuses on cancer-associated fibroblasts (CAFs)—structural cells which, when recruited by cancers, support tumor growth. Patients with CAF-dense tumors, which is often the case with breast cancer, rarely respond well to immunotherapy, and the researchers interrogated why this may be the case.

The team, led by Professor Clare Isacke, Professor of Molecular Cell Biology in the Breast Cancer Now Toby Robins Research Center at the ICR, modeled the disease in two different groups of mice—those with and without high numbers of cancer-associated fibroblasts in their tumors—and compared them in parallel.

This innovative method found that CAFs prevent a type of cancer-killing immune cell called CD8+ T cells from entering tumors. A tumor microenvironment without many immune cells within it is described as “immune cold,” and this explains why fibroblast-rich cancers rarely find success with immunotherapy—because there aren’t enough immune cells within the tumor to trigger a response.

The researchers linked this lack of immune cells with the presence of the Endo180 receptor, which CAFs have a high number of. They found that removing Endo180 from mice reversed the “immune cold” microenvironment, and that mice not only had more CD8+ T cells in their tumors, but they also showed increased sensitivity to immunotherapy.

The team analyzed data from melanoma patients, and they found that MRC2, the human equivalent of the Endo180 gene, is more abundant in those who were insensitive to immunotherapy. This suggests that MRC2 may have a significant role to play in mediating response to immunotherapy in humans, so reducing its expression could potentially improve outcomes for patients.

Immunotherapy has the ‘potential for cure’

Professor Clare Isacke, professor of molecular cell biology at the ICR, said, “Immunotherapy is going to be here for a long time. It doesn’t work for everyone, but it actually has the potential for cure, which is not a word that we tend to say very much in cancer. Our aim is to make it a viable option for more patients.

“Lots of people are saying cancer-associated fibroblasts are bad when it comes to immunotherapy, but this is one of the first experiments, using knockout mice, that’s tried to do something about it.”

Dr. Liam Jenkins, recipient of the BBSRC iCASE Ph.D. studentship at the ICR, and first author of the study, said, “There’s already a lot of interest in using antibodies to target proteins and enhance treatment response, but these generally focus on cancer cells. Instead, we’re taking a novel approach by targeting other cells in the tumor microenvironment.

“These findings, in mice, are promising and offer more proof that cancer associated fibroblasts contribute to insensitivity to immunotherapy, and if you can modulate these by targeting Endo180, or its equivalent in humans, you can improve immunotherapy response. When immunotherapy works, it’s normally a durable response, which is the beauty of it.”