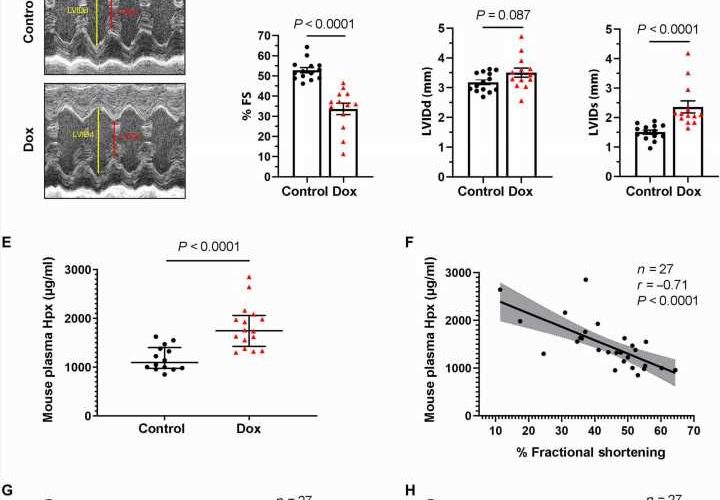 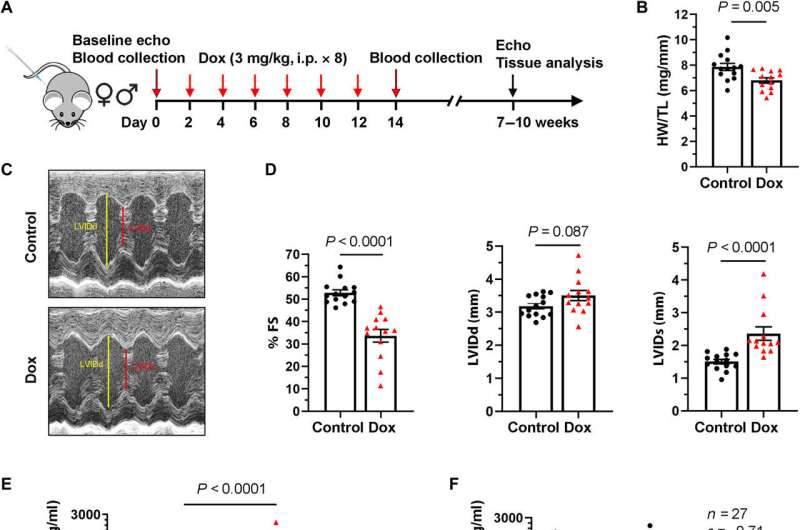 Anthracyclines are a class of chemotherapies effective in treating many forms of cancer, including leukemias, lymphomas and breast cancer. Anthracyclines—such as doxorubicin, frequently used against breast cancer—kill cancer cells by damaging their DNA. However, these effective chemotherapies also cause toxic effects in the heart in about ten percent of patients that can eventually lead to heart failure, particularly in older patients with pre-existing cardiovascular disease.

Currently, physicians lack robust strategies to predict which patients are at risk for this anthracycline-associated heart damage—called cardiac toxicity, a decline in heart function that can lead to heart failure—or to detect it in its earliest stages.

Now, a team led by researchers at Beth Israel Deaconess Medical Center (BIDMC) has identified a protein linked with the onset of anthracycline-associated cardiac toxicity. In two studies conducted in women undergoing treatment for breast cancer, levels of a protein known as hemopexin circulating in the blood were associated with increased cardiac toxicity. Follow up studies in mice revealed the protein has heart-protective properties.

These findings, published in Science Advances, suggest the body produces the protein as a protective measure against the therapy-induced cardiac toxicity. If so, clinicians might one day use the protein to monitor patients undergoing anthracycline cancer treatment for signs of abnormal heart function with a simple blood test.

“Given the increasing burden of both heart failure and cancer in the aging population, the development of new biomarkers and heart-protective strategies is essential to minimizing the impact of cancer therapy-associated cardiac toxicity,” said senior and corresponding author Aarti Asnani, MD, a cardiologist and director of the Cardio-Oncology Program at BIDMC. “This study identifies the induction of circulating hemopexin as a heart-protective mechanism relevant to patients treated with anthracyclines.”

Asnani and colleagues studied 30 women diagnosed with breast cancer and scheduled to undergo treatment with anthracycline chemotherapies. Participants had bloodwork and other data collected at baseline before receiving the doxorubicin regimen. Questionnaires, blood samples and echocardiograms were obtained every three months during the study period.

At three months after initiating cancer treatment, the scientists saw an overall decline in heart function across the cohort of participants, with six patients developing symptoms of heart failure within a year. During this time, the researchers monitored 1,317 proteins circulating in participants’ blood plasma. The team observed changes in a total of 39 proteins, with increases in hemopexin being most strongly associated with early heart toxicity. A second study with a cohort of 31 women yielded nearly identical results.

“Based on these human findings, we used a mouse model that closely mirrored the heart issues observed in patients treated with doxorubicin,” said first author Jing Liu, MD, Ph.D., a post-doctoral researcher in the Division of Cardiovascular Medicine at BIDMC. “As we saw in patients, plasma hemopexin was elevated in mice within 24 hours after completion of chemotherapy and was strongly associated with subsequent cardiac function.”

However, when they performed a similar experiment in genetically altered mice that lack the naturally occurring hemopexin protein, the hemopexin-deficient mice demonstrated increased doxorubicin cardiac toxicity compared to wild type mice. The findings suggest the body may produce hemopexin as a protective response to anthracycline-induced cardiac damage.

“These findings serve as the basis for future investigations to develop hemopexin as both a biomarker and a protective therapy for patients at risk of chemotherapy-related heart toxicity,” said Asnani, who is also an associate member of the Cancer Research Institute at BIDMC. “We are now working to investigate whether our findings apply to a larger group of patients of different genders and other types of cancer, such as lymphoma.”