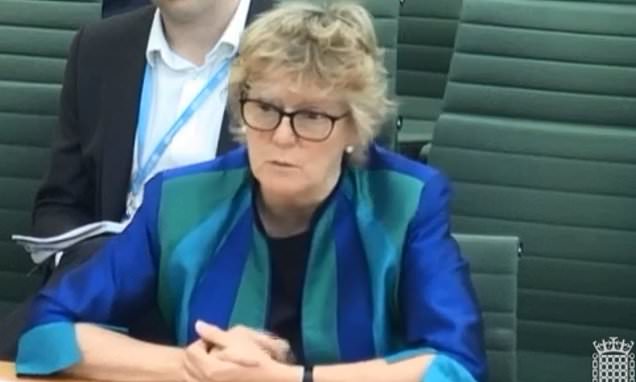 NHS staff who don’t get the flu vaccine ‘could wear a LABEL’ because patients have the right to know and ask why, says England’s Chief Medical Officer

Doctors and nurses could be made to wear labels warning patients if they haven’t had the flu vaccine, England’s Chief Medical Officer has suggested.

Dame Sally Davies, speaking to a Parliamentary committee today, said health workers ‘owe it’ to patients to get vaccinated every winter.

She said it would be difficult to force staff to have the jabs but added that, in future, it could be written into the job contracts of people working in NHS hospitals.

In the same meeting Dame Sally, who is the Government’s chief adviser on health and medical policy, said she would ban e-cigarettes from public places.

Taking aim at vaping, the safety of which she was sceptical about, the CMO said she ‘hates it’ when people waft vapour in her face and said e-cigarettes set a bad example to children. 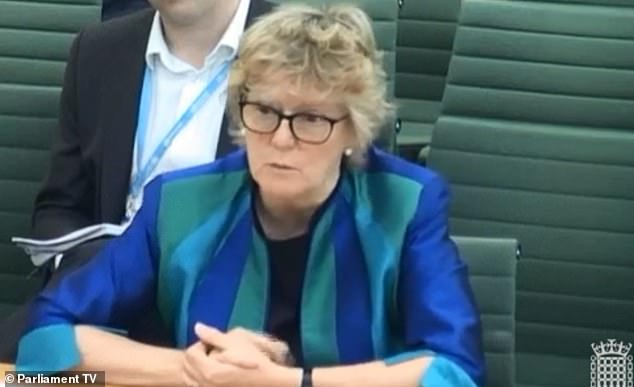 Dame Sally Davies, the Government’s Chief Medical Officer for England, said NHS patients have a right to know whether their nurse or healthcare worker has had the flu vaccine

The flu vaccine is offered for free to all children, elderly people, pregnant women and those with long-term medical conditions – as well as NHS employees.

But uptake among frontline healthcare workers is contentious. In last year’s flu season 70.3 per cent of NHS staff had the jab, according to Public Health England.

Although this is double the figure in 2010 (34.7 per cent), there may still be tens of thousands of unvaccinated health workers.

Dame Sally said: ‘I feel very strongly that we have a duty of care. I go and get vaccinated because I go out to the front line.’

When asked whether staff should have a choice about having the flu vaccine or not, she said: ‘The patients don’t have a choice. They’re in the hospital, we’re looking after them. We owe it to them.’

Dame Sally acknowledged vaccination levels were rising among NHS staff but were variable between hospitals.

HOW MANY PEOPLE DIE OR NEED INTENSIVE CARE BECAUSE OF FLU IN THE UK?

And she said it would be too difficult to suddenly start forcing employees to get them every year.

But in the future it could be mandated by clauses written into new staff’s contracts before they started a new job with the health service.

And if staff choose not to get the jab, Dame Sally said, their patients have a right to know and to question the choice which is potentially putting their health at risk.

‘There was a quite nice study from a hospital in the States where they said “alright, if you won’t be vaccinated you’ve got to wear a mask”,’ she said.

‘We all know masks don’t protect the patient for longer than about three minutes if they’re a paper mask but it actually shows you.

‘I think you could have a label – “I haven’t been vaccinated” – and the patients could ask. I do not understand it.’

She referenced a report about 18 NHS patients in 2010 who caught flu from a health worker in their hospital and died of it.

But the CMO said she didn’t believe staff not getting the vaccine were against vaccination, but thought getting the jab was too inconvenient.

She added: ‘A lot of them say “I don’t want to go and get vaccinated, this patient needs me”.

‘I would not have them smoked in public places’: Dame Sally ‘hates’ e-cigarettes, warning they add to air pollution and may one day turn out to be harmful like tobacco

In the same meeting this morning Dame Sally said she would ban the use of e-cigarettes in public if she could.

The CMO said she was concerned about potential health damage the gadgets may be linked to in future, but acknowledge they were ‘clearly much safer than tobacco smoking’.

But she added: ‘My personal view is we should treat them like we do tobacco products as well as having them there for cessation.

‘So I would not have them smoked in public places. I hate it when I walk past someone and they waft vapour over me, and I think here we are talking about pollution – we want people to live in clean air – why do we let them smoke in public places and waft it all over us?’

Dame Sally said she accepted e-cigarettes had become a ‘liked’ stop-smoking aid and said it was positive that they help people kick the habit.

But long-term studies haven’t been done and their health impacts – particularly of the chemicals used to flavour the vapour – were a concern to her.

The high-profile advertising of e-cigarettes and heated tobacco was ‘offensive’, Dame Sally said, and she was concerned about their appeal to children.

‘I just don’t want us to set an example to children of them being smoked or used publicly,’ she said.

‘I don’t want that pollution and I don’t want it put over as a cool lifestyle, because it’s an addictive product.

‘Why introduce and have available a new addictive product? We’ve got enough.’