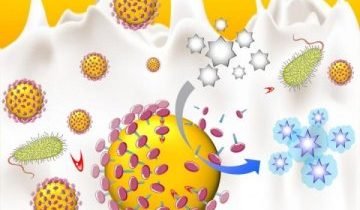 Researchers at Queen’s University Belfast have developed a highly innovative new enzyme biomarker test that has the potential to indicate diseases and bacterial contamination saving time, money and possibly lives.

The test, developed by scientists at the Institute for Global Food Security at Queen’s, can detect enzyme markers of disease known as proteases in humans, animals and food products.

Proteases are crucial for microorganism growth and are responsible for the progression of many diseases.

Levels of proteases can be highly elevated in the urine of patients with diabetic kidney disease, or at the sites of infected wounds. Similarly, in cows, an elevation of proteases in their milk can reveal diseases such as bovine mastitis, a type of mammary gland infection. In food, proteases produced by bacteria contaminated in meat and dairy products can lead to rancidity, as well as decreased shelf life and quality.

Current protease detection methods are costly, time-consuming and are not always effective. Scientists at Queen’s Institute for Global Food Security have developed a nanosensor which has resulted in sensitive, fast and cost effective protease detection in milk and urine.

Dr Claire McVey, Queen’s researcher and co-author on the study published in leading journal Nano Research, explains: “Not only is the test cheap to produce, but it can be used anywhere and is not reliant on laboratory conditions. Eliminating the need to carry out tests in a laboratory setting is life-changing. As well as being cost-effective, it means faster diagnosis.”

The gold-nanoparticle based nanosensor devised by Queen’s researchers indicates when proteases are present through a visible colour-change reaction. Gold nanoparticles are well known for their capability in speeding up the oxidization of a chemical called tetramethylbenzidine (TMB), visible through a vivid blue-colour formation.

When casein (a molecule present in milk) is added to gold nanoparticles, it surrounds the nanoparticles acting as a protective surface barrier. When TMB is introduced, the casein prevents the oxidization reaction meaning there is no or only a slight colour change.

Where proteases are present, they ‘eat’ the protective casein barrier, exposing the surface of the gold nanoparticles. In this instance, when TMB is added, the proteases have removed the casein meaning oxidization occurs quickly causing a fast change in colour.

Dr Cuong Cao, the lead academic on the study: “When we add TMB to the casein-covered gold nanoparticles, we can tell virtually instantly if proteases are present by whether or not the solution turns blue. Normally such testing takes much longer.”

Using this approach, proteases can be detected within 90 minutes without the need for complicated or expensive laboratory equipment.

In addition, the ‘ingredients’ for making the nanosensor are readily available and low cost. Gold nanoparticles can be produced in abundance, with little restriction on storage requirements, making it a durable and cheap substance.

The approach developed by the Queen’s researchers was tested on milk and urine but it could be adapted for a number of other applications.

Dr Cao explains: “Using molecules other than casein to coat the surface has the potential to detect other types of enzyme biomarkers. For example, coating the nanoparticles with lipids could detect the lipase enzyme, which could help in the diagnosis of diseases such as pancreatitis.

“Following full validation of this test, we would like to explore how we could expand the application to detect a host of other diseases or contaminated foods. This new approach will enable the identification of enzyme biomarkers at the point of care. It could change the landscape of how enzyme biomarkers are detected and diagnosed, making an impact not only on food safety, but on the diagnosis of enzyme-related illnesses among animals and humans. The potential scope for this test is huge.”

Professor Elliott, founder of the Institute for Global Food security and a co-investigator in the study commented: “The ability to diagnose disease or contamination quickly can have a huge impact on how serious problems can be dealt with. The ultra-low cost of the system will help reduce costs of testing and could transform the amount of testing performed in the developing world.”