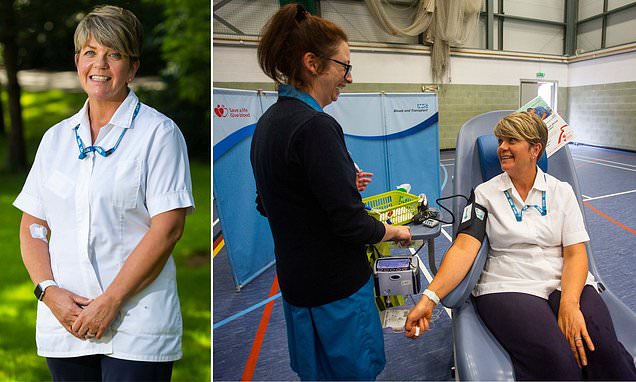 A mother with a very rare blood type is thought to have saved dozens of lives after becoming Britain’s only donor of her type.

Sue Olds, 52, from Penzance, Cornwall, gives blood every 16 weeks, with 46 samples being taken to date.

Ms Old’s blood type is caused by a genetic mutation that eliminates C, c, E and e on her RBCs. Her blood can be given to anyone with Rh C, c, E or e blood.

Due to blood type -D-‘s rarity, it is difficult to estimate how many other Britons have it. If a patient was found to have this blood type and needed a transfusion, Ms Olds would be their only donor, the NHSBT warned.

The body claims Ms Olds’ donations have ‘saved or improved’ the lives of dozens of people, including cancer patients, trauma victims and premature babies.

And if she continues donating for the rest of her life, as she plans to, she could save up to 100 people, NHSBT says. 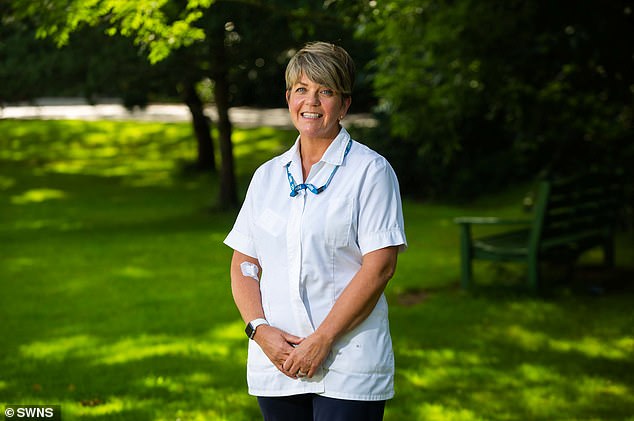 Sue Olds is the only donor on the NHS Blood and Transplant register with blood type -D-. This comes about due to a genetic mutation that eliminates four proteins on a person’s red blood cells. However, people who have these proteins can still receive type -D- blood

Ms Olds, a mother-of-one, first gave blood in 1994, but did not discover how rare her donations are until a decade later.

‘I had a phone call back in 2004 to say I had a rare type of blood but other than that not a lot of information came forward,’ she said.

‘Then earlier this year the NHS called me and told me the facts and figures, it’s a bit overwhelming.’

In 2017, two units of Ms Olds’ blood were given to a baby over two consecutive days. Medics believe the infant may not have survived without her donations.

‘Some of my blood has gone on to save a baby’s life,’ she said. ‘It’s overwhelming, it’s very emotional,’ she said.

‘Life is very precious, I think whether it’s saving a baby’s life of a pensioner’s, it makes no difference.’

Mrs Olds told The Daily Mirror: ‘As soon as I finish one appointment I’ll be on the phone booking my next. It’s really nothing – just one hour of your day every four months.

‘I know that it will be of benefit to people who have been in road traffic accidents or those who are giving birth, for example. It is something that I would encourage everyone to do.’

An NHS Blood and Transplant spokesman said: ‘What is crucial here is that for some patients Sue would have been their only possible donor.

‘No other blood that we have in stock could have been used. For those patients with the same type, Sue is our sole current donor who can help them.

‘No one else’s blood could be given to some recipients in need without the risk of inducing a potentially fatal transfusion reaction.’ 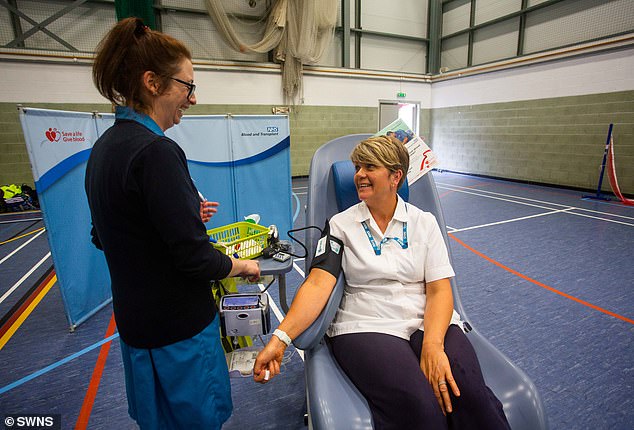 Ms Olds gives blood every 16 weeks. Having donated 46 times to date, she vows to continue for the rest of her life, which could ‘save or improve around 100 lives’. She is pictured undergoing the ‘virtually painless’ procedure at the Penzance Leisure Centre in Cornwall

Samples of Ms Olds’ blood are even stored at the National Frozen Blood Bank in Liverpool for future use, according to the NHSBT website.

The spokesperson claims her blood has ‘saved or improved’ the lives of dozens of people.

And if she ‘keeps donating three times a year for life, that’s around 100 lives saved or improved’.

Since discovering how valuable her blood is, Ms Olds has vowed to donate for as long as she can.

WHO CAN GIVE BLOOD IN THE UK?

Most people can give blood.

Donors have to be:

Men can donate every 12 weeks and women every 16 weeks.

Males can give more frequently due to them generally weighing more, which correlates to them having more iron.

This is an essential mineral that helps to give a person strength and energy.

A person may be unable to give blood if they:

‘Ladies can donate every 16 weeks,’ she said.

‘I’ve traveled a bit and you can’t donate after visiting certain countries, but now I’m back in Cornwall and back on track.

‘As soon as I’ve finished I’ll be on the telephone booking my next appointment. It’s just one hour of your day every four months, it’s nothing.’

She told The Mirror: ‘I know it will be of benefit to people who have been in road traffic accidents or those who are giving birth, for example.’

‘Given only 110 known donors in the world have it, and only 30 people outside of Japan, you’d probably be talking a handful, but we don’t know,’ the NHSBT spokesperson said.

Miss Olds, a support worker, is speaking out to encourage others to give blood.

‘It’s a virtually painless procedure, and over the years I’ve got to know the team that come down to Penzance,’ she said.

‘They are a friendly bunch, I give blood and have a bit of a natter and a catch up with them.

‘It’s such a small thing you can do but it’s massive for the family of the person you save.’

‘This can be particularly important in the case of very rare blood types – some types are almost only found in people from certain ethnic backgrounds.

‘Our very rare donors like Sue are invaluable and we’re so grateful that she donates.

‘If someone with a very rare blood type falls ill, there may be only a handful of donors in the whole country who can help them, or even just one.

Related posts:
08/08/2019 Health News Comments Off on Mother has the ‘rarest blood in Britain’
Categories
Recent Posts
We and our partners use cookies on this site to improve our service, perform analytics, personalize advertising, measure advertising performance, and remember website preferences.Ok