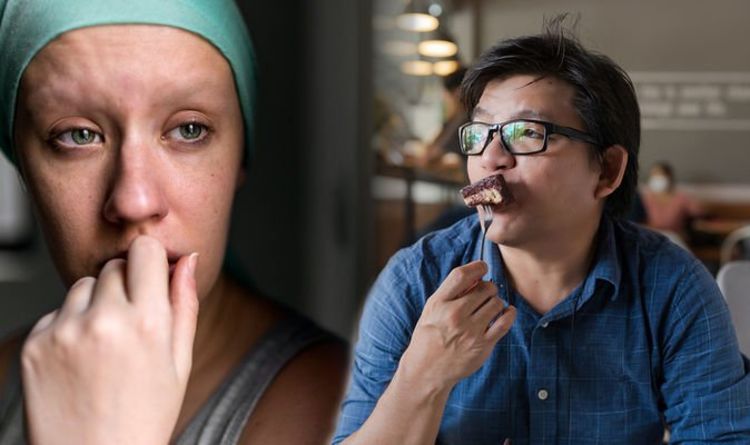 A new study has found that when palmitic acid was supplemented into the diet of mice, mouth and skin cancers were more likely to spread. Palmitic acid, or palm oil has remained a controversial substance however this latest study shines a light on how it could be one of the main causes for the increase in cancer diagnosis seen of late.

A new study published in the journal Nature has made a shocking discovery linking dietary fat and the spread of cancer.

This in turn significantly increases the likelihood this cancer will spread.

The discovery has left researchers scrambling for a new therapy to help interrupt this process in the hopes it could stop the spread of cancer in a time where diagnoses have increased at alarming rates.

READ MORE: Statins side effects: Five telltale signs in your urine – when to alert your doctor

Metastasis – or the spread – of cancer remains the main cause of death in cancer patients and the vast majority of people with metastatic cancer can only be treated, but not cured.

As most are aware, food can have a major impact on cancer with fatty acids being the building blocks of fat in the body.

Unfortunately, metastasis is often promoted by fatty acids in one’s diet further warning what you put in your mouth can have a devastating health impact.

“There is something very special about palmitic acid that makes it an extremely potent promoter of metastasis,” said Prof Salvador Aznar-Benitah, of the Institute for Research in Biomedicine (IRB), Barcelona.

“I think it is too early to determine which type of diet could be consumed by patients with metastatic cancer that would slow down the metastatic process.”

The study suggested that exposure to palmitic acid caused changes to the function of genes in cancer cells that allowed them to sense fatty acids and consume them more efficiently.

The presence of palmitic acid also appeared to send cancer cells into a “regenerative state” allowing them to form signalling networks beyond the tumour, which is known to be a crucial step towards spreading.

Palm oil is used in the production of foods such as cake, chocolate, biscuits, margarine and frying fats.

It is also found in cosmetics, soap, shampoo, cleaning products and can be used as a biofuel.

Shockingly, up to 50 percent of products in an average UK supermarket now contain palm oil.

Prof Greg Hannon, director of the Cancer Research UK Cambridge Institute, said: “This is a rigorous and comprehensive study that suggests that exposure to a major constituent of palm oil durably changes the behaviour of cancer cells, making them more prone to progress from local to potentially lethal metastatic disease.

“Given the prevalence of palm oil as an ingredient in processed foods, this study provides strong motivation for further study on how dietary choices influence the risk of tumour progression.”

Helen Rippon, chief executive at Worldwide Cancer Research, added: “This discovery is a huge breakthrough in our understanding of how diet and cancer are linked and, perhaps more importantly, how we can use this knowledge to start new cures for cancer.

Metastasis is estimated to be responsible for 90 percent of all cancer deaths – that’s around nine million deaths a year globally.

“Learning more about what makes cancer spread and – importantly – how to stop it is the way forward to reduce these numbers.”
Source: Read Full Article