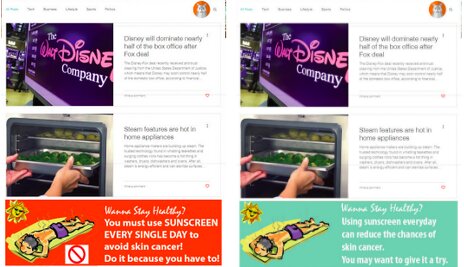 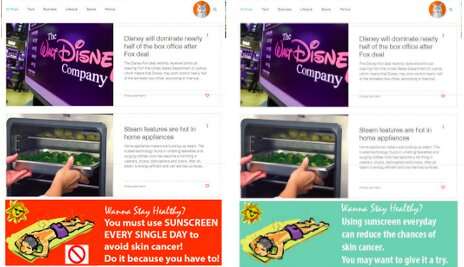 Tweaking the look of a social media profile may subtly alter a person’s reaction to the health messages that appear on that site, according to researchers. They add that these reactions could influence whether the users heed the advice of those messages.

In a study, the researchers found that people who gained a feeling of control when they customized an online website were more likely to perceive the health message as a threat to their freedom, lowering the chance that they will adopt the message’s advice. On the other hand, when customization bolstered the users’ sense of identity, they did not resent the message as much and were more willing to consider the ads’ recommended behavioral changes, according to the researchers.

“In a customized environment with strong identity ties—such as a social media site like Facebook—we might not mind the persuasive attempts of a health advertisement, but in an environment that offers control without much personal identity—for example a news website—we seem to take these types of messages as a threat to our freedom of action and react negatively against them,” said S. Shyam Sundar, James P. Jimirro Professor of Media Effects in the Donald P. Bellisario College of Communications and co-director of the Media Effects Research Laboratory.

According to the researchers, who report their findings in the journal Health Communication, people often customize their online media spaces by adding photos and artwork, along with uploading avatars and icons. These seemingly small acts of decoration and creativity may enhance the users’ feelings of ownership of these spaces, said Jinping Wang, assistant professor of media studies, Duquesne University, who served as the paper’s first author.

“Users have a lot of opportunities to customize their sites and portals—such as adding pictures, or choosing the news sources for their feeds—and it seems that when people customize these interfaces, they are turning it into almost their own sacred place, or their own personal territory,” said Wang.

Advertisers and health professionals currently use these spaces to pass on health-related advertisements and public service announcements, or PSAs, said Sundar, who is also an affiliate of Penn State’s Institute for Computational and Data Sciences (ICDS). He said that when these ads appear in online spaces over which they feel a sense of control, they are more likely to trigger a threat to their freedom, which could then lead to anger at and even defiance against those messages.

The researchers suggest that health communicators may want to carefully consider the placement of their online messages to avoid triggering those reactions of a loss of control or freedom.

“Our data suggest that placing a health PSA in customized spaces where users are secure in their identity can help reduce their negative reactions,” said Sundar.

Developers may also want to consider features that boost users’ sense of control, according to Wang.

“Giving users options, such as ‘skip this message’ or ‘close this app,’ would be helpful to potentially preserve their sense of control. That might also make them less reactive to the content,” said Wang.

The researchers recruited 145 participants on a web-based crowdsourcing platform for the experiment. The participants were invited to test a news website and randomly assigned to one of two conditions. In one condition, the participants could add a background picture and an avatar, as well as select news topics. The other group was unable to make those customizations.

The participants were then asked questions about their reactions to the message, their attitude toward using sunscreen every day and their behavioral intentions to follow the suggestion.