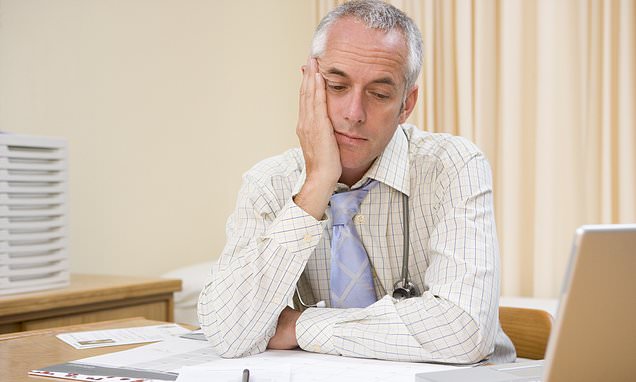 GPs are seeing THREE TIMES as many patients as is deemed safe: One in ten treat 60 people every day and some have to see 100, reveals survey

GPs are dealing with more than 100 patients a day – three times the safe limit, a survey reveals today.

The average family doctor has 41 patient ‘contacts’ in a typical day, including consultations and phone calls.

The survey by Pulse magazine found the safe number of patients was 30. Above this and they risked making serious mistakes. 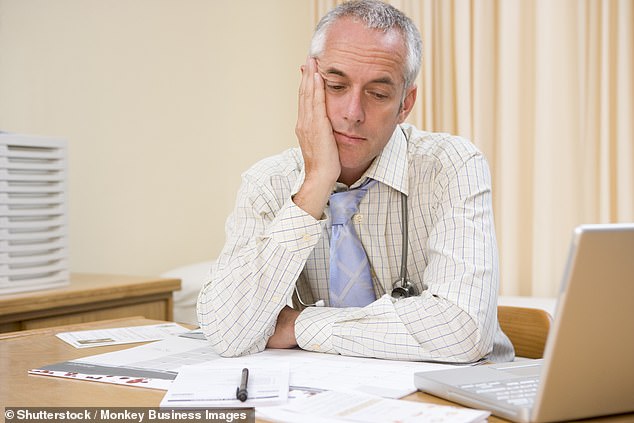 Meanwhile, research by the Nuffield Trust reveals the NHS is facing its first sustained fall in GP numbers in 50 years.

According to the think-tank’s analysis this is the first sustained drop, happening over several years, since the late 1960s.

GPs are retiring or quitting and they are not being replaced by younger trainees, because the career path is unattractive.

Professor Helen Stokes-Lampard, chair of the Royal College of GPs, who practises in Lichfield, Staffordshire said: ‘In my own practice recently, I had a 12-hour day and 100 patient contacts.

HOW MANY PEOPLE HAVE TO WAIT TWO WEEKS TO SEE THEIR GP?

The number of people waiting more than two weeks to see their GP in England has shot up by more than 1.5million this year, official data showed earlier this week.

Between January and March, 12.3million appointments were made 15 days or more after patients had booked to see their doctor.

This is a 14 per cent rise from the 10.8million during the same period last year, and represents one in six patients overall.

Experts said the figures show how GPs’ workloads are expanding as the number of appointments continues to grow but the number of doctors falls.

Waiting times vary across the country. The worst performing area kept almost one in three patients waiting a fortnight and the best fewer than one in 10.

The figures released by NHS Digital suggested a shortage of GPs is continuing to take its toll on patients.

Although the vast majority of appointments are booked and completed on the same day – 10million in March – the number of long waits has risen.

Many appointments with long waits are routine follow-ups or non-urgent visits, but experts said the figures are still a sign of doctors’ increasing workload.

‘GPs across the UK will tell similar stories.’

GPs were asked by Pulse how many patient contacts they had on a typical day, 11th February this year.

Dr Jonathan Harte, a GP in Nottingham who took part in the survey, said: ‘By lunchtime, I felt on the edge and risked missing urgent tasks and contacts, thus affecting patient safety.

‘I did miss the fact that a patient I had tried to contact earlier in the day had called back, so I didn’t call her back before the surgery closed.’

Dr James Howarth, a GP in Spilsby, Lincolnshire, said: ‘I was duty doctor on the day of Pulse’s survey, and I had 124 patient contacts.

‘The median is about 60 to 70 – beyond a safe level. This workload creates patient safety risks.

‘We might forget consultant details, plans and actions, or prescribe for the wrong person, use the wrong labels on blood tests, and so on.

‘I have raised safety concerns with governing bodies before. I was basically told to shut up or my practice would be run over with a fine-toothed comb.’

She said: ‘You could miss a result or misread a letter, or you don’t focus on the right symptom or ask the right question.’

The Government initially promised to hire an extra 5,000 GPs by 2020 but since that pledge in 2015 they have admitted the goal is unachievable.

An NHS England spokesman said: ‘We already know that general practice is under pressure which is why investment in local doctors and community services is increasing by £4.5 billion, helping fund an army of 20,000 more staff to support GP practices as part of the NHS Long Term Plan.

‘But we are also aware that almost nine out of ten salaried GPs currently work part-time.’

More than 2.5 million patients across England could see their GP surgeries close in the next five years, experts said earlier this year.

The Royal College of General Practitioners said 762 practices in the UK are at risk of closing within the next five years because at least three quarters of their doctors are aged 55 or over and approaching retirement.

Experts said so many closures would have a ‘catastrophic’ effect on the health service.

Appointment waiting times could get even longer, workloads would grow and more people could end up queueing at A&E for minor illnesses.

Campaigners warned the potential closures would be ‘dangerous’ for patients and are calling for ‘drastic action’ to encourage new GPs to join the profession.

The situation is worst in Southend in Essex, where 13 of the area’s 35 GP practices are at risk of closing, potentially affecting nearly 39,000 patients.

A third of surgeries in the London borough of Havering could shut down, and more than 85,000 patients could lose their GP in Sandwell and West Birmingham.

Only around a quarter of areas of England have no practices at risk of closure, according to the RCGP’s estimates.

Related posts:
08/05/2019 Health News Comments Off on GPs are seeing TWICE as many patients as is safe
Categories
Recent Posts