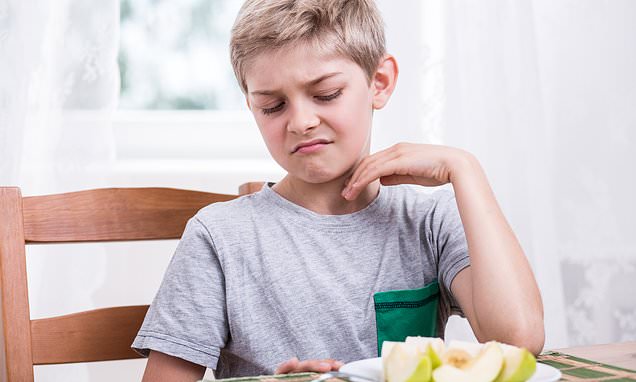 Fussy-eating toddlers grow up to consume more chocolate, sweets and cookies in their teenage years than their peers

Children who are fussy eaters as toddlers are more likely to grow up eating junk food, research has revealed.

A study found youngsters who were picky about their food when they were three years old went on to consume more chocolate, sweets, and cookies by their teenage years.

At age 10, fussy eaters were consuming 24 per cent more sweets and chocolate than their non-picky counterparts. By 13, they were still eating 11 per cent more sugar. 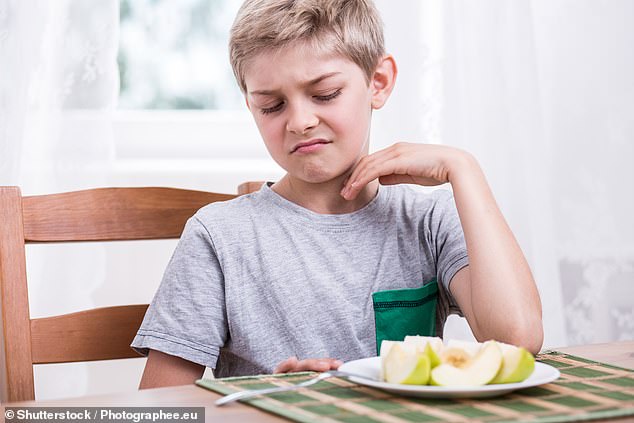 Children who are fussy eaters as toddlers grow up eating junk food, according to a new study by University of Bristol researchers (file photo)

Fussy eating in toddlers is a well-documented phase when children refuse to eat many types of food or try new types of food.

The research said 16 per cent of three-year-olds show signs of fussy eating, some as a cry for help because of emotional problems or phobias, while others may simply be waging a battle of wills with parents.

Some may actually be copying the example of parents who do not eat healthily themselves.

University of Bristol researchers examined food questionnaires and records of children born in the 1990s.

They analysed whether people who identified as picky eaters at three years old had differences in their diet by the time they were aged 10 and again at 13 compared to non-fussy eaters.

WHAT ARE THE DANGERS OF FUSSY EATING?

A third of under-fives are feared to be suffering from mild to moderate problems which lead them to refuse foods essential for health and development, according to the Royal College of Psychiatrists.

Sixteen per cent of three-year-olds suffer restrictive eating, meaning they refuse to eat many types of food.

Some children may refuse food as a cry for help due to emotional problems or phobias while others may simply be waging a battle of wills with parents.

Some may actually be copying the example of parents who do not eat healthily themselves.

If a child’s problem is short-term, it is unlikely to do any harm.

Lack of calcium – found in milk and leafy green vegetables – can lay the foundations for weak bones while a deficiency of B vitamins can cause nerve problems.

Lack of vitamin A – found in carrots and other vegetables – can harm eyesight.

The most serious problems are found in anorexic and bulimic children who are effectively starving their bodies.

This can lead to the body trying to conserve energy at a time when it is most needed for growth.

They found that at the age of 10 fussy eaters consumed less fruit, vegetables and meat.

Instead they were consuming 24 per cent more chocolate than their non-fussy counterparts.

But researchers claim that despite their less healthy diets, the fussy eaters were not deficient in essential nutrients.

Dr Caroline Taylor, from the University of Bristol’s centre for academic child health, led the research.

She said: ‘While we found that there were some differences in nutrition at the ages of 10 and 13, they were not large and are unlikely to have adverse effects on general health and development.

‘We know that picky eating is a common behaviour in three-year-olds and is usually resolved by the time children start school.

‘However, very little is known about the diet of picky eaters as they develop into teenagers.

‘There was a low intake of fruit and vegetables in the diets of the majority of children even those who were not picky.’

It is important for children to eat healthy, balanced diets when they’re growing in order for their bodies and brains to develop properly.

Too little vitamin A could damage children’s eyesight, while not enough calcium may leave youngsters with weaker bones.

‘I would like to see more support for parents,’ she said, ‘to help their children widen their food choices at an early age so that this continues through adolescence.

‘There should be strategies developed for use in pre-school years to support parents.

‘As well as the development of tools to help identify children who are likely to become fixed in their picky eating behaviour so that extra support can be given.

‘Thanks to the wealth of information available from the Children of the 90s study over time we’re now able to make these conclusions and recommendations.’

The research, funded by Nestlé, was published in the journal Nutrition.