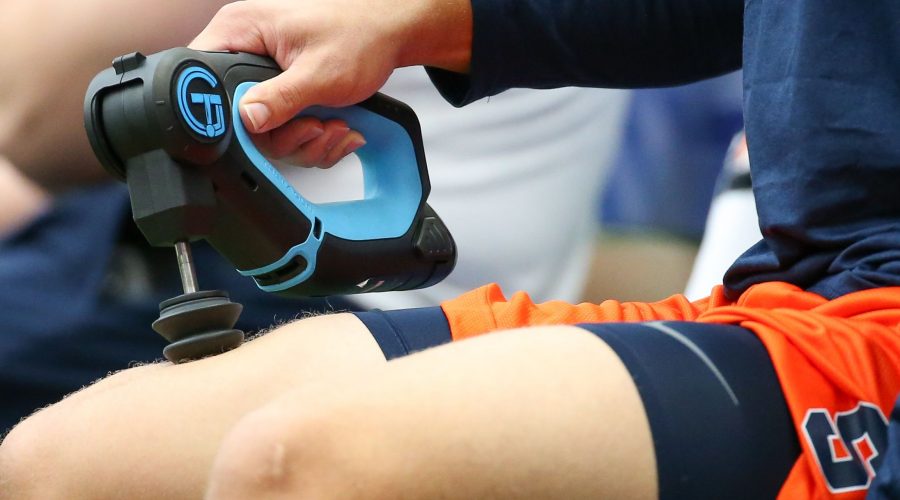 It looks like a power tool, and can sound like one, too. But it just may be your best method of recovering from a tough workout — and warming up, too.

Meet the massage gun, the hot new trend that just may be landing in a gym near you. Over the last three years, more and more people have grown aware of the need to increase blood flow in muscles, whether you’re training or recovering. Various methods have grown popular to do that, with everything from foam rollers to vibration therapies to standard massage landing in gyms.

The massage gun inhabits this same space, and while it’s supported by limited research, the theory behind it is sound, and it has the potential to change the way you warm up and recover. Several pro athletes have been seen using massage guns during games, with NBA star Kyrie Irving the most prominent. In the 2017 NBA Finals, Irving was spotted midway through a critical game lying on his back, a trainer using one to keep him loose.

But athletes aren’t the only ones using this to keep their bodies in top form. Also known as percussive therapy, I’ve been using massage guns on my clients for several years and the results have been strong. If you train hard and are looking for an edge, a way to recover more quickly and get into your workouts more aggressively, this is a device you should consider.

What Exactly Is a Massage Gun?

The massage gun trend is a relatively new one in fitness. You’ve used foam rollers before, and vibrating foam rollers appeared on the market three or four years ago. The theory behind these foam rollers was that the vibrations confused something called the Golgi tendon response, which would help to relax tight muscles.

Then, two years ago, the Theragun took off, kicking off a wave of massage guns. Hyperice’s Hypervolt and several others followed, and earlier this year, Theragun introduced the Theragun G3 Pro (below).

The massage gun generally looks something like a power tool, and once it’s turned on, it whirs like one too (although recent models have quieted that). To use it, you simply aim it at your skin, about an inch away, and let it pulsate back and forth, relaxing muscles and promoting bloodflow in much the same way a vibrating foam roller does. It’s easier to use than a foam roller though, and more natural.

In theory, massage guns also offer a chance to modulate pain. What about pain modulation? Well, the pain you feel typically manifests as a specific frequency. Healthy nerve impulses should react to pain in milliseconds, but at certain frequencies, your pain may not be able to keep up with that. So in theory, a massage gun vibrating at the right frequency may “trick” the nervous system into blocking pain. We call this the “pain gate theory”.

How You Use Your Massage Gun

Part of the beauty of the massage gun is that it’s incredibly easy to use. Just point at a target, press, and let it do its work. But to get the most out of your massage gun you’ll want to keep a few basics in mind.

Before you get started, turn it on, so that the head begins pulsing. Then float it along the desired muscle that you’re trying to loosen or warm up. There’s never a need to press extra-hard with your massage gun; the pulses do their job. When you find a trigger point, a tight, knotty area of muscle that’s a little more painful and sensitive than the rest of the muscle, linger on that area, just as you would with a foam roller.

Move your massage gun slowly along the muscle. There’s no need to rush the process. Enjoy the massage.

Massage guns are primarily thought of as “recovery” tools in today’s fitness culture, but you can use them for either situation. In fact, using them as a warmup tool helps get you off the hook of that dreaded foam rolling ordeal.

In theory, the percussive therapy is doing several things you want in a warmup. First off, it’s heightening bloodflow in your targeted muscles. Secondly, the pulsating is turning on your sympathetic nervous system, the fight-or-flight system that preps your body for activity and sport.

Between sets, you can also take advantage of a massage gun, loosening tense, tight areas so you can get more out of your next set. For example, you may feel your chest tighten slightly after a set of bench press reps and be tempted to stretch. But research tells us that statically stretching a muscle may decrease potential and force output. Instead, use your massage gun for 15 seconds on a muscle area that feels tense. This should increase blood flow and excite the muscle, loosening it again for the rest of your workout.

When you’re done with your workout, your body’s in a heightened state. But a massage gun can, in theory, help you relax your nervous system. The sooner you fire up your parasympathetic nervous system, which helps govern rest and relaxation, the sooner your body shifts into recovery mode.

To use the massage gun to do this, fire it up and spend 90 to 120 seconds moving up and down each muscle group. Again, you’re doing this throughout the muscle belly, not near joints. This will help relax your muscles.

Related posts:
02/04/2019 Health News Comments Off on Everything You Need To Know About Massage Guns
Categories
Recent Posts