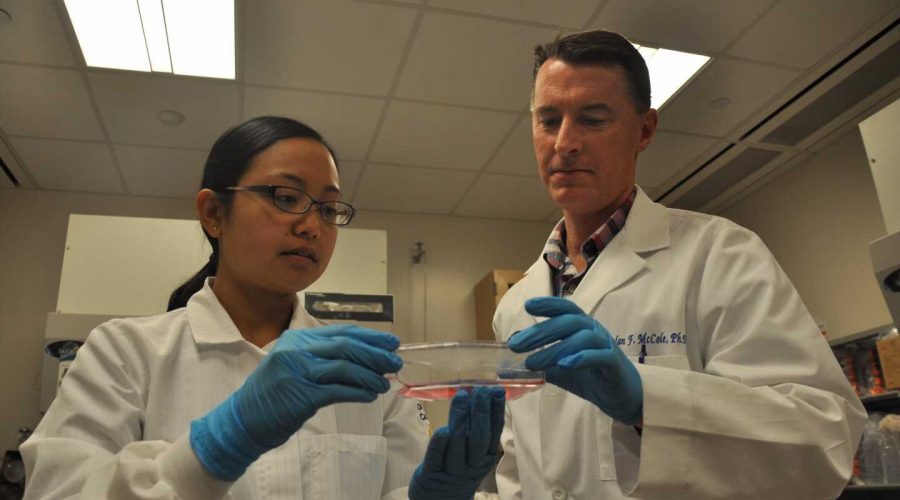 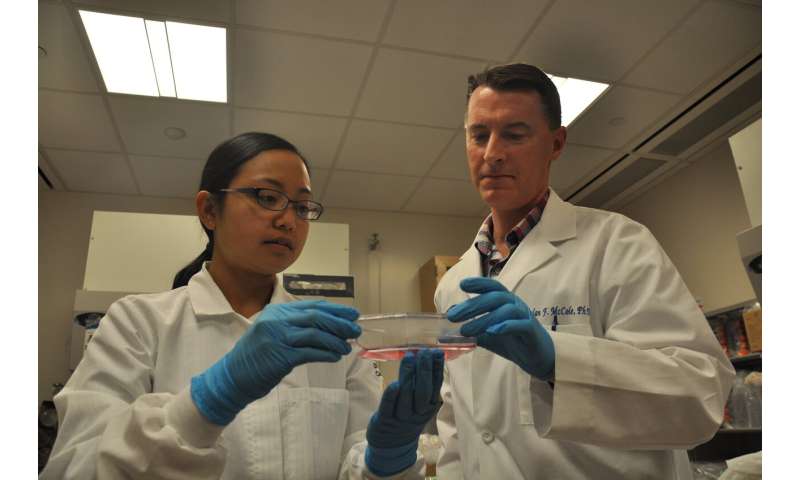 A research team led by biomedical scientists at the University of California, Riverside, has found that a drug approved by the FDA to treat rheumatoid arthritis and ulcerative colitis can repair permeability defects in the gut’s epithelium.

The study is the first to show the drug, tofacitinib, also called Xeljanz, has a direct effect on cells lining the gut by correcting defects that occur in inflammation. Until now, the effects of tofacitinib on intestinal epithelial cell functions were largely unknown.

“Our work increases our understanding of how this drug is useful for treating ulcerative colitis,” said Declan McCole, a professor of biomedical sciences in the UCR School of Medicine, and the lead author of the study that appears in the journal Inflammatory Bowel Diseases. “We now better understand where in the gut the drug is working, and how.”

The epithelium is a thin layer that lines the alimentary canal. The gastrointestinal epithelium is comprised of cells that have gaps between them, making them selectively permeable and providing a barrier that keeps out pathogens, toxins, and antigens from entering the gut, while allowing the absorption of nutrients. In ulcerative colitis, this epithelial permeability becomes leaky, allowing bacterial products to cross into the gut and nutrients and water to leak out. This, in turn, triggers immune responses, resulting in fluid loss and diarrhea.

“We found tofacitinib fixes the leakiness in the intestinal barrier,” McCole said. “Specifically, it fixes intestinal epithelial permeability defects caused by ‘interferon-gamma,’ an inflammatory cytokine involved in autoimmune diseases such as ulcerative colitis and rheumatoid arthritis.”

“By targeting specific molecules, the drug inhibits a pathway that is activated by inflammation,” said Anica Sayoc-Becerra, a graduate student in the Biomedical Sciences Graduate Program, a member of McCole’s lab, and the first author of the research paper. “Our study shows tofacitinib is not just acting on immune cells, as was first thought, but can have a direct effect on the epithelial cells that are the key factor in maintaining gut barrier function.”

A major focus of McCole’s lab is PTPN2, a protein-coding gene associated with autoimmune diseases such as Crohn’s disease, ulcerative colitis, and rheumatoid arthritis. Individuals with mutations in this gene that cause it to lose function have an increased risk of getting these diseases. McCole’s research group was the first to identify PTPN2 normally helps to protect the barrier function of the epithelial cells that line the gut.

“We thought tofacitinib might be a very effective way of correcting the defects that occur from the loss-of-function mutations of PTPN2 without having to introduce new genes into a cell, animal, or patient,” she said.

McCole and Sayoc-Becerra were joined in the study by UC Riverside’s Moorthy Krishnan, Jossue Jimenez, Rebecca Hernandez, Kyle Gibson, and Reyna Preciado; as well as Shujun Fan and Grant Butt of the University of Otago in New Zealand. Sayoc-Becerra expects to graduate with her doctoral degree in December 2019. This is her first paper as first author.