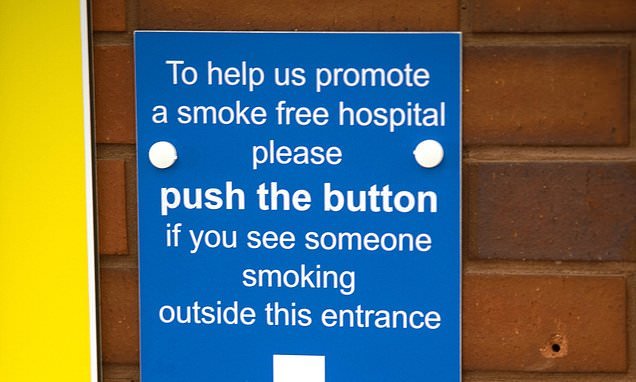 Almost a third of NHS hospitals in England still allow smoking on their premises, according to an official report.

Health chiefs have called for hospitals across the country to stop people from lighting up on their grounds since 2013.

But a survey of NHS hospital trusts by Public Health England has found 31 per cent still allow smokers on their premises.

It remains legal to smoke on hospital grounds in England – despite it being outlawed in Northern Ireland and Scotland, and soon to be Wales. 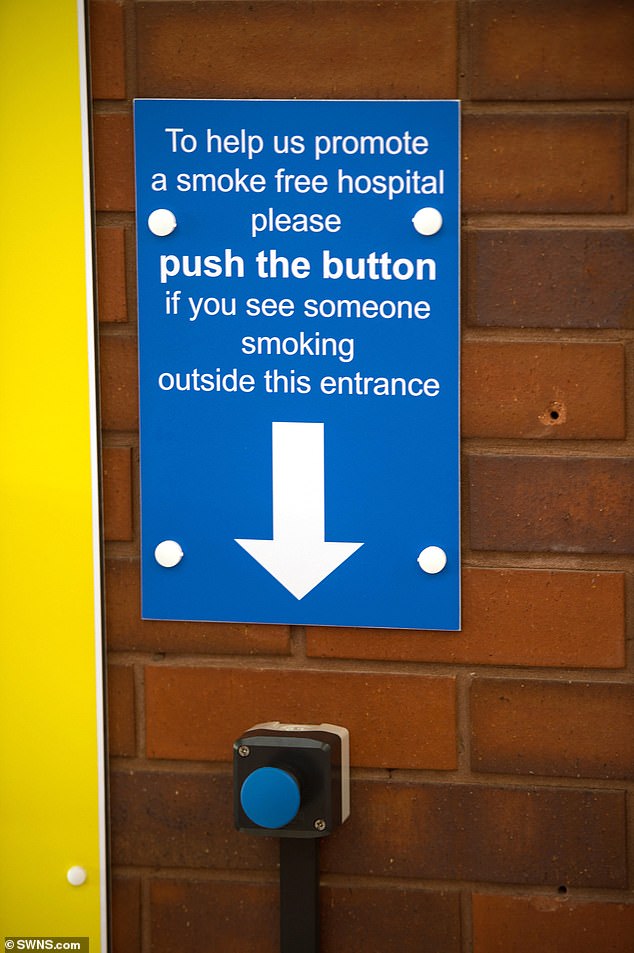 Mid-Yorkshire Hospitals NHS Trust has a tannoy announcement system that plays anti-smoking reminders recorded by children at the press of a button (pictured: the sign at one of the hospitals ran by the trust)

Public health minister, Seema Kennedy, said she is determined’ to see a smoke-free NHS by 2020.

She added: ‘No-one should have to walk past a cloud of smoke in order to enter or leave their local hospital.

‘I am encouraged by this new survey, which shows great strides have already been made towards a smoke-free NHS, I strongly urge all trusts to follow suit.’

Smoking is one of the biggest causes of death.

PHE said hospitals were making ‘steady progress’ towards becoming progress, based on the results of its poll of 145 acute trusts. 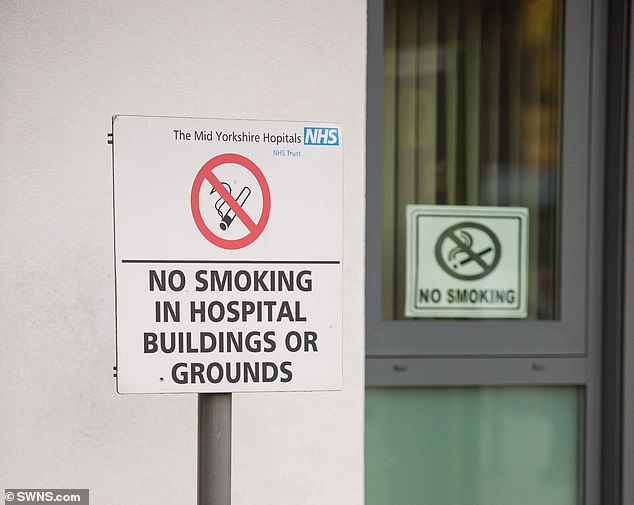 Some 69 per cent of NHS acute trusts in England, 100 of them, now ban smoking completely  on their grounds.

But up to 45 trusts have not yet enforced total smoking bans across hospital premises, according to the survey by PHE.

Of these, 11 did not respond to questioning but were told by PHE it would be assumed they did not have a smoking ban in place.

PHE did not name the trusts that still allow smoking on their premises because they were all promised anonymity for taking part.

However, it named some ‘good examples’ of smoke-free policies at trusts, including Northumbria Healthcare NHS Foundation Trust.

The trust, which serves around half a million patients, has replaced all of its smoking shelters with trees and plants.

Mid-Yorkshire Hospitals NHS Trust has a tannoy announcement system that plays anti-smoking reminders recorded by children at the press of a button.

Great Western Hospitals NHS Foundation uses a similar tactic, playing messages in a child’s voice such as: ‘My grandfather is receiving treatment in this hospital, please do not smoke.’

At the time, it said NHS hospitals in England should ban smoking on their premises and staff should be told not to help patients who want to smoke.

PHE’s boss, Duncan Selbie, wrote to the chief executive of every English trust in 2016, asking for their commitment to work towards a ‘truly smoke-free NHS’.

Mr Selbie said today: ‘One in four hospital beds are occupied by a smoker and most of them want to quit.

‘Many patients or visitors will be going through difficult times but smoking remains England’s biggest preventable killer.’

Commenting on his agency’s report, he added: ‘It is time for the NHS to stop smoking within its hospital grounds, everywhere.

‘It cannot be right that it is more acceptable in some hospitals to smoke at the front door than it is outside a pub.’

Smoking is on the decline in the UK with just one in six adults now regularly lighting up and 680,000 giving up the habit completely in 2016.

WHAT MEASURES HAS THE UK GOVERNMENT TAKEN TO SLASH SMOKING RATES?

Billboard advertising of tobacco was banned in the UK in 2003.

Smoking in public places was prohibited in 2007 to protect people from the dangers of second hand smoking.

Off the back of this success, the Government extended this legislation to cover private vehicles carrying children from October 2015.

In 2016, it set out to tackle access to cheap tobacco, which included increasing the tax on hand-rolling tobacco by an additional three per cent.

The same year saw the introduction of the Tobacco Products Directive in the UK.

Among other things, this enforced minimum sized health warnings on cigarette packaging.

Plain packaging was also introduced, which removed all promotional materials from the label, such as two-for-one deals.

It also ensured the brand name was presented in a standardised way, with the same font, size and case text.

Manufacturers were also told all tobacco packets had to be an olive-green colour.

The drab brown hue was selected due to it being the shade that most puts off buyers, research has shown.

The legislation also required packets to contain a minimum of 20 cigarettes, with ten packs being phased out.

This was to ensure the pack is large enough to contain health warnings that cover 65 per cent of the front and back. The health warning also has to appear in photo and text form.

And there must be an information message on the side, such as ‘tobacco smoke contains over 70 substances known to cause cancer’.

In 2017 new legislation made it illegal to sell branded cigarettes in the UK.

A complete ban on menthol-flavoured cigarettes is set for May 2020, with other tastes already being prohibited, such as fruit and vanilla.

Related posts:
31/05/2019 Health News Comments Off on Almost a third of NHS hospitals still allow smoking on their premises
Categories
Recent Posts
We and our partners use cookies on this site to improve our service, perform analytics, personalize advertising, measure advertising performance, and remember website preferences.Ok