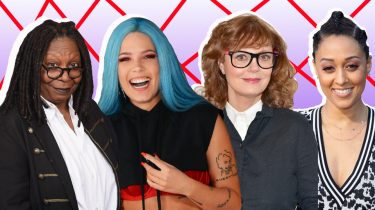 Endometriosis — a condition in which implants similar to the lining of the uterus are found outside the uterus and result in heavy, painful periods — is much more common than you think.

According to Endometriosis.org, 1 in 10 women has endometriosis — and 176 million people worldwide are affected by the disruptive condition. It is a serious but neglected public health issue. In fact, according to a National Institute of Child Health and Human Development-led study published in 2011, 11 percent of a group of women who had not been diagnosed with endometriosis had the disorder. And if the finding applies to all women in the United States, the number of American women with endometriosis could exceed previous estimates of 5 million.

Female celebrities aren’t excluded from this figure, of course.

Several famous faces have started speaking out about their struggles with the sometimes-debilitating condition in an attempt to destigmatize the wider discussion surrounding menstruation.

A version of this article was originally published in June 2017. 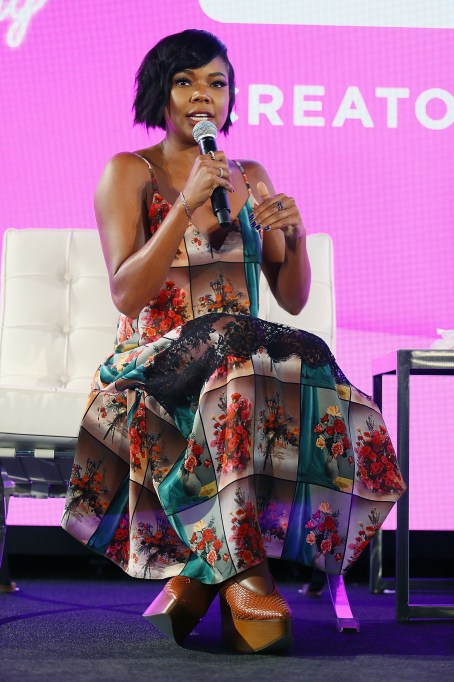 Speaking at the BlogHer18 Creators Summit in New York City, Gabrielle Union did not hold back when it came to discussing a condition she has called “adenomyosis.” Also known as “inside-out endometriosis,” it causes the endometrial tissue of the uterus cavity to grow into the uterus muscle, which damages the uterine wall. In addition to prolonged, heavy, painful periods, another symptom of adenomyosis is decreased fertility.

“I could have had adenomyosis in my early 20s, and instead of someone diagnosing me, they were like, ‘You have periods that last nine and 10 days? And you’re bleeding through overnight pads?’ It’s not a mere inconvenience. Perhaps there’s something more there,” Union said. 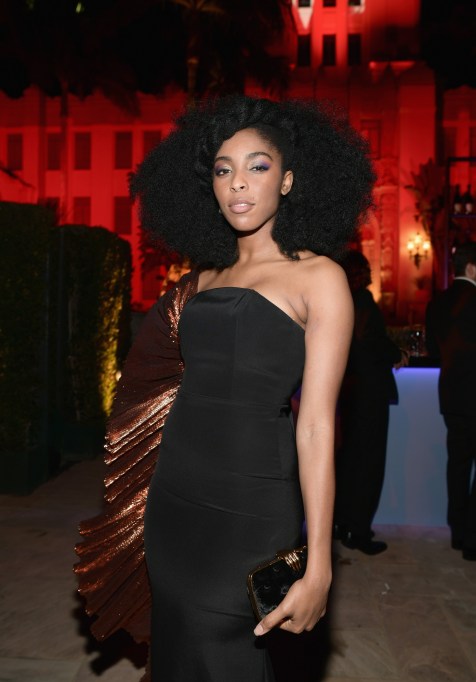 Actor and comedian Jessica Williams was only recently diagnoed with endometriosis, though has likely lived with it for 10 years, she noted in an Instagram post.

“In general I’m trying to get better at acknowledging that I am feeling pain and that it is okay and that I can be like ‘ohhhh okay I guess I’ll go home and crawl into bed and play Switch then,’” she wrote in her post. 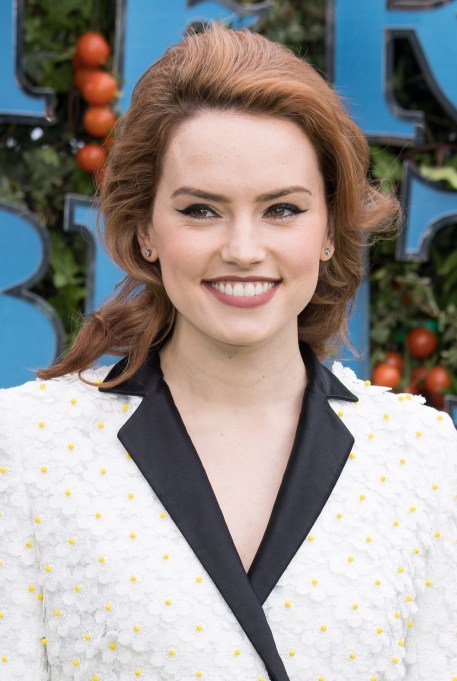 Star Wars: The Last Jedi's Daisy Ridley opened up about her endometriosis and polycystic ovary syndrome in an empowering, now-deleted Instagram post from 2016.

She wrote: "[T]o any of you who are suffering with anything, go to a doctor; pay for a specialist; get your hormones tested, get allergy testing; keep on top of how your body is feeling and don't worry about sounding like a hypochondriac. From your head to the tips of your toes we only have one body, let us all make sure ours our working in tip top condition, and take help if it's needed." 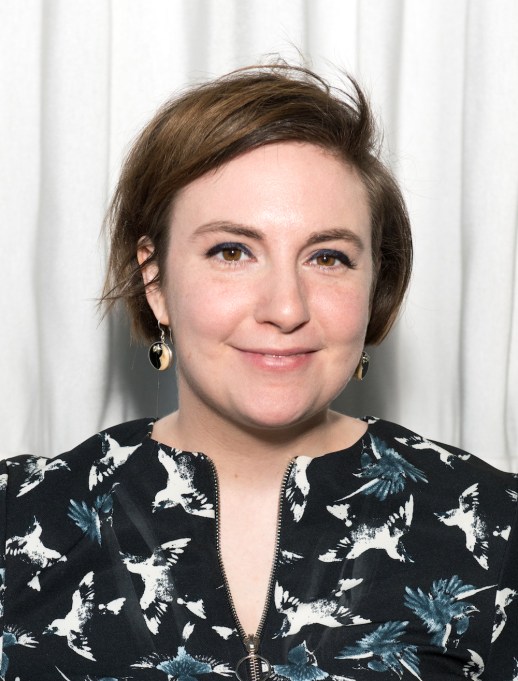 Writer, producer and actress Lena Dunham has battled endometriosis since her first period. She has undergone five surgeries to treat the condition in the past year alone and openly discusses how the disease has impacted her life through essays on her Lenny Letter site. 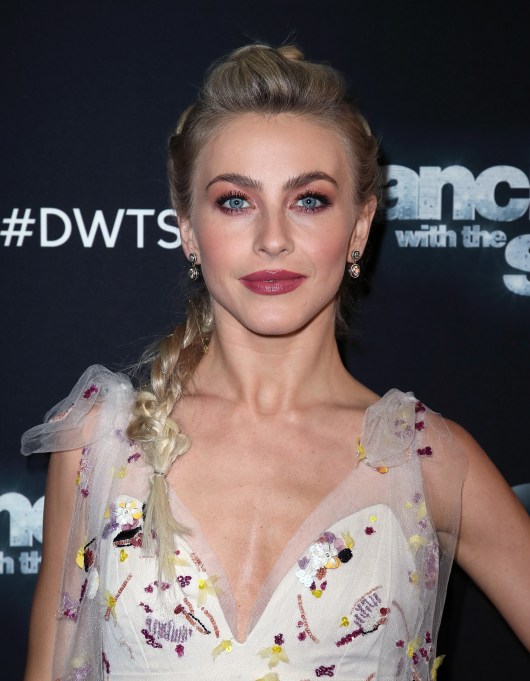 Julianne Hough told SheKnows she started having symptoms when she was 15 but wasn’t properly diagnosed with endometriosis until 2008 when the heavy bleeding and pain forced her to take time off from Dancing with the Stars for surgery and recovery.

To help people learn about the condition, Hough has become the face of an awareness campaign called Get in the Know about ME in Endometriosis. The dancer and actor stressed the importance of women being able to talk about the condition openly and being supportive of each other.

"So even if you're not the me in endometriosis, there might be someone around you who might be," she told SheKnows in March 2017. "It's all about starting this conversation. I want to be a voice and a person who can help women." 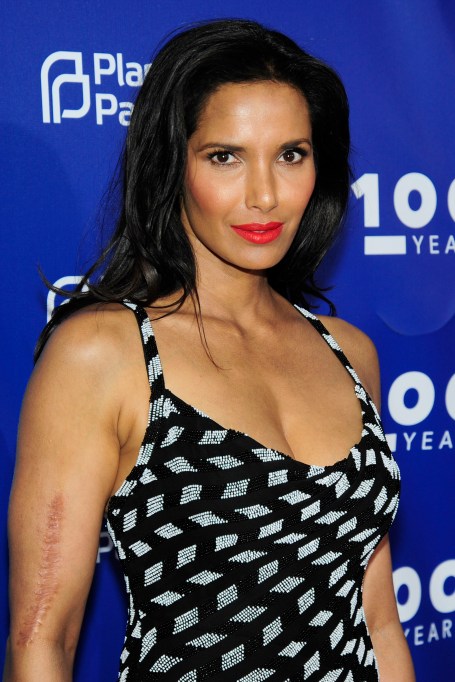 Over the past few years, Padma Lakshmi has become one of the most recognizable faces of endometriosis — so much so that she went on to co-found the Endometriosis Foundation of America. The TV host, model and author has discussed how despite being highly educated and living in a major city with access to high-quality health care, she initially had never heard of the disease. 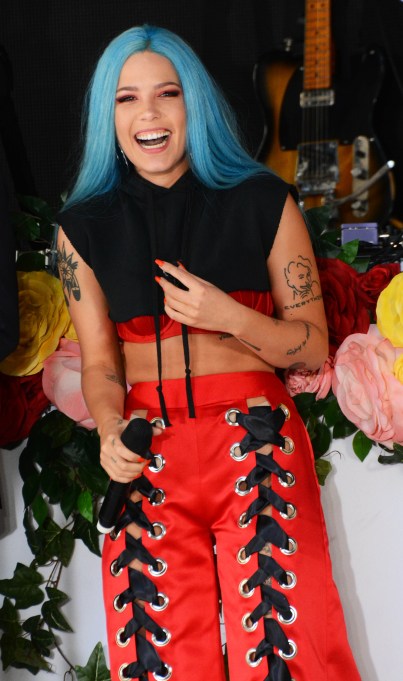 Singer Halsey was first diagnosed with endometriosis in January 2016 and underwent multiple surgeries to treat it one year later. In a post-op Instagram post tagged #endowarrior, she wrote: "For those of you who have followed this battle of mine or who may suffer with it yourself, you know the extremes to which it can be mentally exhausting and physically painful." 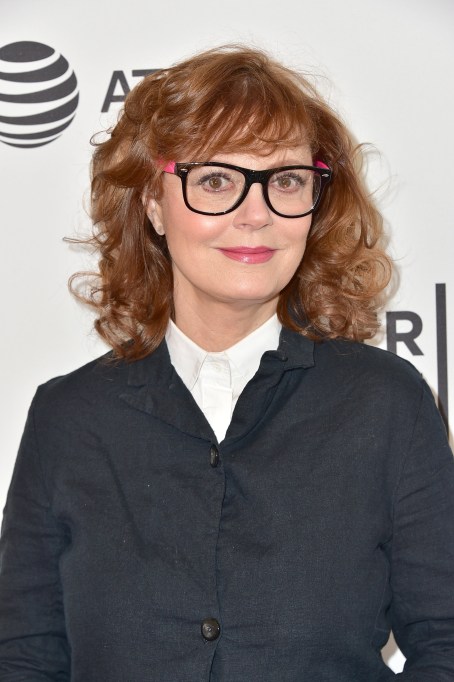 Susan Sarandon manages to raise awareness for endometriosis while stressing that the condition should not define those who suffer from it. After years of pain, she received what she describes as a "half-assed diagnosis," which included half-hearted treatments, but not a comprehensive explanation of what they were or how the disease worked.

"When all you know is pain, you don't know that that is not normal. It is not a woman's lot to suffer, even if we've been raised that way," she said at the Endometriosis Foundation of America's 3rd Blossom in 2011. 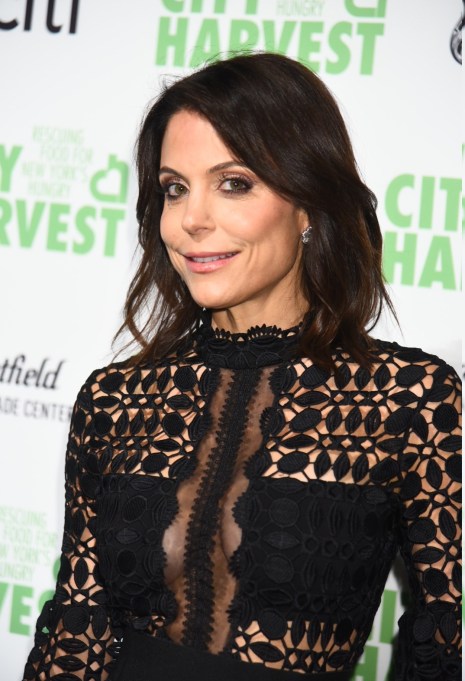 Bethenny Frankel had laparoscopic surgery in her early 30s to help treat her endometriosis and wasn't afraid to discuss her struggles with the disease. Several years prior, she experienced bad cramping and spotting and was diagnosed with cysts and fibroids on her uterus. Ultimately, she said it was getting pregnant that helped her pain subside the most.

"Don't feel shame," she wrote in an open letter on Facebook in 2016. "Other women are going through the same issue and it's okay to talk about it." 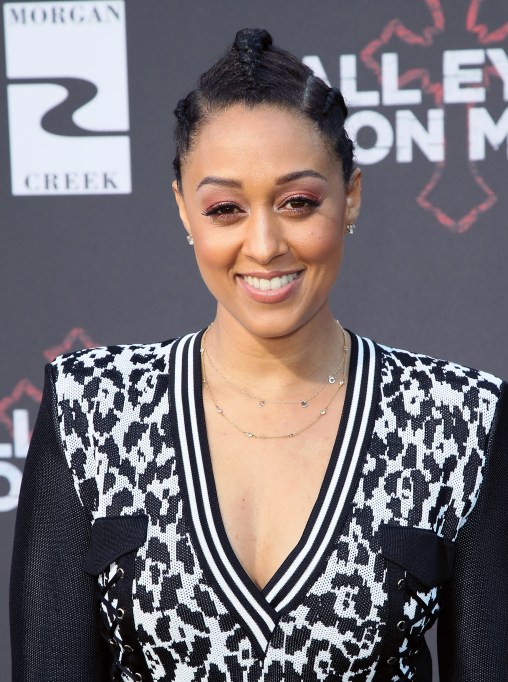 Tia Mowry-Hardrict spoke out about her endometriosis and is especially vocal about what she believes to be a connection between the condition and diet.

"The most surprising thing is how food can exacerbate inflammation or get rid of it," Mowry-Hardrict told SheKnows in 2016. "Food can be medicine, and if you eat foods that alkalize the body, it's amazing how that can slow down and fight inflammation." 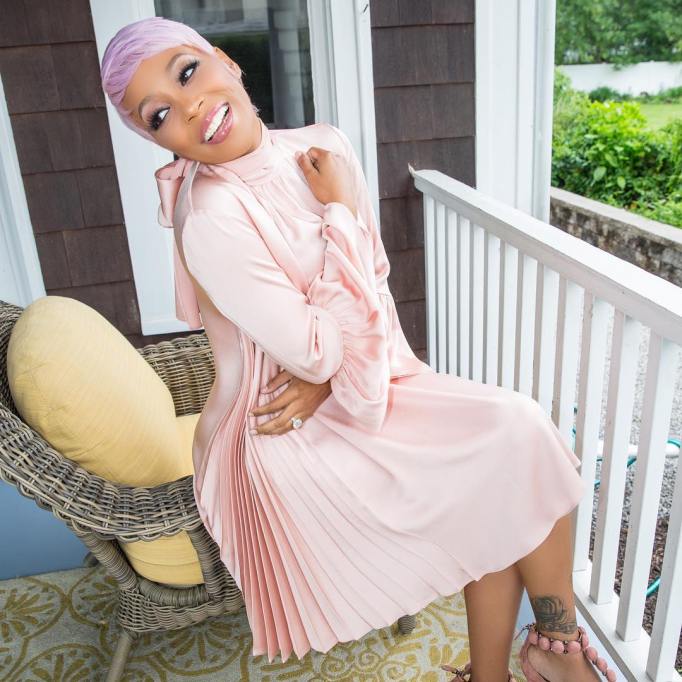 Monica publicly discussed her endometriosis in 2017 after undergoing an eight-hour surgery to remove cysts, fibroids, a hernia and endometrial tissue. The singer didn't know she had the condition until two weeks prior to her surgery.

She wrote on Instagram: "In life, we have to count it all joy and know the unplanned may be in his plan. May 30th I had an almost 8-hour surgery to remove my endometriosis (which I didn't know I had until two weeks prior), 2 cysts, fibroids and a hernia that all were making me very sick… I've known something was wrong, but I also knew victory & better health would be near again!! Thank you Dr. Ceana Nezhat & Northside Hospital Staff." 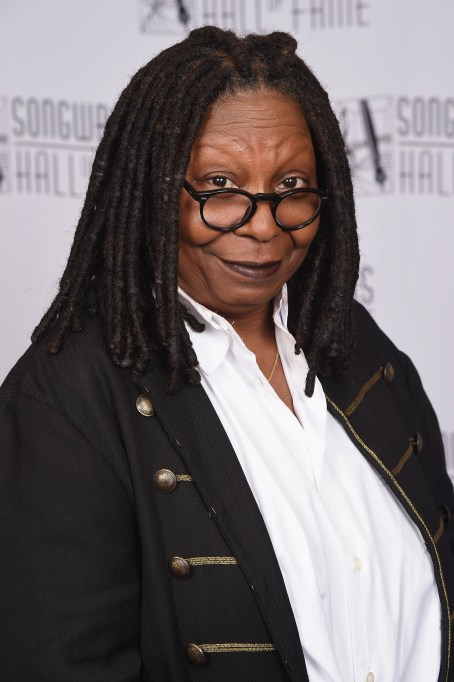 Whoopi Goldberg was never one to shy away from discussing important matters in women’s health, and endometriosis is no exception.

At the 2009 Endometriosis Foundation of America's Blossom Ball, she remarked, "If you don’t discuss it, many more women are going to find themselves unable to have children or find themselves close to dying because it's led to something else." 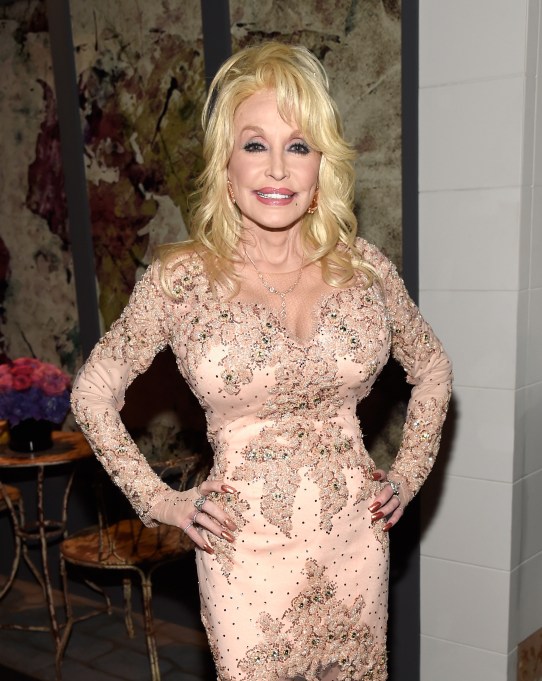 In 1985 at the age of 36, Dolly Parton underwent a partial hysterectomy to treat endometriosis.

Back in 2008, she spoke out about not only her surgery, but also the severe depression that followed when she realized that she would never be able to give birth. "It was an awful time for me. Every day I thought, 'I wish I had the nerve to kill myself,'" she said. 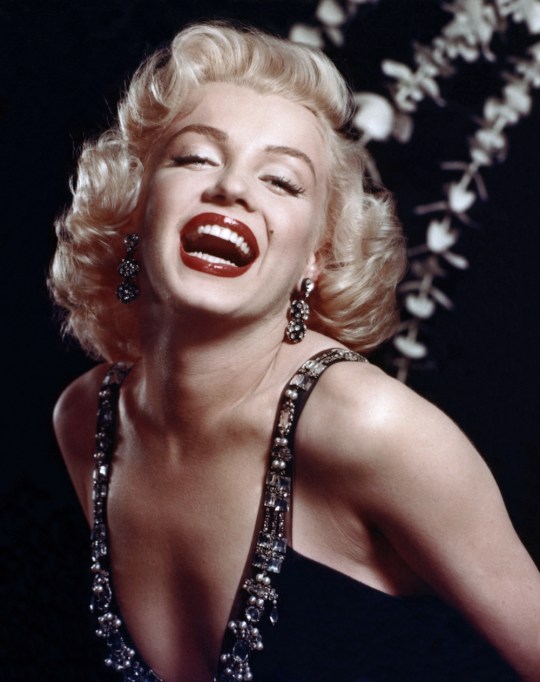 Marilyn Monroe's short life was full of pain — some of which came from having endometriosis. Though she made a secret of wanting to be a mother, all of her pregnancies ended in miscarriage or being ectopic.

Monroe's desire to become a mother was especially apparent in a note she taped to her stomach before going into surgery to have her appendix removed. In it she wrote, "Save please (I can't ask you enough) what you can — I'm in your hands. You have children and you must know what it means — please Dr. Rabwin — I know somehow you will! … For God's sakes Dear Doctor no ovaries removed."

Some have even linked endometriosis to the iconic actor's use of and later addiction to painkillers — which ultimately ended her life — but there is no definitive proof of this.

Related posts:
09/01/2019 Health News Comments Off on 14 Celebrities Who Have Opened Up About Their Endometriosis
Categories
Recent Posts