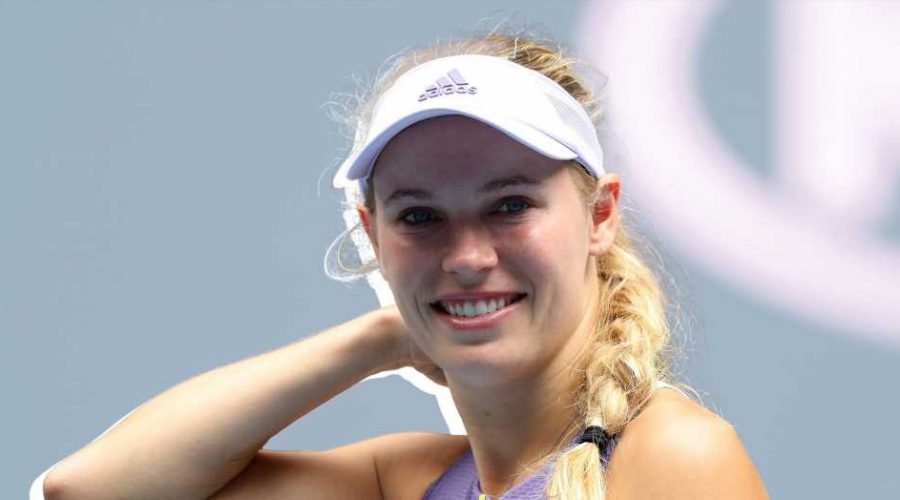 Professional tennis player Caroline Wozniacki was at the top of her game in 2018, but when the 30-time Women’s Tennis Association singles title winner began feeling ill in August—after playing at Wimbledon, no less—she knew something was wrong.

“After Wimbledon, I just feel like I had the flu and wasn’t feeling well. I took some time off from tennis and training in the gym and was just going to relax, but I wasn’t feeling better. So I decided to go back to training and see what happens,” Wozniacki, now 30, tells Health.

But after flying to Washington DC for another tournament, Wozniacki only felt worse. “Before the tournament, I started having some pain in my joints, and I told my dad that maybe we should skip this week, so I withdrew from the tournament to be ready for Montreal, which was a bigger tournament,” Wozniacki says. “Something was off when I practiced. Day to day, I felt exhausted and was dizzy on the court. I also had pain in some joints.”

Unfortunately, her mysterious symptoms continued to lead to more setbacks. Soon after withdrawing from the Washington Open, Wozniacki played at the Rogers Cup in Montreal and lost her first-round match in just under three hours. While Wozniacki was devastated from her loss, she was anxious to recover and get ready for her next match in Cincinnati. The next morning, however, she couldn’t move her arms and hands.

“I looked over at my husband and told him I couldn’t move. I was in so much pain and felt exhausted. I said something is serious here. When I arrived in Cincinnati, I went to see a doctor—an exercise physiologist—because I felt extreme pain in my shoulders, elbows and hands. I had to hold my elbows in my hands so they wouldn’t move. It felt like my shoulders were out of socket,” Wozniacki says.

Wozniacki’s joints were swollen, but her doctor didn’t see any damage to her ligaments at the time—and because of that, Wozniacki chalked it up to her demanding travel schedule, intense training, and challenging matches. She received some treatment for her achy joints, but her condition wasn’t improving. “I was feeling some symptoms like a lot of women that have an autoimmune disease but don’t really know they have it. You start by feeling a little better or a little worse, but it comes down to feeling very tired or overworked,” she says. “I never really paid attention to it because of the grueling schedule of being a professional tennis player. You just think you’ve overworked yourself.”

Wozniacki didn't know it yet, but she was suffering from rheumatoid arthritis (RA), a chronic autoimmune disorder that causes pain, swelling, and inflammation in the joints—and it would take multiple doctors, blood tests, and worsening symptoms to get a correct diagnosis.

That’s when Wozniacki decided to see another doctor to get to the root of her health problems. But instead of getting the help and assurance she needed, she was met with a lot of resistance. “They said, ‘Maybe you’re in bad shape. Maybe it’s mental. Maybe you’re pregnant.’ They were throwing all of these things at me, but I was telling them I’m in great shape,” she says. In fact, earlier that year, Wozniacki won her first Grand Slam title at the Australian Open and was the number one seed in the world.

After insisting on getting multiple blood tests, her doctor finally gave in, but the results didn’t provide the answers she needed or reveal any issues with her health. Wozniacki grew frustrated that doctors couldn’t figure out what was going on and why she was experiencing so much joint pain and fatigue. “They basically called me crazy. I went to see another doctor in Cincinnati, and he just wanted to put me on pain killers and tell me that I’m going to be fine, but I’m not fine. I’m not feeling better. I looked tired and didn’t feel myself,” she says. “When I felt my worst, it feels like you’ve been hit by a bus," she says. "You feel so exhausted that it’s even tiring to get out of bed."

Finally, after meeting with a fifth doctor in New York City, Wozniacki got some answers about her strange symptoms. “Because I was so persistent, he just did a bunch of tests,” Wozniacki says. The initial results of her tests showed that she has an autoimmune disease, but whether it was RA, lupus or another illness wasn’t clear. After several other tests, Wozniacki was diagnosed with RA in September 2018.

At first, she was confused about what it meant to have the disease and how she could have developed it. To her, the word arthritis conjured up the condition associated with aging, and no one in her family has a history of an autoimmune disease. “I was 27 years old and the number two tennis player in the world. I’m in great shape and eat well. I do all the right things,” Wozniacki says.

But just like the 1.5 million American adults affected by RA, according to the Arthritis Foundation, Wozniacki couldn’t have prevented the disease, no matter how healthy or fit she is. Autoimmune diseases, like RA, can happen to anyone, regardless of gender or age. Health experts aren’t sure what the exact causes of RA are, but women are three times more likely than men to develop RA, and it most commonly develops in women between the ages of 30 and 60.

Moreover, women from certain ethnic groups are more vulnerable to developing autoimmune diseases than others. For example, Black, Hispanic, Asian and Native American women are two to three times more likely to develop an autoimmune disease than Caucasian women, according to the American Autoimmune Related Diseases Association.

“It’s really hard to say why [I developed RA] because I don’t really know. There’s no one in my family that we know of that has RA or an autoimmune disease, unless someone is undiagnosed. It could be triggered by various things, like I was exhausted and my immune system was compromised at the time,” Wozniacki says. “Honestly, I was experiencing symptoms for quite some time, but it really took me being bedridden to really be like something isn’t right here.”

Even after her diagnosis, Wozniacki was determined to continue playing tennis and living a normal, healthy life

“After the US Open, I played in Beijing at the China Open and won one of my biggest tournaments. It was so emotional for me. The fact that I proved to myself that I could do it. With the right care and people around you, you can really do so much, and that’s why I want to be an inspiration for other women going through the same thing,” Wozniacki says.

Since her diagnosis, Wozniacki says she has been able to keep her RA under control through a combination of treatment and a healthy diet and exercise routine. “It’s important to have an open dialogue with your doctor about your treatment. For my treatment, I keep it to myself because what works for me might not work for the next person. It could be different,” she says.

Today, there are countless treatments for RA, including disease-modifying anti rheumatic drugs (DMARDs), non steroidal anti-inflammatory drugs (NSAIDs) and low-dose corticosteroids, per the American College of Rheumatology. Patients with more serious cases of the disease may also need biologics, which block immune system chemical signals that lead to inflammation and joint damage.

Wozniacki says she has made adjustments to her lifestyle that help prevent RA flare-ups, like getting enough quality sleep at night, staying active and eating an anti-inflammatory diet. “I get up and walk. Moving around for 30 minutes a day has really helped. Sometimes I take a nice, warm relaxing bath. It helps me avoid stress,” Wozniacki says.

In addition to running, swimming, and strength training, Wozniacki says she has also taken up yoga and Pilates. As for playing tennis? After almost 15 years of playing professional tennis, Wozniacki retired from the sport in January 2020. She still picks up her racquet, but she has learned how to listen to her body and knows when she needs to take it down a notch.

“Tennis is such a brutal sport and there’s so much stress with traveling and playing matches every day. It’s a great sport, and I really learned to listen to my body and not push myself over the limit. I just really needed to listen to myself. When I was exhausted, I needed to take it down a notch, and if I was feeling good, then I could go heavy,” she says.

When flare-ups do happen, Wozniacki says the first signs are usually swelling and pain in her hands and feet. “I can feel it through my rings. My rings don’t fit on my fingers on some days. They kind of slide off,” she says. In addition, RA has affected her voice, causing it to sound raspy. “The joint next to your vocal cords can get inflamed and start to swell. When I have a flare-up, my voice gets more raspy,” she says.

According to the Arthritis Foundation, hoarseness in patients with RA can happen because of the inflammation in the cricoarytenoid joints, which are next to the vocal cords and are responsible for helping open and close them when you speak or breathe. This inflammation can also lead to swallowing issues. In addition, a June 2013 review in Autoimmune Diseases shows that RA can affect the larynx, aka the voice box, which aids in breathing, producing sound and swallowing food.

As part of the Advantage Hers campaign, and in partnership with UCB, a global biopharmaceutical company, Wozniacki aims to encourage women living with chronic inflammatory diseases—like RA, psoriatic arthritis, and axial spondyloarthritis—to share their stories and connect with each other.

“It takes a long time for a lot of women to get diagnosed, and a lot of doctors don’t take their symptoms seriously at first because autoimmune diseases aren’t on a lot of doctors’ radars,” Wozniacki says.

“I want women to know that if they have pain in the joints and feel exhausted, they should talk to their doctors about getting tested for RA or other autoimmune diseases," she says. "Women know their bodies so well and know when something isn’t right. I want women to know that they’re not alone. We are here to help you through the good days and the bad days.”

Related posts:
17/09/2020 Personal Health Comments Off on Caroline Wozniacki Opens Up About Her Rheumatoid Arthritis Diagnosis: "I was in so much pain and felt exhausted"
Categories
Recent Posts
We and our partners use cookies on this site to improve our service, perform analytics, personalize advertising, measure advertising performance, and remember website preferences.Ok