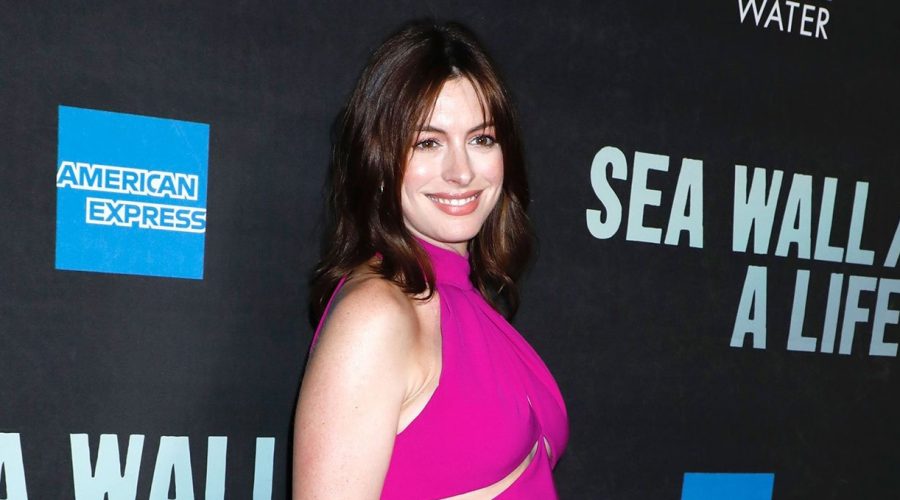 Talk about a glow! Anne Hathaway showed off her growing baby bump two weeks after announcing that she is expecting her second child with husband Adam Shulman.

The actress, 36, walked the red carpet at the Thursday, August 8, opening of Broadway play Sea Wall/A Life at the Hudson Theatre in New York City. Hathaway wore a hot pink tea-length dress that featured a high neck and cutouts above her burgeoning belly.

Shulman, 38, joined the Oscar winner for the event. Hathaway’s Love & Other Drugs costar Jake Gyllenhaal stars in the production alongside Tom Sturridge.

The Princess Diaries star revealed her pregnancy in a July 24 Instagram post. “It’s not for a movie… #2,” she captioned a black-and-white selfie of her bump. “All kidding aside, for everyone going through infertility and conception hell, please know it was not a straight line to either of my pregnancies. Sending you extra love.”

Hathaway and Shulman are already parents of son Jonathan, 3. The couple tied the knot in September 2012.

The Modern Love actress previously opened up about her pregnancy’s effect on her mind. “My brain won’t let me go there right now,” she told Us Weekly and other reporters at the Television Critics Association summer press tour on July 27. “I’m sorry.” Her response followed a question about whether her younger self would have thought she’d act in superhero films rather than romantic comedies.

She added of her mom brain: “Somebody’s eating it.”

Hathaway joked about her memory during a panel after she repeated something she had said earlier. “I’m pregnant and I don’t remember what I say from minute to minute,” she offered.

The Ocean’s 8 star told Entertainment Tonight about getting pregnant after fertility issues, “This is something I’ve been wanting for a while and I’m really happy it’s happening.”

Scroll to see more photos of Hathaway’s bump on the red carpet!