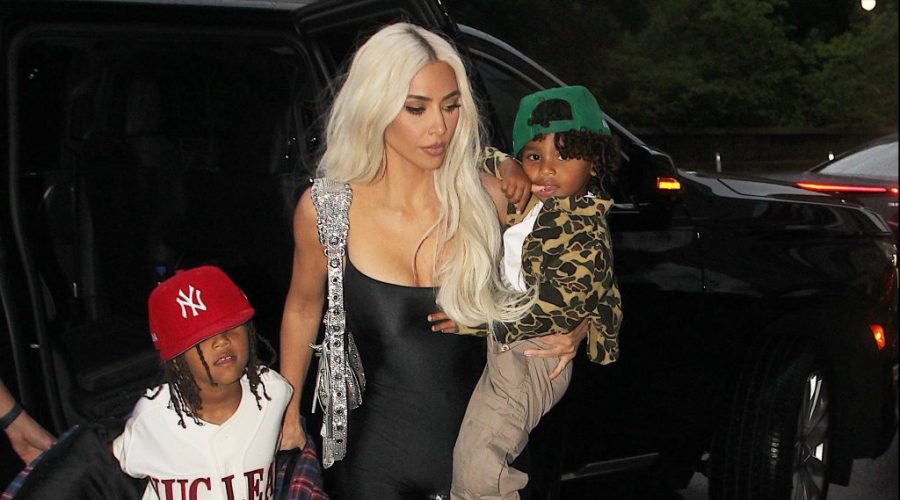 Bringing your kids to work sounds fun in theory (kind of?), but reality is a much different story. A few hours after Kim Kardashian tried to go on Instagram Live with her sons Saint, 6, and Psalm, 3 — which ended in chaos as her boys told the camera “I hate you” among other things — she took her boys to work with her on “The Tonight Show” with Jimmy Fallon. The kids, whom she shares with ex Kanye West, were being so loud in the audience as Kardashian gave an interview on live TV. She actually had to stop several times to admonish them.

“Guys, can you stop? This is like your first time at work with me,” The Kardashians star says, while looking over at her kids in the audience. “Can you please?”

Fallon says, “Your kids are right there,” as the camera pans to show Saint and Psalm as the audience cheers.

“My two boys are here,” Kardashian explains, adding that they are sitting with a friend.

After Fallon welcomes the kids, Kardashian says, “My two boys are here and I hear them making so much noise. Guys, this is your first time at work with me, don’t mess this up. C’mon!” which makes Fallon burst out laughing.

Scolding your kids in public while trying to remain cool and collected is challenging at the best of times. But imagine doing it on live TV? She deserves an award for her level-headedness!

During the interview, Kardashian also talked about her daughters, whom she also shares with West. She mentioned 9-year-old North is obsession with special effects makeup. “So, she’s really into special effects makeup,” the SKIMS founder says. “She does like really good wounds and scars, she’s really good at it. She wanted to have a spooky, wilderness-themed birthday party, so I took them out camping in the wilderness —”

At this point, she abruptly stops and turns to her sons again. “Guys, seriously,” she says. “You got to go.” Then she added, “OK, Psalmy left. He was being loud.”

A 3-year-old melting down during a public event? Celebrities — and royals — can’t escape the wild nature of toddlers!

Kardashian continued her story about North, revealing that she wanted a “spooky” birthday party. “We took about eight girls, and we went camping in the wilderness,” Kardashian says. “And she wanted it to be really spooky, and she wanted these mannequin heads. She taught her friends how to do special effects wounds and scars.”

Doing scary makeup isn’t the only thing North enjoys. Kardashian shared that North knows “We Don’t Talk About Bruno” from Encanto in eight languages, and loves singing the song. Fallon showed a clip of North singing, prompting Kardashian to comment about Saint in the audience again: “That got a smile on his face!”

“My two girls are [performers],” she adds about North and Chicago, 4. “My littlest daughter Chi Chi, she just had a performance, and the teacher told us when she went back after the performance, she goes, ‘Can I go out there again and do it again? I loved everyone clapping for me.’” They’re going to be little stars like their parents!

Before the end of the interview, she calls out to Saint one more time. As she was putting her SKKN by Kim skin care on Fallon, Kardashian calls over to the audience, “Saint, am I doing a good job?” and Fallon responds, “Saint, help me, please” while laughing.

Defaulting to humor is always a good idea when you’re frustrated with your kids. The moment may have been stressful to Kardashian, but it felt refreshingly real and oh-so-relatable to all the parents of young kids watching!

These relatable moments show that Kate Middleton may be a royal mom — but she’s a regular mom too.