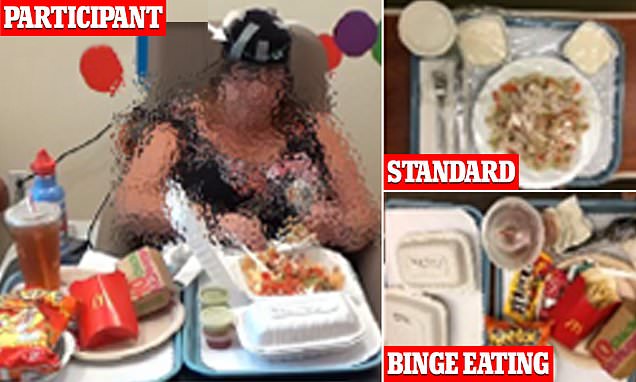 Zapping your brain with electricity could help stop ‘loss of control’ binge eating and treat conditions like obesity, study finds

Electricity may be able to manipulate the part of a person’s brain linked to losing control while eating to help control impulses and lose weight, a study has found.

Researchers led by the University of Pennsylvania recruited two morbidly obese women who regularly binge ate — consumed a lot of food in a short period — at least three times a week. After six months of the treatment they did this less than once a week and both lost at least 12 pounds (six kilograms).

Participants had electrodes implanted into an area of the brain called the hypothalamus — scientifically named the nucleus accumbens — which researchers suggested triggers binge eating by emitting low-frequency signals. These were connected to a neurotransmitter, a device similar to a pacemaker, which released signals to counteract these waves. Neither participant felt any pair.

Current weight loss treatments focus on surgery and therapy, but scientists hope that despite its high cost this may soon be an alternative for patients. More than two-thirds of Americans are overweight with over 40 percent being classified as obese, the Centers for Disease Control and Prevention (CDC) says, with around three percent regularly binge eating. 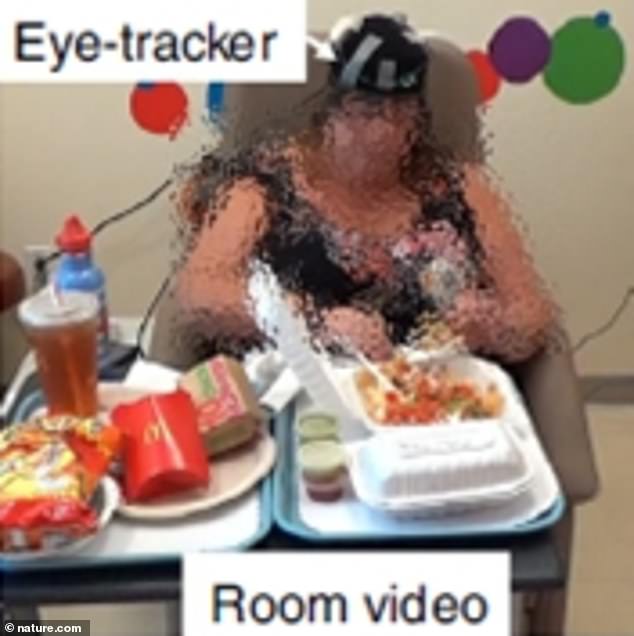 Pictured above is one of the study participants for the University of Pennsylvania research. She is shown in front of meal options when scientists were measuring brain activity during binge eating against standard meals 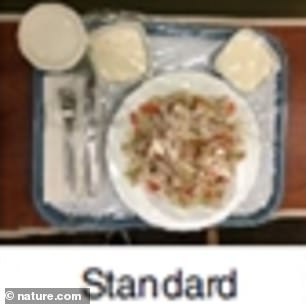 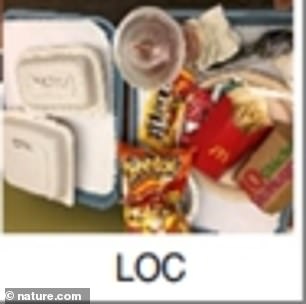 The above shows the amount of food consumed during a standard meal (left) and binge eating, when subjects lose control and consume a lot of food in a short period (right) 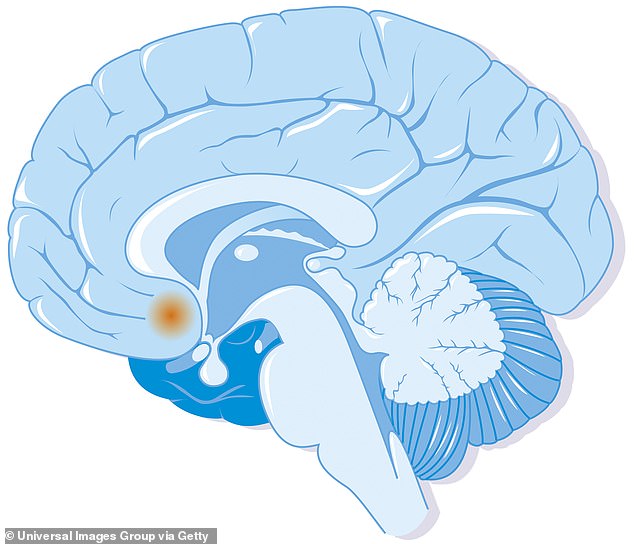 To combat binge eating the researchers influenced an area of the hypothalamus scientifically named the nucleus accumbens (shown above by the dot). It releases low-frequency waves during ‘loss of control’ binge eating, but not during standard meals. Scientists hoped that by influencing it they could cut this behavior

Both had gastric bypass surgery in 2005, but had since regained the at least 123 lbs (56 kg) they lost over the next decade and a half.

They also had ‘loss of control’ eating — which is when someone keeps eating food due to hunger or a craving despite the brain signaling the stomach is full. This leads to binge eating.

• 30 grams of fiber a day: This is the same as eating all of the following: 5 portions of fruit and vegetables, 2 whole-wheat cereal biscuits, 2 thick slices of whole meal bread and large baked potato with the skin on

At the start of the study, the women were presented with food they normally binge ate and had their brain waves monitored.

Results showed that low-frequency waves were emitted by an area of the hypothalamus — scientifically named the nucleus accumbens — just they bit down on food during loss of control eating.

But these same waves were not seen when participants were presented with a standard meal that they would normally consume.

These observations were then confirmed over three months where the scientists monitored activity in the brain.

In the experiment, the neurotransmitters were then switched to zapping the brain with high-frequency waves every time they detected the low-frequency signals that a participant may be binge eating without control.

But because the trial was blinded and the zaps caused no pain, the women were not aware when the devices were running.

Results showed, however, that they may have helped the women lose weight.

The 45-year-old lost 13 lbs (5.9 kg) over the year study, and saw her binge eating episodes drop 80 percent to around once a week.

But the 56-year-old lost 18 lbs (8.2 kg) and saw her binge eating episodes drop by almost 90 percent — to the extent that she was no longer considered a binge eater.

Dr Casey Halpern, a neurosurgeon who led the study, and others said: ‘We’ve helped patients with severe obesity lose weight without providing them instruction or guidance on a dietary plan.

‘This supports stimulation-induced restoration of control in these subjects being the underlying mechanism of [weight loss].’

The experiment is now planned to be repeated on another four people, to firm up the results.

The researchers said, however, that it was possible they had missed other events when the low-frequency waves linked to ‘loss of control’ eating may be triggered.

The research builds on Halpern’s study from 2012, which also found that zapping the brain with electrical pulses could help with weight loss.

But these experiments were carried out on mice — with the latest being the first done on humans.

At the time, Halpern said: ‘Doing brain surgery for obesity treatment is a controversial idea.

‘However, binge eating is a common feature of obese patients that frequently is associated with suboptimal treatment outcomes.’