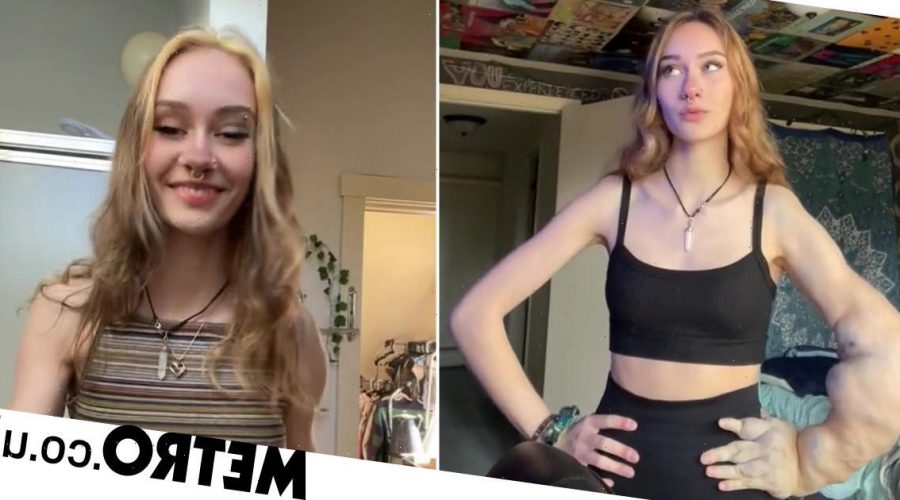 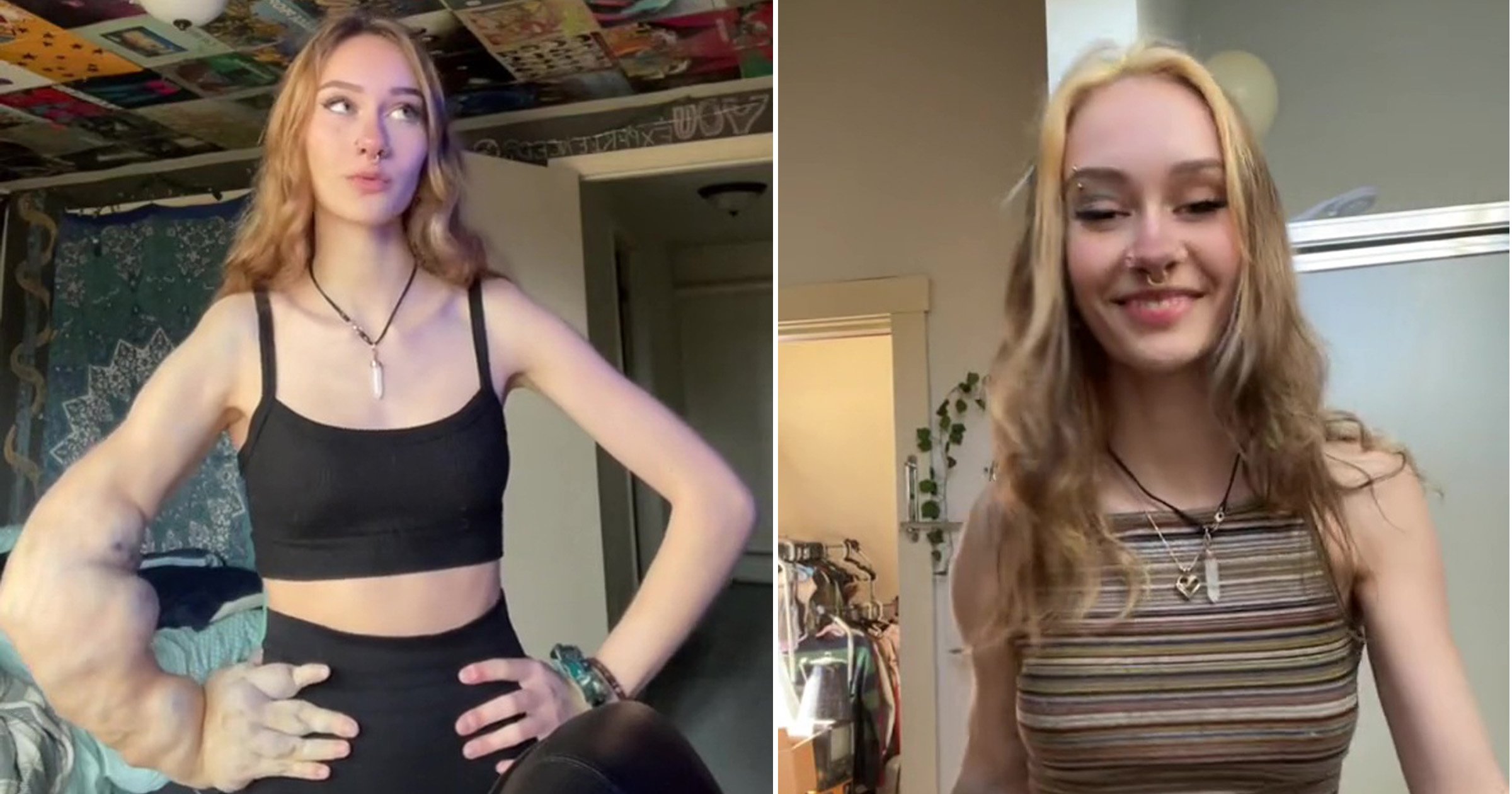 Olivia Klopchin, 18, from Springfield, Vermont, US, was diagnosed with a vascular malformation at two months old when her family noticed a bruise on the inside of her elbow that had been there since birth.

A vascular malformation is an abnormal development of blood vessels. These can cause discolouration or protrusions in the affected region.

For Olivia, the condition has meant her hand and arm have grown extremely large with the skin slightly discoloured.

While she has always attracted stares and suffers from painful blood clotting from time to time, she was stunned when videos she posted of herself to her 250,000 followers on TikTok (@oliviaklopchin_) received horrible comments from trolls.

Many wrote to her to say she should amputate her arm, even though it is fully functioning

In one post, Olivia poses with her hands on her hips and lip reads to a popular sound: ‘Take it off? I would rather die’ in response to people telling her to amputate her arm.

To view this video please enable JavaScript, and consider upgrading to a webbrowser thatsupports HTML5video

One critic commented: ‘Personally I’d rather have a really nice prosthetic, and I could decorate it, but that’s just me.’

While another added: ‘You’d look a lot better without it tho so. [sic]’

Thankfully, many others have defended her.

‘People really would rather that you lose an entirely functional limb because they don’t find it aesthetically pleasing,’ one person wrote.

Olivia never planned to make content just about her arm but she felt it was natural for her.

‘I didn’t start TikTok planning to make videos about my arm and have all these wonderful opportunities in life because of it, but that is something I have always wanted to do,’ she said.

‘I had never seen anyone with anything similar to me on the Internet before and once I started to get these opportunities, I took them straight away because I wanted people like myself to be able to go on their phones and say “hey that person has what I have” or “hey they look like me.”

‘I’ve definitely had a lot of interesting reactions to my arm on the internet.

‘Some people are so awesome about it and tell me how beautiful I am and how much they love my confidence.’

She continued: ‘But then there’s the negative people who try to tear me down and break my wall but there’s always going to be negative people on the internet – that’s something we can’t escape, whether we want to or not.

‘Negativity on the internet has consumed so many people’s lives, but I choose not to let it consume mine.

‘I can’t let somebody’s comment who I don’t even know bother me.

‘I had never heard things like what people had said to me in a comment section in real life before, so when I first started TikTok it was a bit overwhelming but unfortunately you get used to it.’

Olivia has never contemplated amputating her arm and doesn’t think she ever will.

‘I never had a rough time with it growing up,’ she explained. ‘Of course, I got stares from people but I understood at a young age that I was different and that people were going to stare and that there was nothing I could do about it.

‘With vascular malformations, there is pain because we do get blood clots and blood clots are formed from the veins not having a muscular wall around them so our veins expand and blood can’t flow through easily so it clots up. And blood clots can be very, very painful.

‘Fortunately I don’t get them as often as a lot of other people that I know with vascular malformations. I’d say I get three bad ones a year other than that I get a couple monthly but they’re not too painful.

‘Other than pushing through the pain, I was able to do sports, I would hang out with friends, and my friends would question things about my arm but I was always open and willing to answer the questions they had.

‘I am truly thankful that my arm hasn’t given me any downsides to life. I could consider the pain a downside but I choose not to.

‘[By sharing on TikTok] it makes me so happy that I have been able to help so many people just from them hearing my story and for them being able to tell me theirs.’

Related posts:
21/07/2022 Health News Comments Off on Woman born with one huge arm says strangers tell her to amputate it
Categories
Recent Posts