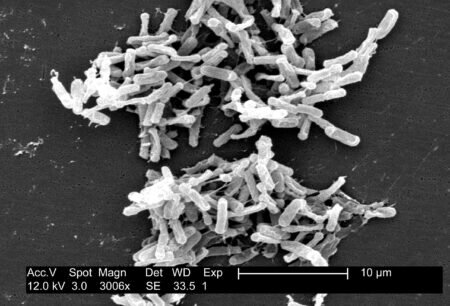 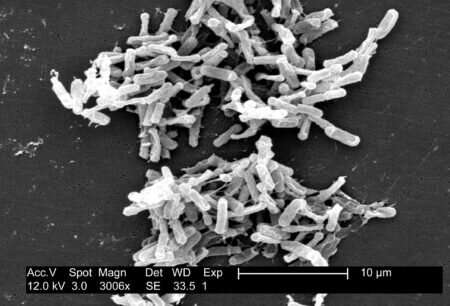 The world’s smallest arms race could be happening right now in your gut.

One of the world’s most dangerous superbugs runs rampant in Perth hospitals, but you’ve likely never heard of it.

Clostridioides difficile (also known as C. diff) is a bacterium that loves your gut. So much so, it infects almost every newborn. The current reasoning for this phenomenon is that newborns most likely have ‘sterile’ guts which means C. diff has no competition. The bacterium makes contact with a newborn via environmental contamination. Around 70% of infants have it in their gut, then eject it after the first 2 years.

C. diff can affect anyone, not just babies. While it is thought infants are immune to its toxins because they don’t yet have the cell receptors the toxin attaches to, adults have no such luck. But if you were infected as an infant, you will fare better against the bacterium as an adult.

When disease or antibiotics reduce our normal gut flora, C. diff comes calling. It can cause an infection of the large intestine, with symptoms of the illness ranging from diarrhea, pain, fever and even death.

The spore the merrier

Thanks to their endospores, C. diff infections are common and hard to eradicate from hospitals. The endospores protect the bacterium from harsh conditions and low nutrient levels—kind of like a little bacterial space suit.

Tom Riley is a Professor of Public Health at University of Western Australia. He has dedicated much of his career to understanding these superbugs.

Antibiotics are vital for treating infections. But the our overuse of broad-spectrum antibiotics is making our our guts vulnerable to infection.

“Antibiotics are more of a problem in terms of causing rather than curing the disease,” says Tom.

“If you have normal gut flora, you are not susceptible to infection.”

Cephalosporins are a group of broad-spectrum antibiotics. They work by interfering with a bacterial cell’s penicillin-binding proteins. These proteins help glue together cell walls. Without them, the bacterial cell breaks apart and the bacterium dies.

Unfortunately, cephalosporins destroy gut flora and are also associated with C. diff infection. With no other bacteria in the gut to compete with, C. diff can thrive. The wide use of cephalosporins as an antibiotic has changed where people are getting infected.

Tom says that, 20–30 years ago, most infections occurred inside hospitals.

“Now, most cases coming in are from outside the hospital,” says Tom.

While some governments are trying to remove cephalosporins from livestock medicine, the damage has been done. Most strains of C. diff are inherently resistant to third-generation cephalosporins.

“C. difficile is listed in the [United States Centre for Disease Control] top five urgent threats to public health,” Tom says. “Australians haven’t quite woken up to that fact yet.”

So what can we do?

And while this new trend is welcomed, the prescription of antibiotics is still a hard habit to kick. Antibiotics are one of the most significant advances ever made in medicine. They’re extremely helpful at tackling most bacterial infections.

However, the World Health Organization advises against taking antibiotics for colds and the flu. That’s because they’re viral infections that antibiotics aren’t designed to treat.

According to Tom, we also need to stop using human antibiotics in livestock. It creates a ripe breeding ground for zoonotic diseases (diseases that transfer from animals to humans).

Related posts:
19/08/2022 Health News Comments Off on The tiny killer in your gut
Categories
Recent Posts