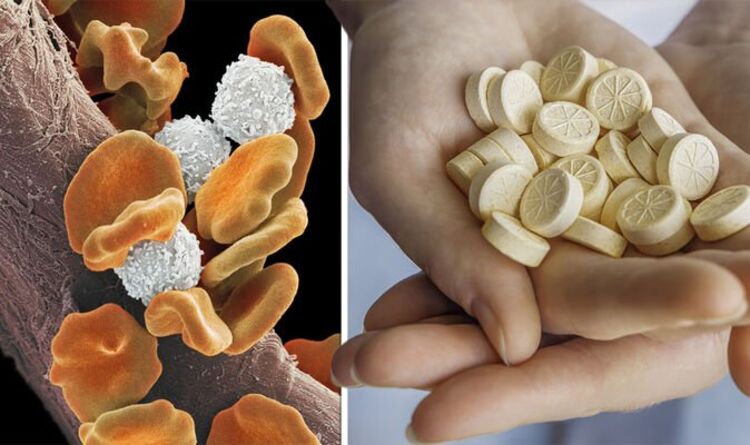 Cancer is rife across the world, but the cure for the disease still eludes researchers. Understanding the risk factors, however, has come to play a big part in tackling the disease, and the role of nutritional deficiencies have come into sharp focus. According to a growing body of research, vitamin C may play a key role in exterminating cancerous cells, preventing the disease from developing.

A series of experiments in mice have suggested vitamin C could help identify out-of-control cells and stop them from dividing.

Experts believe this could make the nutrient and key player blood cancer prevention, but further research suggests it could be instrumental in warding off other forms of the disease too.

A 2021 meta-analysis published in the journal BMC Medicine, showed that having adequate amounts of vitamin C should slash the risk of total cancer by 26 percent.

Speaking to the Leukaemia Foundation, Doctor Sean Morrison, a leading stem cell researcher, explained: “Part of what vitamin C does is that it suppresses the development of leukaemia from blood-forming stem cells.

READ MORE: Supplements: Health benefits and risks of too much vitamin C

“There were old epidemiological studies done, where it was seen that people with below-average vitamin C levels get more cancer, but the underlying mechanisms were not at all clear.

“We’ve discovered some of the underlying mechanics, where there is a particular tumour suppressor, called TET2, in the haematopoietic system that gets mutated in a lot of leukaemias.

“So, people who don’t get enough vitamin C in their diet don’t have adequate TET2 activity and they’re walking around with messed up stem cells in a way that predisposes them to leukaemia.”

While there is still no cure, the nutrient can have a curative effect on cancer, researchers have long sought to find out whether it could boost the effectiveness of other therapies.

When a deficiency develops, it can take up to 12 weeks to manifest symptomatically.

Warning signs of that deficiency is advanced include poor wound healing, gum swelling and loss of teeth.

But in the earlier stages, symptoms of low levels comprise tiredness and weakness, muscle and joint pains, and easy bruising.

This nutrient is easily sourced from fruits and vegetables, such as citrus, bell pepper, strawberries, tomatoes, cruciferous vegetables and white potatoes.

While a vitamin C deficiency is rare in more countries, it can result from a limited diet that fails to provide more than 10mg daily for one month or longer.

But other lifestyle habits can also hike the risk of developing a deficiency, with known causes including smoking or long-term exposure to secondhand smoke, or drug and alcohol abuse.

A deficiency that lasts more than three months is medically referred to as Scurvy, which can be corrected with vitamin C supplements.

The NHS explained: “Most people treated for scurvy feel better within 48 hours and make a full recovery within two weeks.”

A diagnosis is usually based on symptoms, but measuring levels of the nutrient in the blood can also help detect low levels.

Unfortunately, however, tests are rarely available and the NHS states that they can be difficult to interpret.