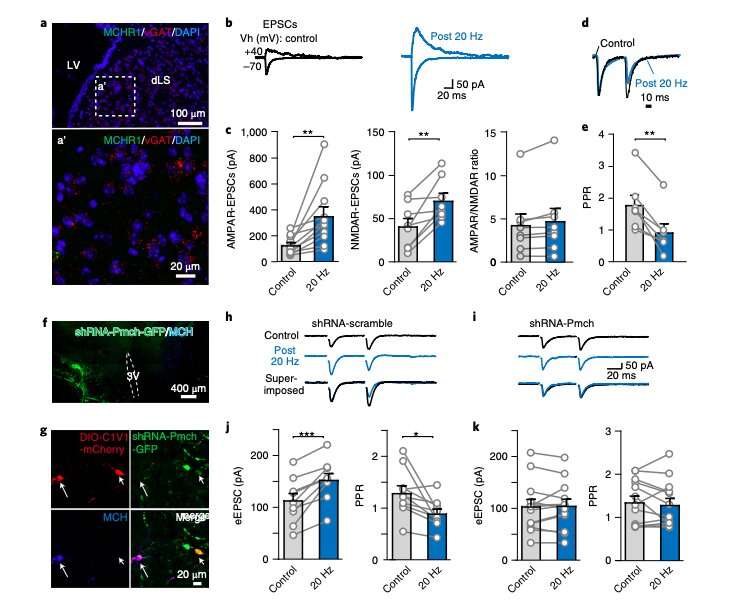 The melanin-concentrating hormone (MCH) is a neuropeptide (i.e., a compound that transmits information in the brain) produced by neurons in a region known as the lateral hypothalamic area (LHA). Past studies have found that in rodents, humans and other mammals, this hormone has very important functions, for instance regulating food intake, sleep, memory, stress, and energy levels.

While many neuroscientists have conducted studies investigating MCH and delineating its main functions, the mechanisms underpinning these functions are still poorly understood. For instance, the brain regions affected by the hormone and the ways in which they are affected have not yet been clearly identified.

Researchers at Rutgers University Robert Wood Johnson Medical School and NYU Neuroscience Institute have recently carried out a study aimed at further exploring the neural mechanisms through which MCH could help to regulate energy homeostasis, food intake, sleep, and memory. Their paper, published in Nature Neuroscience, shows that MCH regulates activity in the hippocampus and in a brain area known as the dorsolateral septum (dLS).

“In this study, on mice, we uncovered the physiological mechanism underlying the functional role of MCH signaling in projections to the dLS, a region involved in routing hippocampal firing rhythms and encoding spatial memory based on such rhythms,” Jing-Jing Liu, Richard W. Tsien and Zhiping P. Pang, the researchers who carried out the study, wrote in their paper.

As part of their study, Liu, Tsien and Pang conducted a series of experiments on mice, using a combination of different experimental techniques. This included genetics-based neural tracing methods and behavioral testing procedures.

First, the researchers injected a substance often used in genetic tracing experiments into the mice’s LHA. This allowed them to manipulate neuronal activity associated with MCH. In the same region, they also injected micro fluorescent RetroBeads, bioactive agents that can suppress or amplify the effects of neurotransmitters. The team observed the behavior of the mice before and after they injected these substances. Subsequently, they tried to gain a better understanding of the hormone’s effects on the dLS.

“Firing activity within the dLS in response to dorsal CA3 (dCA3) excitation is limited by strong feed-forward inhibition (FFI),” Liu, Tsien and Pang explained. “We found that MCH synchronizes dLS neuronal firing with its dCA3 inputs by enhancing GABA release, which subsequently reduces the FFI and augments dCA3 excitatory input strength, both via pre-synaptic mechanisms.”

The recent findings gathered by this team of researchers offer valuable new insight about the role of MCH signaling in the hippocampus and dLS. More specifically, they suggest that the hormone’s signaling in the dLS can facilitate spatial memory in mice.