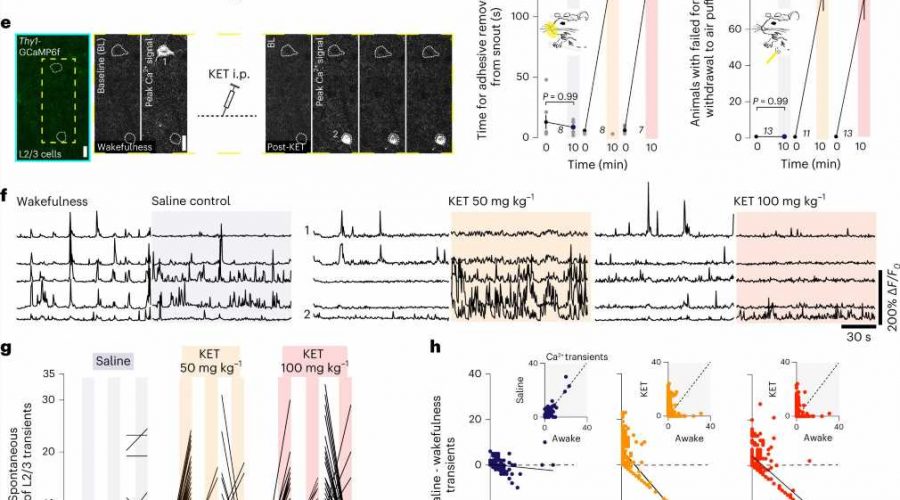 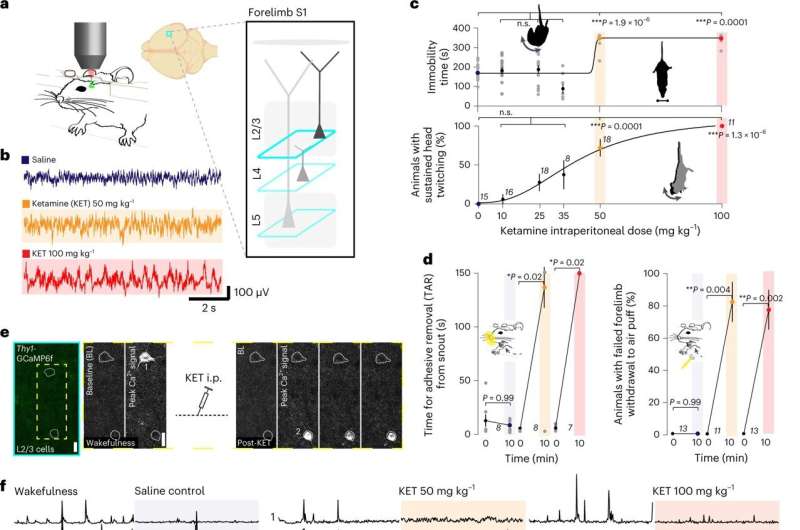 Ketamine, an established anesthetic and increasingly popular antidepressant, dramatically reorganizes activity in the brain, as if a switch had been flipped on its active circuits, according to a new study by Penn Medicine researchers.

In a Nature Neuroscience paper released this month, the team described starkly changed neuronal activity patterns in the cerebral cortex of animal models after ketamine administration—observing normally active neurons that were silenced and another set that were normally quiet suddenly springing to action. This ketamine-induced activity switch in key brain regions tied to depression may impact our understanding of ketamine’s treatment effects and future research in the field of neuropsychiatry.

“Our surprising results reveal two distinct populations of cortical neurons, one engaged in normal awake brain function, the other linked to the ketamine-induced brain state,” said the co-lead and co-senior author Joseph Cichon, MD, Ph.D., an assistant professor of Anesthesiology and Critical Care and Neuroscience in the Perelman School of Medicine at the University of Pennsylvania.

“It’s possible that this new network induced by ketamine enables dreams, hypnosis, or some type of unconscious state. And if that is determined to be true, this could also signal that it is the place where ketamine’s therapeutic effects take place.”

Anesthesiologists routinely deliver anesthetic drugs before surgeries to reversibly alter activity in the brain so that it enters its unconscious state. Since its synthesis in the 1960s, ketamine has been a mainstay in anesthesia practice because of its reliable physiological effects and safety profile.

One of ketamine’s signature characteristics is that it maintains some activity states across the surface of the brain (the cortex). This contrasts with most anesthetics, which work by totally suppressing brain activity. It is these preserved neuronal activities that are thought to be important for ketamine’s antidepressant effects in key brain areas related to depression. But, to date, how ketamine exerts these clinical effects remains mysterious.

In their new study, the researchers analyzed mouse behaviors before and after they were administered ketamine, comparing them to control mice who received placebo saline. One key observation was that those given ketamine, within minutes of injection, exhibited behavioral changes consistent with what is seen in humans on the drug, including reduced mobility, impaired responses to sensory stimuli, which are collectively termed “dissociation.”

“We were hoping to pinpoint exactly what parts of the brain circuit ketamine affects when it’s administered so that we might open the door to better study of it and, down the road, more beneficial therapeutic use of it,” said co-lead and co-senior author Alex Proekt, MD, Ph.D., an associate professor of Anesthesiology and Critical Care at Penn.

Two-photon microscopy was used to image cortical brain tissue before and after ketamine treatment. By following individual neurons and their activity, they found that ketamine turned on silent cells and turned off previously active neurons.

The neuronal activity observed was traced to ketamine’s ability to block the activity of synaptic receptors—the junction between neurons—called NMDA receptors and ion channels called HCN channels. The researchers found that they could recreate ketamine’s effects without the medications by simply inhibiting these specific receptors and channels in the cortex. The scientists showed that ketamine weakens several sets of inhibitory cortical neurons that normally suppress other neurons. This allowed the normally quiet neurons, the ones usually being suppressed when ketamine wasn’t present, to become active.

The study showed that this dropout in inhibition was necessary for the activity switch in excitatory neurons—the neurons forming communication highways, and the main target of commonly prescribed antidepressant medications. More work will need to be undertaken to determine whether the ketamine-driven effects in excitatory and inhibitory neurons are the ones behind ketamine’s rapid antidepressant effects.

“While our study directly pertains to basic neuroscience, it does point at the greater potential of ketamine as a quick-acting antidepressant, among other applications,” said co-author Max Kelz, MD, Ph.D., a distinguished professor of Anesthesiology and vice chair of research in Anesthesiology and Critical Care. “Further research is needed to fully explore this, but the neuronal switch we found also underlies dissociated, hallucinatory states caused by some psychiatric illnesses.”

Related posts:
01/12/2022 Health News Comments Off on Study gives a peek at how ketamine acts as ‘switch’ in the brain
Categories
Recent Posts