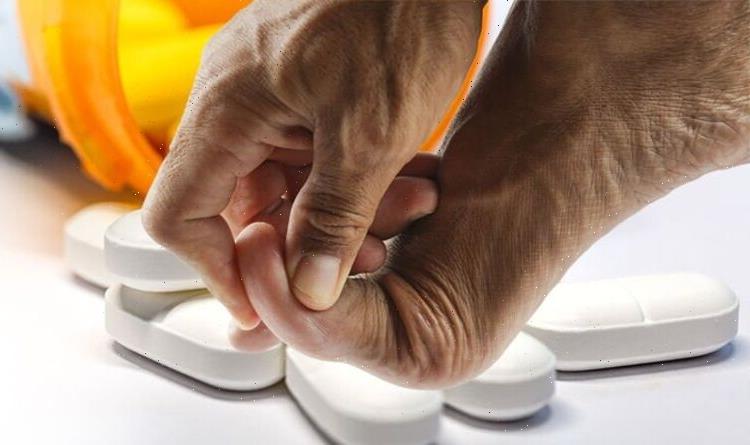 Statins: How the drug prevents heart attacks and strokes

Statins have been clinically linked to a wide range of side effects, but the most widely discussed are muscle aches and pains. Despite the drug’s effectiveness, thousands have stopped taking it due to these side effects. The drug, however, is also proposed to be among the causes of peripheral neuropathy. Although the side effect remains rare, it can cause life-altering complications unless treated swiftly.

Statins are a group of drugs aimed at lowering levels of low-density lipoprotein in the blood and preventing the formation of arterial plaque.

Ridding the body of plaque is essential for lowering the risk of heart attack and stroke, as blood can flow to the heart and brain.

And because the drug is deemed one of the most effective at lowering the risk of cardiac events, doctors widely encourage their use.

The drug has been recognised as the cause of certain health complications too, however.

READ MORE: Statins: Abdominal side effects – ‘your dose may need to be adjusted’

Early research states that statins users could be 14 times more likely to develop peripheral neuropathy, but the risk of the condition remains relatively rare.

But researchers continue to stress that the benefits of the drug for cardiovascular health far outweighed the risks.

Peripheral neuropathy occurs when the nerve in the periphery of the body becomes damaged, causing an onslaught of symptoms.

The Mayo Clinic says these can include: “A gradual onset of numbness, prickling or tingling in your hands, which can spread upward into your legs and arms.”

The health body also lists a sharp, jabbing, throbbing or burning pain, and extreme sensitivity to touch, as known symptoms of peripheral neuropathy.

The role of the nerves is to carry messages to and from the brain, so ensuring they’re preserved is imperative.

In the initial stages the condition is still reversible, so recognising the warning signs is of the utmost importance.

The five-year population-based study, conducted in Denmark, looked at a registry of patients diagnosed with peripheral neuropathy with no known cause.

A total of 166 cases of first-time neuropathy were identified, and nine of these patients had taken statins for an average of 2.8 years.

The results appeared to suggest that taking the drug at higher doses over longer periods of time increased the risk of developing neuropathy.

The overall risk of developing the condition remained relatively small, however.

Researchers probing the relationship between statins and peripheral neuropathy found that the drug inhibited an important enzyme in mitochondrial respiration, which could change the energy consumption of neurons.

This has been previously identified as a probable mechanism of peripheral neuropathy.

Peripheral neuropathy that is caused by a nutritional deficiency is easy to reverse through effective treatment.

When it is induced by drugs, however, it can be more difficult to treat, but is usually reversible when the drug is discontinued.