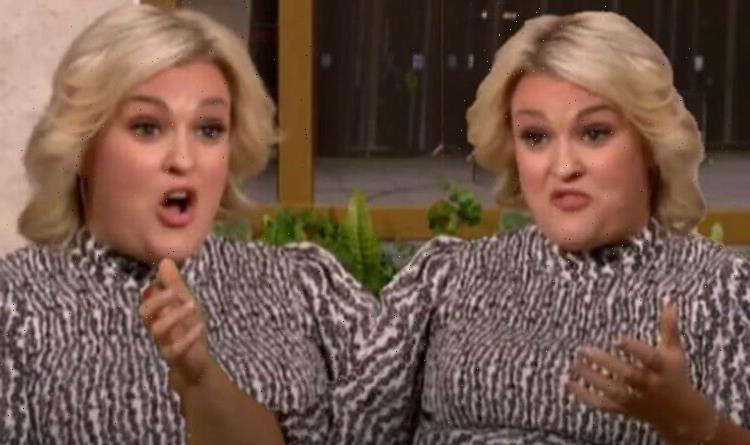 Before signing up to the BBC competition Sara, whose crafter’s supply company Crafter’s Companion exports to more than 40 countries worldwide and is said to be worth nearly £25 million, was warned by medical professionals that her BMI was too high, and she needed to lose roughly two stone in order to protect her health. BMI stands for body mass index and is a value derived from the mass and height of a person. The NHS explains that for most adults an ideal BMI is in the 18.5 to 24.9 range, it too high individuals are at risk of developing a huge range of health conditions such as type 2 diabetes, high blood pressure, heart disease and stroke.

Concerns for the 37-year-old initially started after she suffered from gestational diabetes with both of her pregnancies to sons Oliver and Charlie – a condition which can cause complications if not treated properly.

Speaking to blog Mum’s Days about her health complications when pregnant with Oliver Sara explained how she decided to carry on working even when she fell pregnant, but at 20 weeks she was handed a devastating blow.

“At 20 weeks I was showing as large and a scan dealt me the unexpected blow of confirming that I had Gestational Diabetes,” Sara explained.

“Not only was I shocked but my community midwife was in complete disbelief as I didn’t fit any of the criteria.

“Following the scan I was monitored over the next two weeks but despite trying to control the diabetes through my diet, the severity was such that I had to begin taking insulin to steady my levels.”

The NHS explains that gestational diabetes is high blood sugar (glucose) that develops during pregnancy and usually disappears after giving birth.

It can happen at any stage during pregnancy but it is most common in the second or third trimesters. Not only can the condition cause problems for the baby, it can also affect the mother.

Those most at risk of developing gestational diabetes include those whose BMI is above 30, if they have already given birth to a 10Ib or more child, or one or more of their parents had diabetes in a previous pregnancy.

Gestational diabetes does not usually cause any symptoms, and is only diagnosed when patients have a blood test. However, some women may develop symptoms if their blood sugar levels gets too high (hyperglycaemia), such as:

Sara continued to explain how the condition affected the rest of her pregnancy with Oliver. She added: “To begin with I had to inject myself once or twice a day but I ended up having to inject myself after every meal, so pretty much every four hours – not fun!

“The injections, coupled with the fact that I couldn’t enjoy chocolate or cream cakes anymore, put a real dampener on my pregnancy for a while.

“Owing to the severity of my diabetes I had to go to the hospital and have a Bio Physical Profile taken every two weeks, which showed that my baby was in the upper 97th percentile in terms of his weight.

“As a result, they wouldn’t allow me to go past 38 weeks without being induced.”

If left untreated, the problems that gestational diabetes can cause on pregnancies include:

Focusing on the positives of the diagnosis, Sara went on to say that due to her condition she was able to lose weight. The star added: “The silver lining was that I actually ended up losing weight!

“Before I fell pregnant I was perhaps verging on being overweight and if I hadn’t been diagnosed with Gestational Diabetes then I would have over-indulged, I know me!

“As I had no choice but to eat incredibly healthily I ended up being able to control my weight which has meant I’m not struggling having to lose baby weight now.”

In addition to changing your diet and exercise routine in order to lower blood sugar levels pregnant women will also be given a blood sugar testing kit so they can monitor their condition. If these changes do not have an effect, medication or insulin injections will be needed.

Overcoming her gestational diabetes, which came back during her second pregnancy, Sara’s health warning just before joining Strictly was another hurdle to overcome.

Speaking to Fabulous Magazine back in December 2021 she said: “I thought I would lose [weight] with Strictly. At first I was gutted, as I was getting on the scales every week and I wasn’t losing anything.

“I’ve never worked so hard in my life, so it should have been dropping off. But, I have definitely toned up. I’ve even had to buy new leggings. I don’t know if my BMI has changed, but I feel great. I hate going to the gym, but I’ve just been prancing around feeling a million dollars with my trousers falling down.”