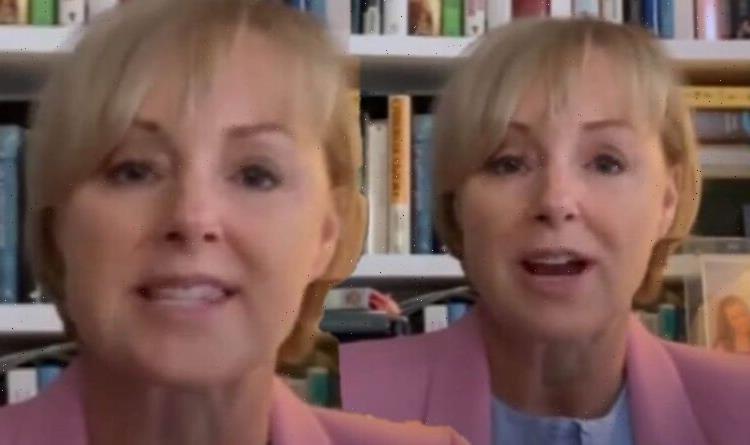 Remaining upbeat following her elimination from the popular ITV show, Dynevor said that she had the time of her life and hopes to remain friends with Evers off the ice. And the feeling seemed mutual with Evers posting a lengthy tribute to Dynevor a few days later on Instagram. Alongside a compilation of photos of the duo performing together, Evers wrote: “She [Dynevor] proceeded to explain her 35 year career on Coronation Street, her breast cancer story and how she is a survivor. She said she really wanted to take part this series to show that at 58 years, a mother of three, full time actress and cancer survivor could push herself into something that she was terrified to do.”

Dynevor’s cancer journey began back in 2010 when her real life mirrored her Coronation Street character’s.

Shortly after Sally Webster was diagnosed with breast cancer in the fictional soap, Dynevor also found out that she faced the same cruel condition.

Taking a break from the soap, Dynevor underwent both chemotherapy and a lumpectomy – surgery to remove cancer or other abnormal tissues from the breast – to overcome the disease.

Speaking to RTE about her cancer battle in 2010, Dynevor revealed the ups and downs of the past year.

The actress said: “Luckily I’ve come through the other end. It was a good prognosis from the beginning so you just have to stay strong for those six months.

“I’m just really glad that I’ve kind of got my life back on track again and I’m doing normal things.

“I feel amazing but the scary thing is I felt amazing before… but yeah, I feel really, really good.”

Explaining more about how she first found out that she had cancer, Dynevor revealed that it took her a whopping six months to get help in the first place.

She added: “I just want to say that because women out there might go, ‘Well, it’s not going to happen to me’ because that’s what I used to say.

“I thought, ‘It won’t happen to me, I’m really healthy and I run’ and I just thought, ‘It’s not going to happen’ and it did.

“I had that lump I think probably for six months when I look back but I was so in denial about it. I thought I was fine.

“I think that’s our defence mechanism in life, that you think, ‘It’s not going to happen to me, therefore I won’t address the issue’.

“I can’t stress this enough, I never thought this would happen to me.”

Breast cancer is the most common type of cancer in the UK. Although most women diagnosed with the condition are over the age of 50, younger women are also at risk of breast cancer too.

Invasive breast cancer occurs when the cancer cells have spread through the lining of the ducts into the surrounding tissue – the most common type of breast cancer, it is usually identifiable with a lump in the breast.

As well as a lump or area of thickened breast tissue, the first tell-tale signs that you may have breast cancer include the following:

Usually a mammogram or X-ray is done to identify early changes in the breast, with women who have a higher-than-average risk of developing the condition being offered screening and genetic testing to monitor their health.

Opening up about her diagnosis, Dynevor said that she “cried like [she’d] never cried before”. Speaking to Hello! the actress added: “It was uncontrollable sobbing.

“I didn’t want to die. I would hate to be sat on a fluffy cloud looking down on them [her children]. I couldn’t cope with that. I had to be there to see them grow up.”

Once diagnosed with breast cancer, treatment options will depend on the type and stage the disease is at. Breast cancer is usually treated through a combination of surgery, chemotherapy and radiotherapy.