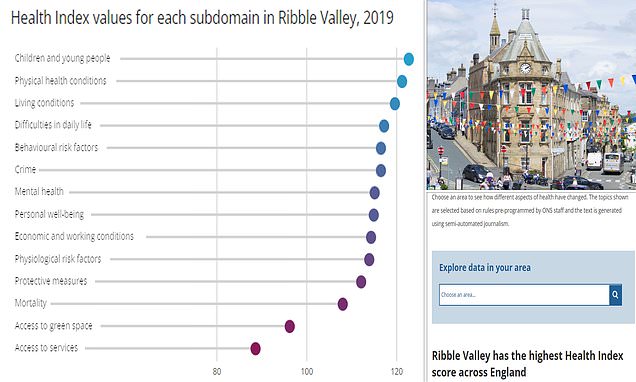 Ribble Valley is England’s healthiest borough: Lancashire district tops charts, while Blackpool ranks bottom… so use this interactive tool to work out how YOUR area fares

Analysts from the Office for National Statistics (ONS) ranked all of the country’s 307 council areas on their annual Health Index, measuring key areas of public health. Results were released on an interactive tool, allowing users to see exactly how your area stands up.

Ribble Valley — an area of Lancashire that covers Clitheroe and other ‘charming towns and villages’ — performed the best in England with a score of 112.9 for 2019.

Meanwhile, county neighbour Blackpool came bottom of the chart, getting 90.6. 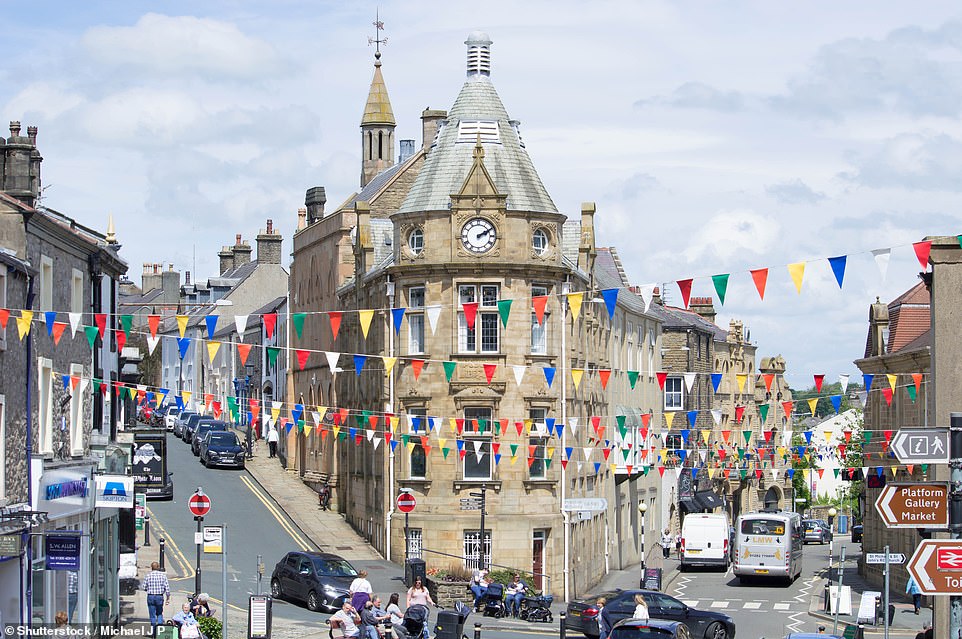 Ribble Valley, which includes the town of Clitheroe (here pictured in 2019) has been ranked by the Office of National Statistics as the healthiest borough in England in its Health Index report 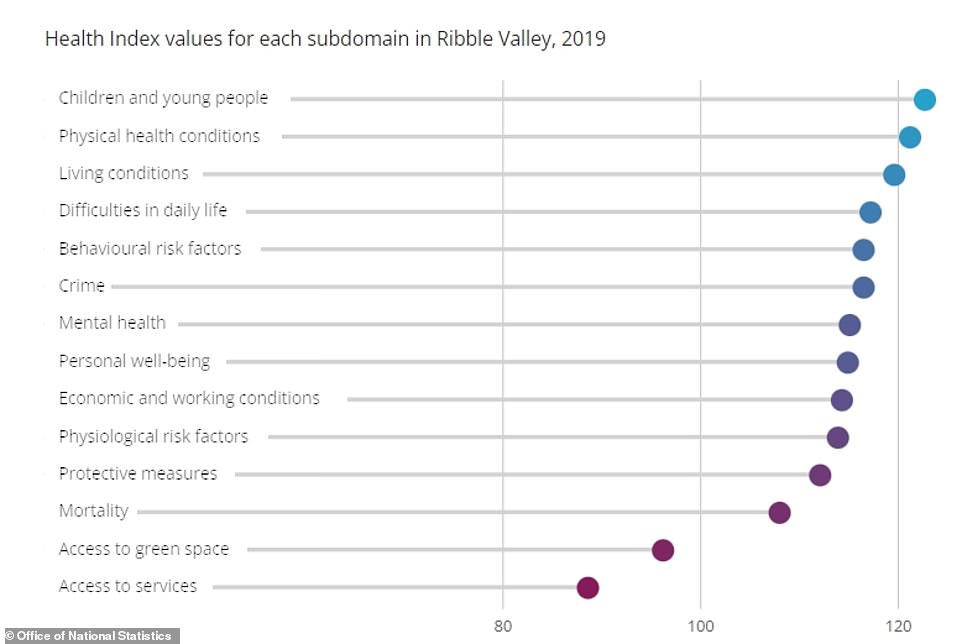 A breakdown of how Ribble Valley performed in a number of categories in the Health Index in 2019. A score above 100 indicates it performed better than the national average for England in 2015 in and a score less than 100 indicates it was below the national average. Ribble Valley was a high performed when it came to the health of children and young people, however scored lower in the ‘access to services’ like GPs, distance to pharmacies, distance to sports or leisure facilities, and internet access 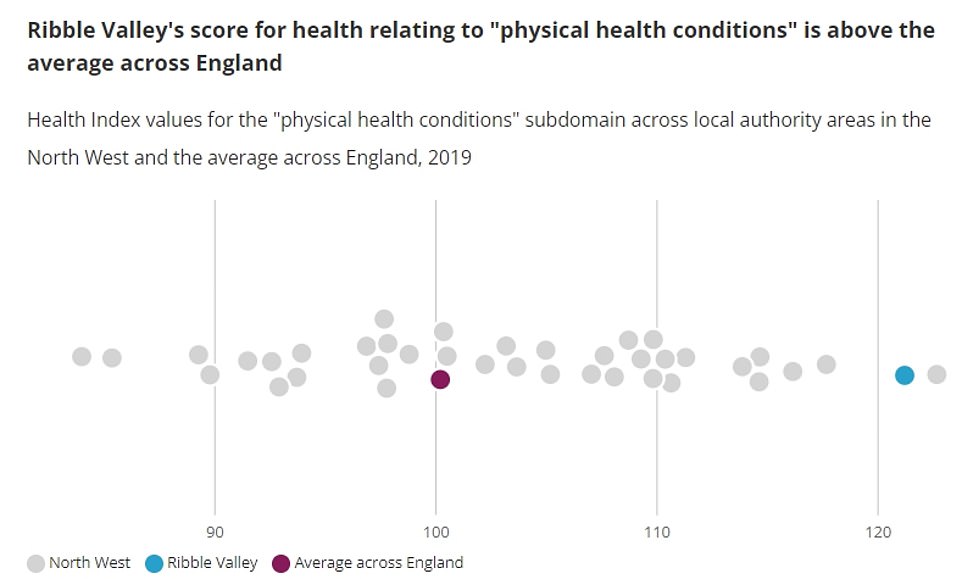 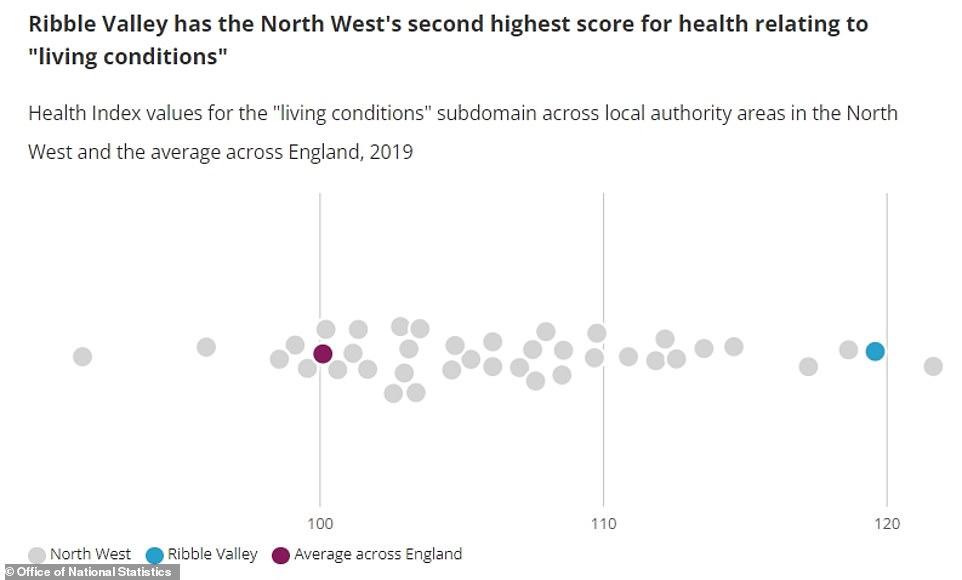 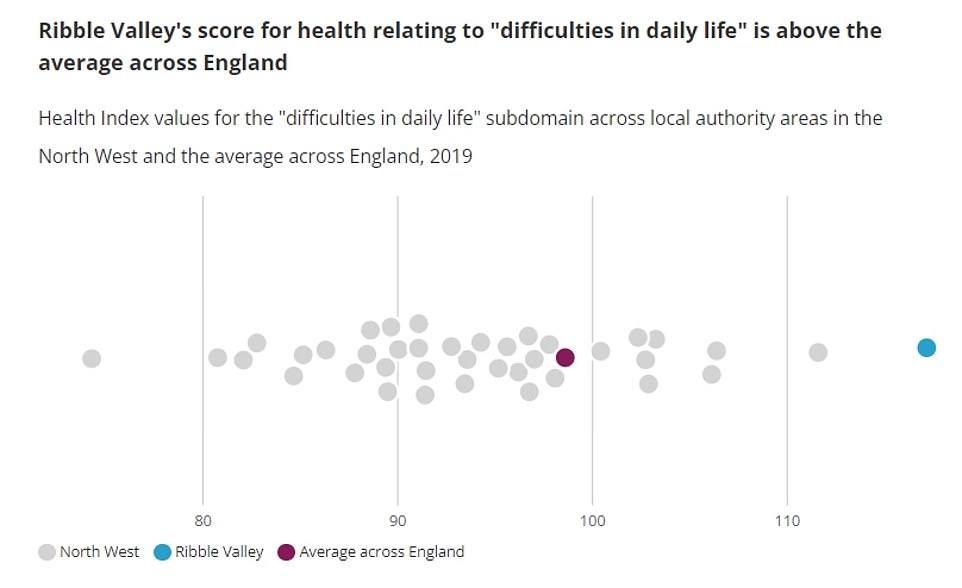 Called the Health Index, each area receives an assessment of three areas of health which are also further broken down into various sub-categories.

The three main areas are called:

Each area receives a score comparing its 2019 performance to the national average for 2015.

The 2015 score is treated as a baseline of 100, with a score higher than this indicating an area is healthier than the average, and below that it is unhealthier.

The ONS said Ribble Valley performed about 20 points better than the English average for physical health, driven by a decrease in cancer and diabetes among its population.

While Ribble Valley was a clear star in a number of categories such as the health of its children and young people and the physical health of its residents, it still performed below average in some areas.

In contrast to Ribble Valley, Blackpool performed the worst of all boroughs in England, ranking last with a score of 90.6. Although, this was actually a 0.1 rise compared to its 2018 score.

While some improvements were made for Blackpool’s physical health, particularly in dementia, it was still in the bottom 30 per cent of all England’s boroughs for this category.

Blackpool’s living conditions also saw improvement, particularly for air pollution which scored 28.9 points higher in 2019 compared to 2015. But it was let down by a rise in rough sleeping which caused a 12 point drop. 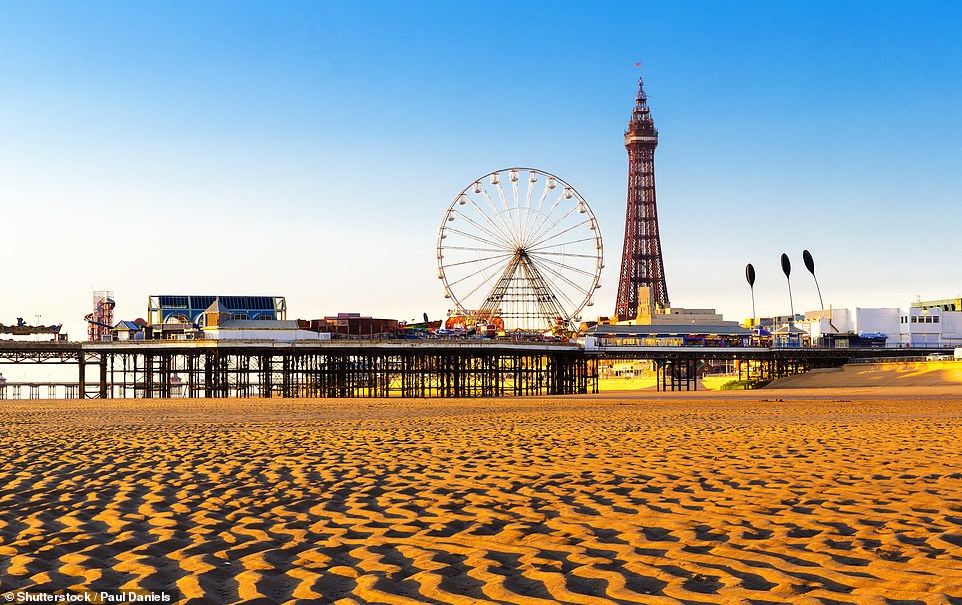 Blackpool was the worst ranking area in England in terms of health, scoring 90.6, the lowest score out of the 307 local authority areas (pictured Blackpool leisure beach) 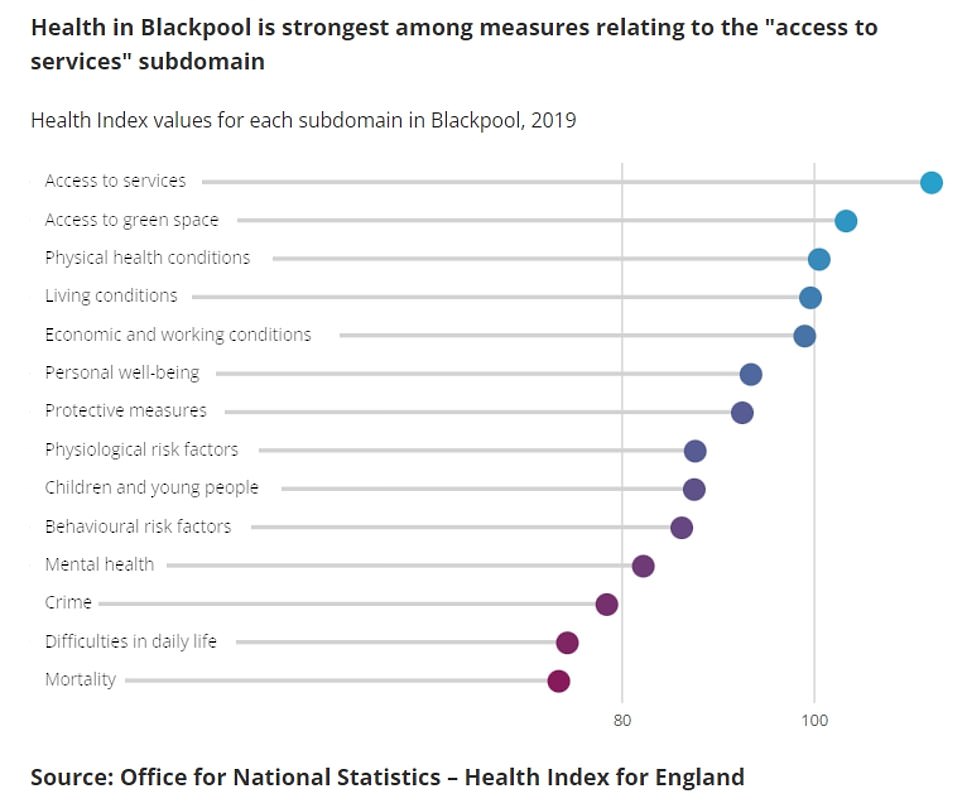 Blackpool ranked the worst in terms of its Health Index score for England in 2019, performing worse than the 2015 national average in a host of areas, with mortality, difficulties in daily life such as frailty and disabilities, and crime being well behind the rest of the nation. However, Blackpool did have better than average access to services like GPs, distance to pharmacies, distance to sports or leisure facilities, and internet access 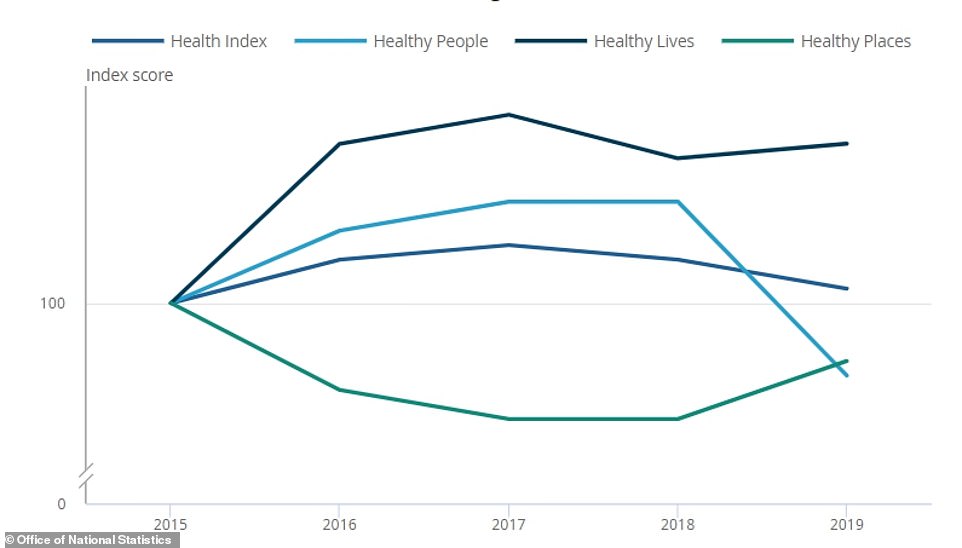 This chart shows how the Health Index for England, and its three main categories ‘Healthy People’, ‘Healthy Lives’ and ‘Healthy Places’ have performed from 2015 and 2019.  This shows the overall score has remained stable in that time but rises in ‘Healthy People’ seen in from 2016 to 2018 have disappeared and even dropped below 2015 levels in 2019. However, there has been a recovery in ‘Healthy Places’ since a 2018 low, but this is still below the 2015 score 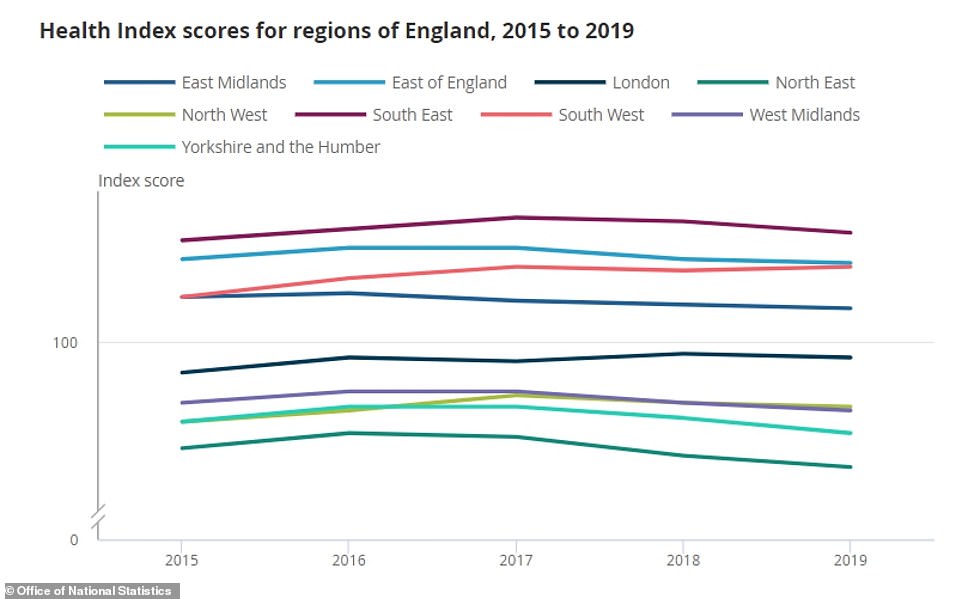 Regionally the South East was the top scorer in the Health Index report with 102.9 points, in comparison the North East was the worst performing region for health with a score of 96.7 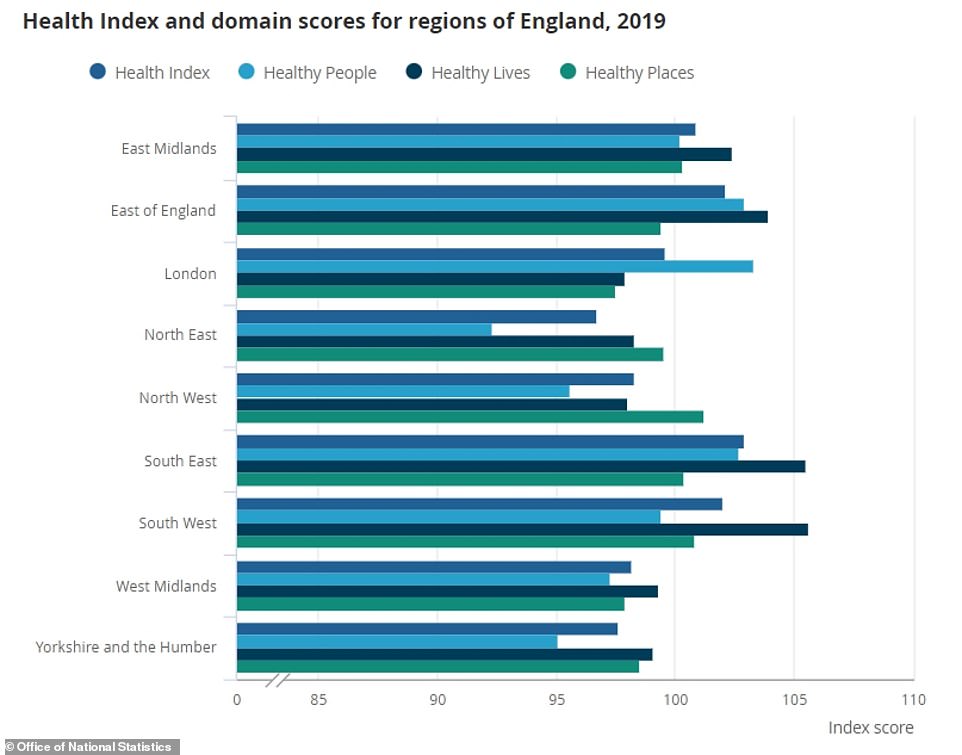 When comparing national scores the ONS found that England’s health remained broadly stable between 2015 and 2019, with a score 100.1.

It should be noted that the Health Index only includes data for 2019 so the impact of the Covid pandemic, both from the virus itself and disruption to both physical and mental health due to lockdowns, will not be reflected in the results.

The ONS found that while improvements had been made in the ‘Healthy Lives’ portion of the index, these were compensated by small declines in ‘Healthy People’ and ‘Healthy Places’.

The ONS plans to release the health index for 2020 which will cover the first year of the Covid pandemic later this year.