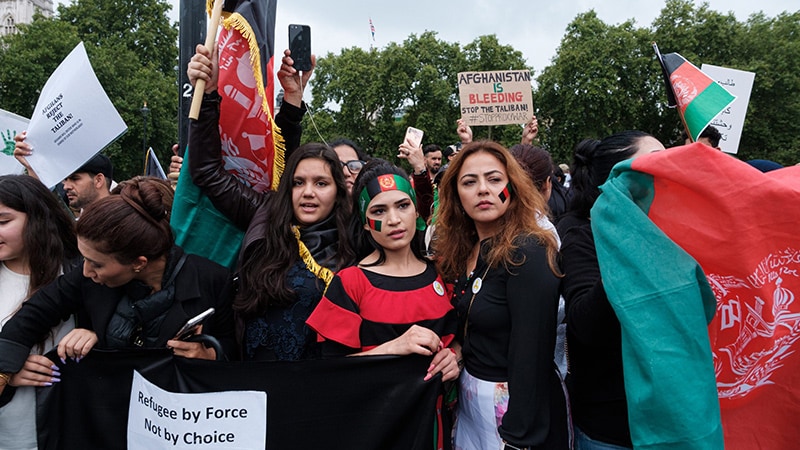 The June 1985 cover of National Geographic captured the piercing, green-eyed gaze of Sharbat Gula, known best as “the Afghan Girl.” At the time, Gula was a 12-year-old refugee during the Soviet occupation of Afghanistan. Alongside her siblings and grandmother, Gula journeyed by foot to Pakistan and to safety. Her image instantly became symbolic of the thousands of Afghani refugees seeking a better life.

For 30 years, Gula lived peacefully in Pakistan before being arrested for using a false Pakistani identification card, a common practice among refugees. She and her family were forced to move back to Afghanistan. Then, in August 2021, as the last American troops withdrew from Afghanistan, Gula was once again faced with the arduous journey of finding safety for herself and her family.

For neurologist/neuroscientist Dean Sherazi, MD, PhD, and his wife, fellow neurologist Ayesha Sherazi, MD, MAS, Gula’s story was more than a moment crystallized in history ― it was personal.

Shortly after the last US troops left Afghanistan, the Sherazis founded Restore Her Voice, a nonprofit organization that, according to its website, “works to provide the infrastructure that will position post-conflict women to achieve their potential, as well as the platform to elevate female voices around the world.”

As the Taliban overtook Afghanistan in the summer of 2021, the Sherazis were contacted by Steve McCurry, the photographer behind that epochal cover image, and his sister. “They wanted to get [Gula] out,” Dean Sherazi tells Medscape Medical News. “Together, we worked hard to get her out. Now she and her entire family are in Italy. And I’m hoping we can help her and empower her in any way she might need. She’s one of the most famous photographs in the world; she wants to use that to do good.”

Women in Afghanistan are often denied education and economic liberty. Gender-based violence and abuse are common and are exacerbated during times of crisis.

“When women are leaving that country, they’re going to be sucked into the daily drudge of trying to find a way out. But if you provide them with the equipment, the tools, the education, and the resources they need, they’re going to become powerful voices for themselves and thousands of other women,” says Dean Sherazi.

The Power of “Social Jujitsu”

For Ayesha and Dean, it was their Afghani ancestry and connection to the country that inspired them to found Restore Her Voice.

Just after the September 11 attacks, Dean traveled to Afghanistan for the first time after the conclusion of his fellowship and a stint at the National Institutes of Health. Ayesha had already spent time in the country through her work with Doctors Without Borders. The two met while working there in 2002 and were drawn to each other’s passion for medicine and healthcare. After a spirited discussion about Alzheimer’s disease at a party, the pair dated and later wed in Afghanistan in 2005.

The roots of Restore Her Voice can be traced back to the beginning of this relationship and the work the couple did prior to returning to the United States after their wedding. In 2002, Hamid Karzai, the former president of Afghanistan, asked Dean to be the deputy minister of health. He was tasked to help rebuild the impoverished nation’s healthcare infrastructure. Recognizing the limitations of the economic, political, and religious landscape, Dean formulated a plan to create a healthcare system emboldened by women’s empowerment.

“I call it social jujitsu,” he told Medscape Medical News. “You don’t have to confront people. You just have to flank and change their confrontation. We trained 20,000 nurses and midwives in the field. At the time, 1 out of 4 children were dying. One out of 6 women were dying of pregnancy-related complications. The men were dying from pneumonia. We thought if we created an army of women, sixth-grade educated, who know how to give care, that [will] significantly reduces the mortality rate.”

Not only did the campaign of this army of women significantly reduce infant, maternal, and overall mortality rates, but it also gave Afghan women a degree of freedom and protection not otherwise afforded by the Taliban-run government. 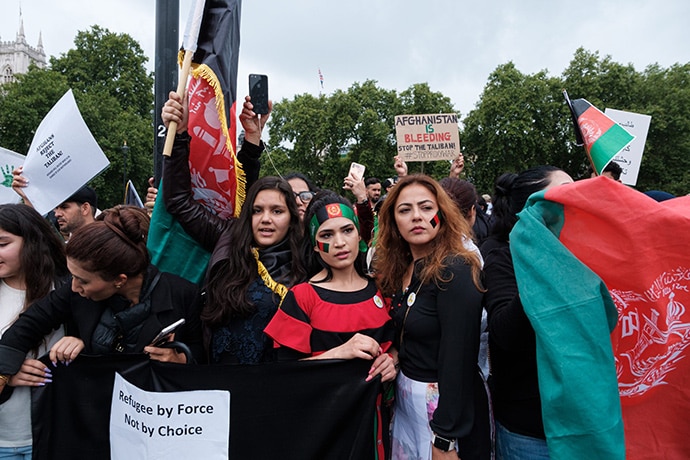 A group of Afghani women protests the Taliban regime.

“We knew that in a few months of being the only healthcare providers, [these women] would be seen as doctors and that even the Taliban men would go to them in a prostrate position promising protection for medical care,” Dean Sherazi says. “And you’ve just changed the dynamics without ever addressing cultural religion or anything political.”

The organization now faces the cat-and-mouse game of bureaucratic diplomacy. Acquiring papers or a visa for legal immigration to a country outside of Afghanistan requires a lengthy paperwork process, often delayed and routed through various government agencies. This process usually requires sponsorship and time ― a resource many Afghani women, on the verge of deportation, do not have.

“Everybody’s learning because every time it’s something different,” Dean Sherzai said. “Something like this has not been done to this scale, and each individual case is unique. So it’s a learning process, and we have to be patient.”

Just because Restore Her Voice or the Sherzais sponsor the cost of immigrating doesn’t mean that another nation is willing to accept the sponsored women. For example, two women from the Afghan national basketball team escaped to Turkey days before the fall of Kabul. The Women’s National Basketball Association had already offered to sponsor their visas to play in America, and Restore Her Voice has established a community network to help them thrive.

But the government of Turkey is poised to deport them in order to maintain diplomatic relations with the Taliban, and the US can only process so many visas from desperate Afghanis at once — the red tape is miles thick. In an attempt to minimize governmental back-and-forth, Restore Her Voice has organized a parlay between the Italian, Mexican, and American governments to more efficiently route the women’s asylum claims.

The Importance of Nongovernmental Organizations

The role of organizations like Restore Her Voice, Doctors Without Borders, and other nongovernmental organizations (NGOs) is critical to the health and safety of people affected by conflict, but it doesn’t come without challenges.

“NGOs play a crucial role in supplying aid and resources to immigrants and oppressed peoples in countries like Afghanistan,” says Raheem Banuazi, director of Islamic studies at the University of Nebraska. “They have a level of connection that governments and militaries can’t achieve. People find safety in people that look, act, and talk like them. Soldiers with rifles don’t do that. But some members of NGOs do.” 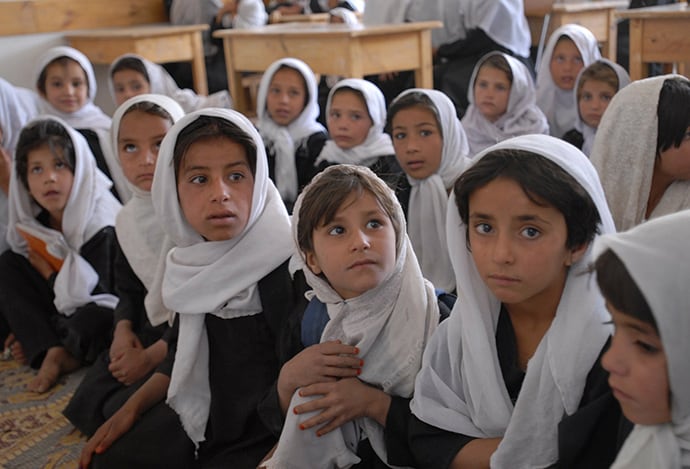 This level of connection does not come without risks.

“Precisely because they don’t have rifles, aid providers in dangerous places can be subjected to horrific treatment,” Banuazi says.

For example, in Afghanistan, the speed of the Taliban takeover shocked the world. A rapid conquest seized the nation’s primary airport in Kabul and limited other means to escape the mountainous, landlocked country. Afghanis who opposed the Taliban had nowhere to go and little means of receiving aid.

“In this scenario, the military is a broadsword,” Banuazi says. “The NGOs are the scalpels. They can manage details on a much finer level to create an impact that is more substantial to the benefited individuals.”

It’s because of this danger and the ability to influence more lasting change that Restore Her Voice has expanded its focus to within the borders of the United States ― but with a significantly bigger potential audience. Restore Her Voice wants to create a network to empower all women who are victims of traumatic or disruptive events ― immigrants, former prisoners, victims of domestic abuse, and others.

Following the Sherzais’ return to the United States, the pair took this community-centric approach to bettering health outcomes and applied it on their home turf. In looking at their community, they recognized that Black people in their town of Loma Linda, California, as well as throughout the US have worse health outcomes than non-Black people.

They mobilized their forces at Loma Linda University to create another community-based health initiative based around Black churches. For their work to create this community-oriented health program across California, the Sherzais received an award from the National Academy of Medicine for their outreach.

In seeking to create opportunities for Afghani women, the Sherzais want to use their organization to create organic opportunities for growth. A woman sponsored by Restore Her Voice, Jahar Shahryar, has ascended to the role of chief executive officer at the organization. Ultimately, that is the goal for the Sherzais and Restore Her Voice as a whole: to be a toolkit for women like Shahryar and Gula to use to empower themselves and others.

“These women ― they’re powerful, productive, and helping others themselves,” Dean Sherzai says. “That’s the whole point of this system. Wouldn’t it be wonderful to create a world where that’s possible for every woman?”