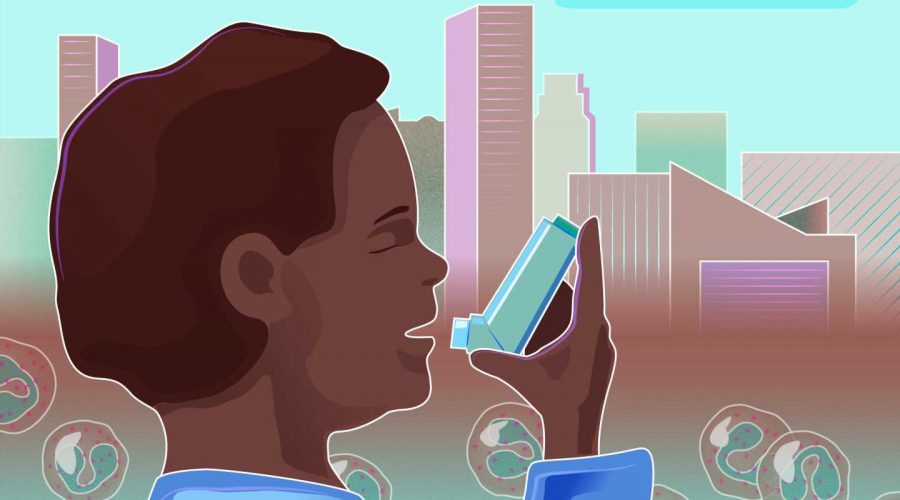 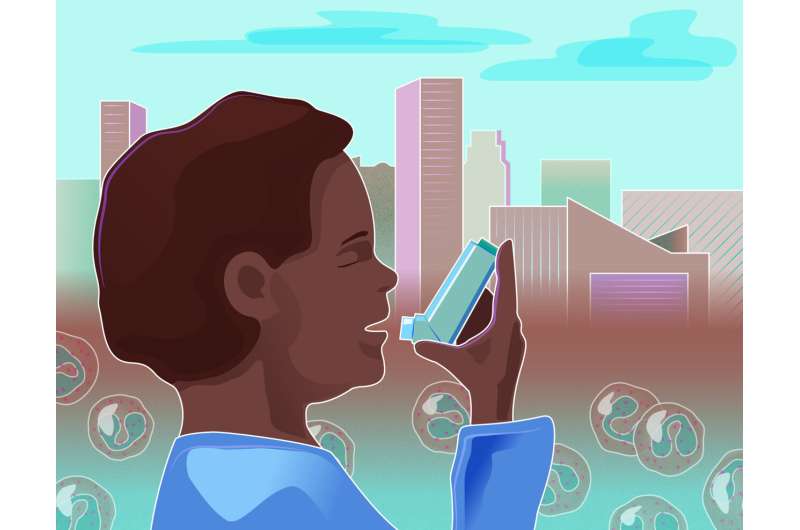 A National Institutes of Health clinical trial has found that a monoclonal antibody, mepolizumab, decreased asthma attacks by 27% in Black and Hispanic children and adolescents who have a form of severe asthma, are prone to asthma attacks and live in low-income urban neighborhoods. This population has been underrepresented in previous clinical trials of asthma therapeutics. The findings were published today in the journal The Lancet.

The study investigators undertook an innovative exploratory analysis of gene activity in cells collected from study participants’ nasal secretions at the beginning and end of the trial to try to help explain how mepolizumab works and link this to its clinical effect. The antibody tamped down the activity of three networks of genes associated with airway inflammation and asthma attacks in the study population but did not reduce the activity of six other such networks.

“Asthma exacts a heavy toll, especially on disadvantaged school-aged children of color who live in urban areas,” said Anthony S. Fauci, M.D., director of the National Institute of Allergy and Infectious Diseases (NIAID), part of the National Institutes of Health and sponsor of the trial. “The results of this study indicate that more research is needed to develop therapies that substantially reduce asthma attacks among these children.”

Asthma is caused by chronic inflammation of the airways. During an asthma attack, the airway lining swells, muscles around the airways contract, and the airways produce extra mucus, substantially narrowing the space for air to move in and out of the lungs. An estimated 2.3 million U.S. children and adolescents experienced an asthma attack in 2019, according to the Centers for Disease Control and Prevention.

Black and Hispanic children who live in low-income urban environments in the United States are at particularly high risk for asthma that is prone to attacks. These children often have many allergies and are exposed to both high levels of indoor allergens and traffic-related pollution, which can make their asthma even more difficult to control.

In an earlier study, MUPPITS-1, investigators identified multiple networks of functionally related genes that are activated together and are associated with asthma attacks in children and adolescents who live in low-income urban settings. Some of these genetic networks are specifically associated with cells called eosinophils.

Many people with untreated asthma have a high level of eosinophils in the blood and airways. These cells are thought to increase airway inflammation, which in turn leads to tissue damage, making breathing more difficult.

Mepolizumab, marketed by GlaxoSmithKline as Nucala, is approved by the Food and Drug Administration to treat people ages 6 years and older with eosinophilic asthma and has been shown to reduce blood levels of eosinophils. The investigators hypothesized that mepolizumab would suppress the eosinophil-specific gene networks associated with asthma attacks in Black and Hispanic urban youth with eosinophilic asthma, thereby reducing the number of asthma attacks in this population. The researchers further hypothesized that by analyzing asthma-associated gene networks during treatment, they would identify certain networks associated with stronger or weaker responses to mepolizumab. The MUPPITS-2 trial was designed to test these hypotheses.

The MUPPITS-2 study team enrolled 290 children ages 6 to 17 years whose asthma was difficult to control, prone to attacks, and characterized by high blood levels of eosinophils. Seventy percent of the participants were Black, 25% were Hispanic, and all lived in low-income neighborhoods in nine U.S. cities. The children were assigned at random to receive an injection of either mepolizumab or a placebo once every four weeks for 12 months. No one knew who received which type of injection until the end of the trial. All the participants also received asthma care based on guidelines developed under the auspices of the National Heart, Lung, and Blood Institute, part of NIH.

The study team collected nasal secretions from the children before they began receiving injections and at the end of one year. RNA, a form of genetic material, was extracted from cells in the nasal secretions and was sequenced and analyzed to determine the activity of various gene networks. The study team also collected blood samples from participants at the start and end of the trial and a few times in between.

Asthma control improved in all study participants, regardless of whether they received mepolizumab or placebo. This suggests that by participating in the trial, the children benefited from frequent clinic visits and maintained better adherence to hand-held devices called asthma inhalers, which deliver standard medication to the lungs to ease asthma symptoms.

As expected, the scientists found that mepolizumab safely and substantially reduced blood levels of eosinophils among children and adolescents after a year of treatment. However, this reduction translated into a relatively modest 27% decrease in the rate of asthma attacks compared to the placebo group.

To understand this result and explain why this effect is significantly lower than what has been reported in adults in other studies, the researchers examined activity levels of the networks of genes identified during MUPPITS-1 as associated with asthma attacks. They compared these activity levels between the mepolizumab and placebo groups and between the start and end of treatment. The investigators found that although mepolizumab significantly tamped down the activity of three eosinophil-related gene networks, it did not reduce the activity of five gene networks related to tissue inflammation nor of one related to both eosinophil activation and overproduction of mucus.