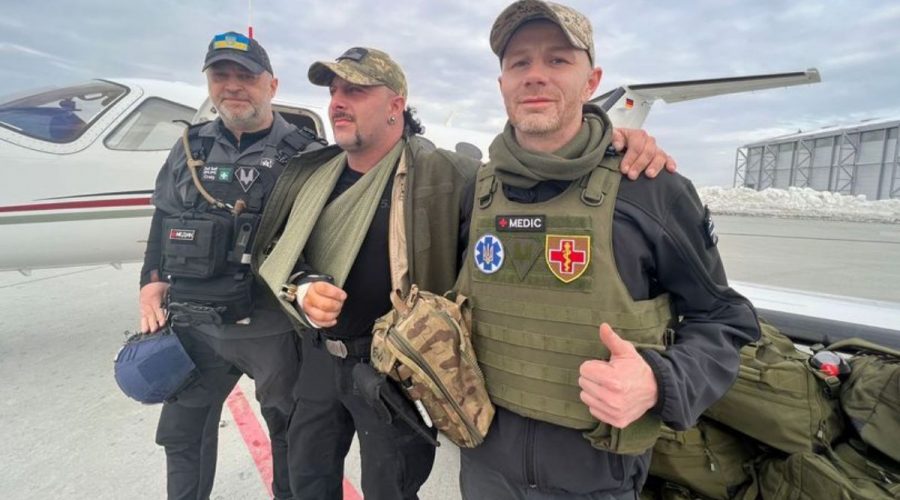 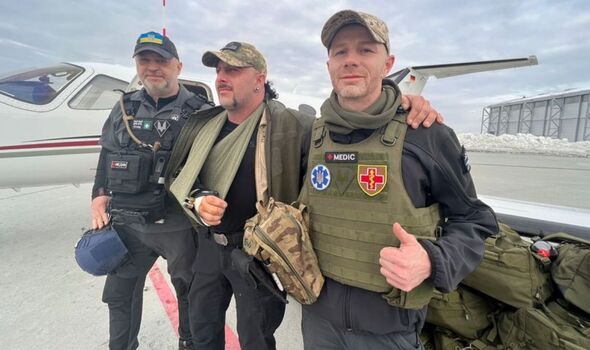 Craig Borthwick and Ewen Cameron, from Scotland, rescued Bristol-born Shareef Amin after he was severely wounded in a Russian bomb attack in Odesa.

The pair, who are both volunteers in Ukraine for the UK medical charity ReactAid, leapt into action after Shareef made an appeal to get home for treatment.

Despite heavy Russian bombing, Craig and Ewen managed to get the 40-year-old out of the under-fire city.

The next challenge was to transport the wounded man 600 miles across Ukraine and over the border into Poland so he could be airlifted to safety.

Thankfully, they managed to do this and get him safely on a plane back to the UK, where surgeons are attempting to rebuild his shattered body.

Craig, from Lanarkshire, told The Daily Record: “This wasn’t our first rodeo as we’ve been involved in Ukraine since the start of the invasion. But this time, everything that could go wrong did.

“The mission included an overland journey to Odesa, a city being regularly bombed, the risk of being arrested by the Russians, all the while managing a severely injured casualty.”

Shareef and his unit were attacked by Russian troops while patrolling the frontlines in October, leaving him with bullet wounds, punctures to both his lungs, and shrapnel embedded in all four limbs.

Craig and Ewen teamed up with the help of Ukraine Air Rescue to plan Shareef’s ­evacuation.

On December 17, the pair arrived at Krakow airport in Poland to collect an ­ambulance lent to them by a Norwegian crew.

Craig, 53, said: “It was going to take 14 hours to drive from Krakow to Odesa, through areas that have been heavily bombed and were a missile risk.

“We got in the ambulance and it wouldn’t go because it hadn’t moved for six weeks and we had to jump-start it.

“We drove 44 kilometres down the road and stopped at a filling station for fuel but when we set off, it wouldn’t start again.

“It was about 1am, the weather was terrible, it was snowing and minus eight degrees.

“We had no idea where we were and were completely stuck.

“We had a timescale to get to Shareef, get him back over the border and on to a private jet. This was a mercy flight but already we didn’t know if we were going to make it.

“Within just a couple of hours, most people would have chucked it but it isn’t in our psyche to do that.”

Luckily, a group of Ukrainian citizens in a convoy of 4×4 vehicles who were heading to the border stopped at the filling station and spent hours trying to get the ambulance going.

But the pair were eventually forced to abandon it in a bid to get to Shareef.

Craig said: “The guys gave us a lift and we made the decision to take the train from Lviv to Odesa.

“We had to carry 100kg of kit on foot between the two of us. Stations are a target for the Russians and we didn’t know until the next morning that as we were ­travelling through Vinnytsia, it was being bombed.”

Odesa had also been bombed the morning Craig and Ewen arrived.

After arriving at the hospital where Shareef was, the pair were hit by more problems.

Craig said: “The ­bureaucracy over there is horrific and despite the hospital saying he was fit to travel, Shareef didn’t have the documentation he needed to be able to go.

“It was a massive blow because we just had to get him out of there or he wouldn’t have received the treatment he needed.”

After 10 hours waiting they finally decided to set off with Shareef by train – despite horrific injuries to his arms, torso and legs.

On the train to Lviv in western Ukraine, Shareef was in horrific pain and Craig gave him injections every three to four hours to ease it.

“When we got to Lviv, the ­paperwork still wasn’t through,” Craig said. “We knew if we crossed the border without it, we could have been arrested or sent back to Ukraine but our hands were tied and we had to make a move that night.”

They were finally cleared to take a train to Poland, where a mercy flight to the UK from Rzeszow airport was waiting for them ­organised by Ukraine Air Rescue.

The flight stopped off at Cologne airport, where Craig ran a series of health checks on Shareef.

But when Shareef went through security at Cologne to get back on the plane for the last leg of the trip they were stopped by security because traces of explosives were detected on Shareef’s clothing.

Craigsaid: “The police were called but we eventually got through. It was just another thing that went wrong.

“We were so relieved when we finally got to Bristol, then a taxi to Southmead Hospital where we were met by a team of surgeons.”

Craig said handing Shareef over at the hospital was “very emotional”.

He added: “We’d had about seven hours’ sleep in four days and were physically exhausted and emotionally drained.

“How Shareef survived the ­explosion and the trip back, I don’t know.

“He’s a very special ­character and I’ve been speaking to him most days since we got home.

“Ewen and I are now waiting to evacuate other casualties but ­ReactAid desperately needs more funding.

“Every penny goes towards helping save lives.

“Ukraine is suffering so much but the people have incredible ­resilience. For now, I can’t see an end in sight to the war and I don’t know how it’s going to finish.”

He went to Ukraine, where his fiancee Helen Vitvickaja is from, almost as soon as the war broke out last February and initially provided humanitarian support.

But as the fighting ramped up he began using the skills he had learned in the British military to train the Ukrainians, before signing up as a soldier.

Shareef’s nickname is Rambo which comes from him being compared to Sylvester Stallone’s character in the movie, as a result of his grit and perseverance in the war.

Still recovering in hospital, he said he will go from “Rambo to Robocop” after his reconstruction surgery.

To make a donation to ­ReactAid visit here.