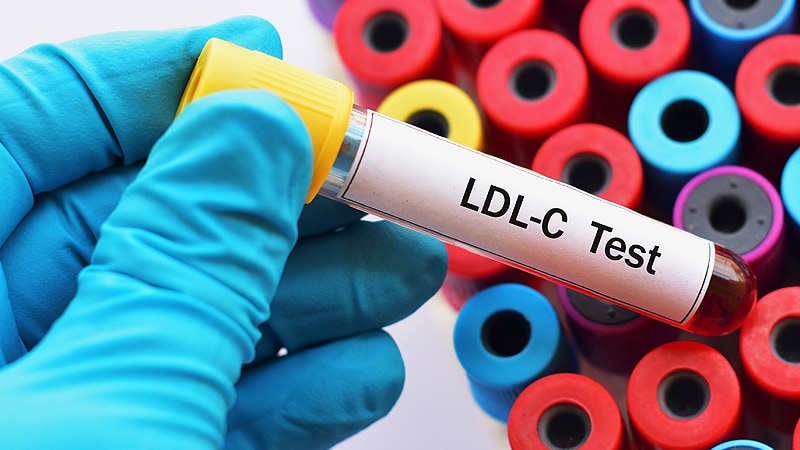 Patients who received an injection of inclisiran (Leqvio), a small interfering RNA (siRNA) agent, every 6 months for as long as 4 years safely maintained about a 45% reduction from baseline in their level of low-density lipoprotein cholesterol (LDL-C) in an open-label extension study with 382 patients.

In addition to providing the longest reported treatment experience with inclisiran, which received Food and Drug Administration marketing approval a little over a year ago, the results also confirmed with the most definitive evidence to date that inclisiran is significantly less effective for lowering LDL-C, compared with a class of medications that reduce LDL-C by a related but distinct mechanism: antibodies that directly inhibit activity of the proprotein convertase subtilisin/kexin type 9 (PCSK9) enzyme, a drug class that includes alirocumab (Praluent) and evolocumab (Repatha). Inclisiran cuts PCSK9 activity by blocking this enzyme’s gene transcription in liver cells thereby interfering with PCSK9 production.

Results from this study, the ORION-3 trial, provide “the first prospective long-term evaluation of the durability and safety of an siRNA-based therapy to provide clinically meaningful reductions in LDL cholesterol with a convenient dosing schedule,” wrote Kausik K. Ray, MD, and coauthors in a report in The Lancet Diabetes & Endocrinology.

The findings “provide assurance that siRNA-based therapies are safe and have the potential to provide a convenient approach to managing” LDL-C, wrote Dr. Ray, a cardiologist and professor of public health at Imperial College London, and his associates.

The new data from ORION-3 study included findings from 92 patients first treated with evolocumab injections every 2 weeks for a year, an intervention that lowered their LDL-C levels by an average of about 60%, compared with their pretreatment level. ORION-3’s study design then crossed these patients to treatment with injections of inclisiran twice a year during 3 further years of follow-up, during which their average LDL levels reset to a roughly 45% drop from baseline, a potentially clinically meaningful difference, commented Robert S. Rosenson, MD, a lipid management specialist who was not involved in the ORION-3 study.

“This is the first evidence that compared the two classes” within a single study, thereby avoiding a problematic cross-study comparison. “That’s why the data are important. They underscore that the monoclonal antibodies are more effective for lowering LDL-C,” compared with inclisiran, said Dr. Rosenson, professor and director of cardiometabolic disorders at the Icahn School of Medicine at Mount Sinai in New York.

The findings “confirm in a trial that the PCSK9 monoclonal antibodies are indeed more potent,” he said in an interview.

The roughly 15% absolute difference in LDL-C lowering between the two tested drug classes can have substantial clinical implications for patients who start treatment with highly elevated levels of LDL-C, more than 190 mg/dL, because they have heterozygous familial hypercholesterolemia, are unable to take a statin because of intolerance, or both. The difference in LDL-C reduction with an antibody or with inclisiran could mean the difference between whether or not a patient like this achieves their LDL-C goal level, Dr. Rosenson explained.

On the other hand, inclisiran has a couple of important advantages. First, its mechanism of action means that effective treatment involves one injection every 6 months following a patient’s first two injections at onset and after 90 days, with all injections administered in a clinician’s office. In contrast, both of the monoclonal antibodies require injections every other week, a schedule that depends on patient self-injections using prefilled syringes obtained from a pharmacy.

Twice-a-year dosing by a clinician can be a major attraction because it helps ensure treatment compliance, aids patients with physical or psychological limitations to self-injection, reduces the pill burden for patients who require multiple medications, and facilitates frequent travelers who would otherwise need to carry syringes with them on trips, Dr. Rosenson noted.

The second big advantage of office-based administration of inclisiran for U.S. Medicare patients is that the treatment is billed under a patient’s part B coverage, usually resulting in easier coverage and a significantly lower patient co-pay, compared with Medicare’s coverage for a pharmacy-dispensed agent, which is covered under Medicare part D. “Part B coverage is financially more doable” for most Medicare patients, said Dr. Rosenson.

The administration schedule for inclisiran as well as its superior Medicare coverage makes the agent “transformative” for LDL-C lowering in patients for whom treatment delivery, frequency, and payment are issues, he said.

Despite these pluses, uptake of inclisiran has been modest since it received U.S. marketing approval in December 2021. In its most recent quarterly financial filing, in October 2022, Novartis reported total worldwide income from inclisiran (Leqvio) of $70 million during the first 9 months of 2022, although a Novartis spokesperson noted that the company has seen “positive trends in uptake” over the course of 2022. Inclisiran is labeled as an “adjunct to diet and maximally tolerated statin therapy for the treatment of adults with heterozygous familial hypercholesterolemia or clinical atherosclerotic cardiovascular disease who require additional lowering” of LDL-C.

During 2022, inclisiran uptake lagged because of the usual problems that slow the introduction of new drugs and new drug classes, especially ones that require dosing by a clinician. Months were spent waiting for billing codes to roll out, for clinical staffs to incorporate inclisiran injections into their routines, and for commercial insurers to get up to speed on their coverage, Dr. Rosenson said.

Also, a key step for widespread uptake of a new medication for improving cardiovascular disease outcomes – results from phase 3 studies that document safety and efficacy for these outcomes – remains several years off. The ORION-4 trial and the VICTORION-2P trial, each assessing the impact of inclisiran on cardiovascular disease events in roughly 15,000 people, will need about another 3-4 years before their results become available.

Hence, the most recent update to U.S. LDL-C–management guidelines, released in the second half of 2022 by the American College of Cardiology as an Expert Consensus Decision Pathway, said this about the current role for inclisiran: “At the present time, a PCSK9 monoclonal antibody is preferred as the initial PCSK9 inhibitor of choice in view of its demonstrated safety, efficacy, and benefits for cardiovascular outcomes in the  FOURIER [for evolocumab]  and ODYSSEY Outcomes [for alirocumab] trials. The ORION-4 and VICTORION-2P cardiovascular outcomes trials with inclisiran are currently underway, and their completion is anticipated in 2026 and 2027, respectively. In view of the twice-yearly dosing regimen, inclisiran may be considered in patients with demonstrated poor adherence to PCSK9 monoclonal antibodies. Patients with adverse effects from both PSCK9 monoclonal antibodies or those who may be unable to self-inject may also be considered for therapy with inclisiran.”

The ORION-1 study was a phase 2 placebo-controlled, dose-ranging safety and efficacy assessment of inclisiran that gave patients two injections of the drug, at day zero and 90 days, and followed them for an additional 120 days (210 days total follow-up duration), and in some cases for as long as 360 days total. Of the 370 patients who received inclisiran in ORION-1, 290 agreed to continue inclisiran in the open-label extension, ORION-3. ORION-1 also included 127 patients randomized to initial placebo treatment, and 92 of these patients agreed to continue in ORION-3 and became the patients initially treated with evolocumab injections every other week for 1 year followed by initiation of an inclisiran regimen.

The primary outcome of ORION-3 was the change in LDL-C from baseline (the ORION-1 baseline) after 210 days of receiving inclisiran in ORION-3 (or a total of roughly 570 days after the start of ORION-1). The primary endpoint showed that, at day 210 of ORION-3 the average reduction in LDL-C from the original baseline level was 47.5%.

But a “more important” outcome, said Dr. Ray when he first reported the ORION-3 results during the American Heart Association scientific sessions in Chicago in November 2022, was that, overall, during 4 years on inclisiran this cohort showed an average cut in LDL-C from baseline of about 45% that consistently remained at this level throughout the 4 years of treatment.

“This provides us with an idea of what happens with chronic inclisiran dosing,” Dr. Ray explained. “There was no loss of biological efficacy, and we achieved these clinically meaningful, time-averaged reductions with a good safety profile. The great thing is that when patients get their injections [every 6 months] you see a consistent LDL-C reduction. A twice-annual injection is an opportunity to redesign” the way patients receive preventive cardiology care and treatment to lower LDL-C, Dr Ray said.

This article originally appeared on MDedge.com, part of the Medscape Professional Network.