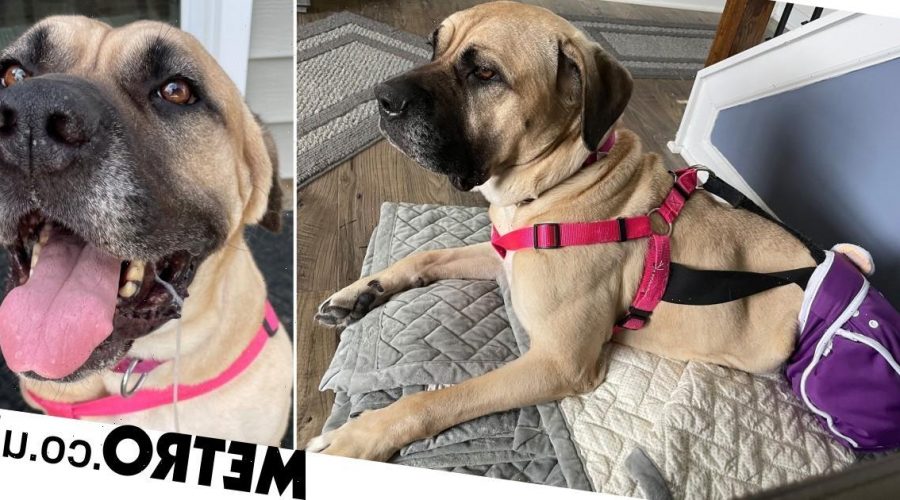 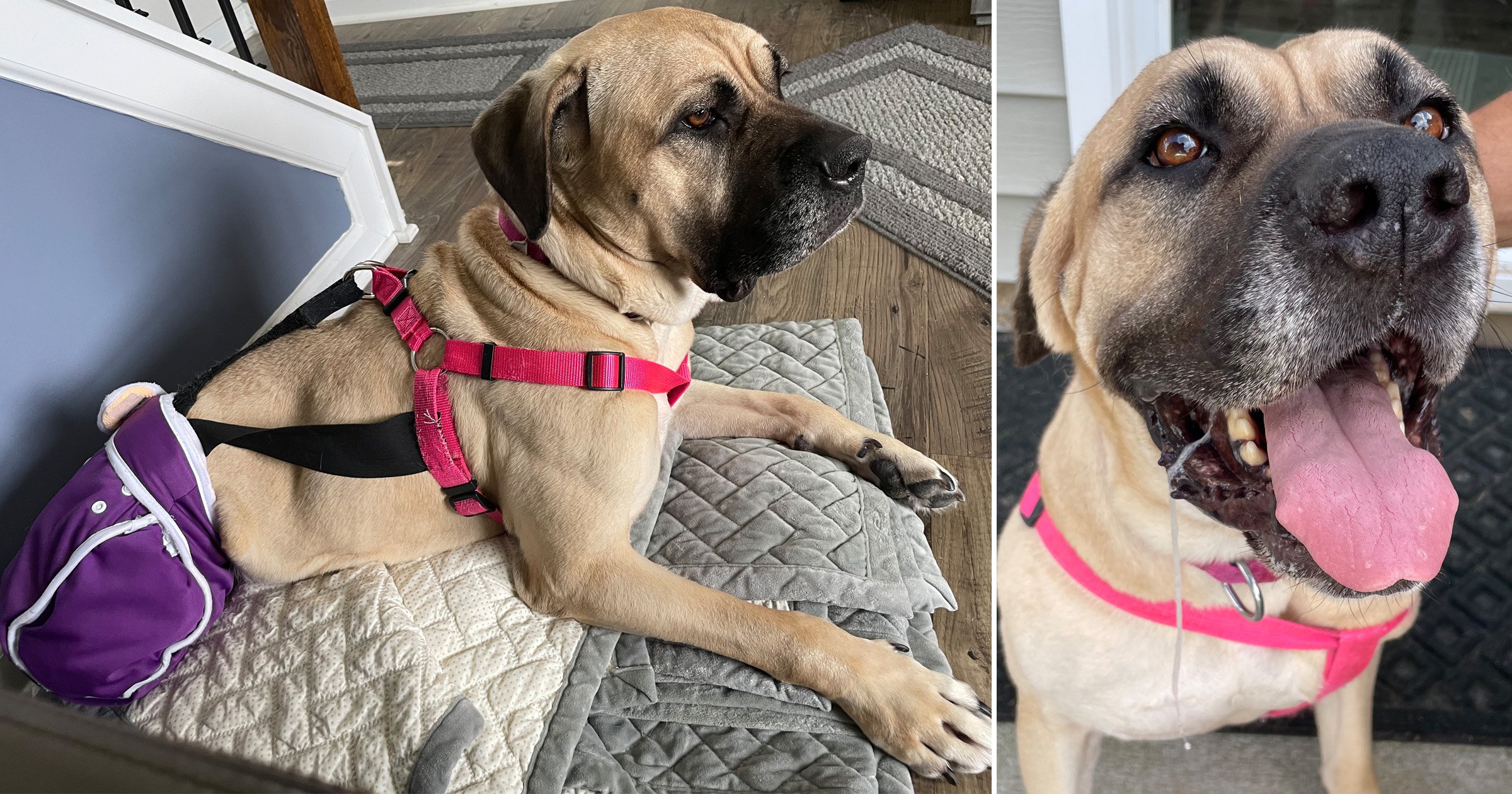 A paraplegic dog has become a TikTok and Instagram sensation after racking up hundreds of millions of views because she loves ditching her wheelchair to ‘run around like a T-Rex.

Dixie the Mastiff, who had, been paralysed in both her back legs since birth for unknown reasons, underwent surgery to remove both of her back legs in October 2019.

When Brittany Huyser, 34, first saw a picture of the five-year-old dog looking for a forever home in 2018, she immediately knew that she had to adopt her because they had an ‘instant connection’.

Due to her paralysis, Dixie needs to wear a diaper as she is incontinent but is otherwise healthy.

Brittany, who lives in North Carolina, USA, with her partner, construction worker Dennis Brown, 46, and works with autistic children, said: ‘Adopting Dixie was the most important and meaningful decision I have ever made.

‘She’s made me better and more empathetic.

To view this video please enable JavaScript, and consider upgrading to a webbrowser thatsupports HTML5video

‘And she shows me every day that animals that have disabilities can live long and happy lives.

‘She puts a smile on my face every day and all the people who follow her story online always say she has been inspired by her.

‘Some people have even asked me if it’s real, because she looks like she’s running around like a T-Rex.’

After moving to a new home with a back garden in August 2018, Brittany decided that she was finally able to have a pet of her own.

Her search for a forever furry friend came to a halt just two weeks later, when she saw a picture of Dixie online.

Brittany decided to drive to the foster home where Dixie was being looked after and says that their connection was immediate, although the dog was ‘very shy’.

Brittany said: ‘When I first saw her, she just gravitated towards me and wanted me to pet her.

‘The foster parents said she was very shy but she wasn’t at all.

‘She let me pick her up and play with her. She was warm, loving and playful.”

A week later, Brittany officially rehomed little Dixie, who at the time still had both her paralysed back legs.

Sadly, due to dragging her legs behind her, Dixie began to suffer with wounds and infections.

Eventually in March 2019, despite Brittany’s best efforts, a biopsy revealed Dixie had osteomyelitis, a dangerous bone infection that can be fatal.

In October that year, Brittany made the tough decision to have a vet amputate both of Dixie’s back legs in a bid to save her life – which she says was the ‘most terrifying but ultimately best decision’ she has ever made.

She said: ‘I was so nervous about the surgery as we didn’t know what the outcome would be but I needed to do anything I could to make sure she was ok.

‘It was the most terrifying but ultimately best decision I could make for her.’

Although Dixie has a wheelchair to help her move around, Brittany says that the happy dog loves running around on her two front legs more than anything in the world.

Brittany began posting pictures and videos of Dixie on Instagram in January 2019, but by late 2021 she only had 2,000 followers.

However, all it took was Brittany to post a video of Dixie running without her wheelchair, to suddenly up her count to more than 35,000 followers.

Brittany said: ‘I realised other people were curious about her and loved the fact she was different.

‘To me, she’s just my dog so I was really surprised.

‘When she got out of her surgery she just started walking that way. She’s got a big head that helps her balance.’

Brittany is inundated with questions each day, with the most popular being how does she pee, which led to her posting a video of Dixie happily urinating like a ‘splatter painting’.

She added: ‘The first time I saw her pee, I was in total shock. When I first took her out for a walk without a diaper, she peed all over my feet.

‘I didn’t think much of it at the time. I thought that was just what having a puppy is like.

‘If she is not wearing a diaper it just goes everywhere like a splatter painting. I think it’s hilarious.’

Brittany said she feels inspired each day because of Dixie’s infectious positivity despite all that she has faced in her life so far.

She added: ‘She’s so happy and just loves life, she doesn’t care that she has a disability. I think she just thinks she’s a normal dog and I love that.

‘She loves treats and going on walks, and playing and jumping, just like any dog.

‘She cheers me up every single day and makes me feel like I can do anything.’

Related posts:
16/09/2022 Health News Comments Off on Dog missing her back legs ditches wheelchair to 'run around like a T-rex'
Categories
Recent Posts