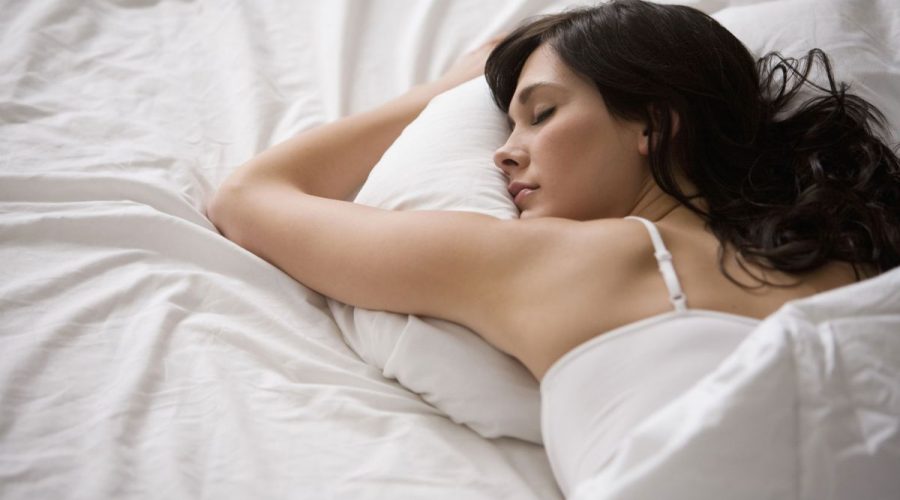 Are you curious to know more about what happens to your body when you switch off at night? Have you ever wondered: does sleeping burn calories? Research by PNAS has found the brain can use more than 20% of your body’s calorie intake per day and continues to burn calories even when you’re asleep.

Many people count calories during the day but skip on quality rest time in bed in order to slot in that early morning exercise fix. If you can relate to this, read on – you might be surprised to know just how beneficial sleeping is when it comes to burning calories.

Finding the right balance when it comes to sleep is crucial, because oversleeping has the reverse effect of rest and slows down your metabolism. Too little sleep has been linked to obesity and poor health. According to a report in the Mayo Clinic, research suggests an association between sleep restriction and negative changes in metabolism. In adults, sleeping four hours a night compared with 10 hours a night also appears to increase hunger and appetite.

What happens to our bodies when we’re sleeping?

Did you know that humans spend about one-third of their lives asleep? Yet many people don’t realize what really goes on when they’re asleep. Besides the fact that you are resting and recovering from the day, what goes on with your body while you’re sleeping is truly remarkable. This is your body’s strengthening and repairing process, and it’s a process that sends your immune system into overdrive.

“Even while we sleep, energy is expended to maintain the function of vital organs such as the heart, brain, lungs, kidneys, liver and the nervous system,” said Claire Murray, a PGDip Nutrition Science and Gut Health Specialist at Vitaminology. “Our body uses energy during sleep to repair organs, muscles and tissues, and clear the brain of toxins.”

What are the stages of sleep?

This is the first type of sleep and is broken down into three stages. The first is a light sleep, when you first fall asleep and everything starts to slow down, including eye movement and muscle activity. During the second stage, you have no eye movement, your heart rate slows, brain waves become slower and body temperature decreases. The third stage is when you enter a deep-sleep zone and your brain produces very slow brain waves called delta waves.

This is when dreams occur and eyes move around rapidly in various directions, but don’t send any visual information to your brain. Faster breathing occurs with an increase in blood pressure and heart rate. This happens about an hour to an hour and a half after falling asleep.

As Rachel Larkin, a British Association for Nutrition and Lifestyle Medicine (BANT) Registered Nutritionist explained: “The different stages of sleep require different amounts of energy. During rapid eye movement sleep, the energy requirement is highest. Heart rate increases and the brain is more active. Brain activity requires glucose, increasing metabolism. When the body is in deep sleep the body temperature, heart rate and brain activity are lower and therefore metabolism and energy requirements are lower.”

Does sleeping burn calories and if so, how many?

Our bodies are constantly burning calories even when we are sleeping and not moving an inch. Claire Murray told LiveScience: “The processes going on inside our bodies all need energy – breathing, circulation, digestion, brain function, temperature regulation, and cellular renewal and repair.”

According to a study by The Sleep Foundation, adults burn around 50 calories an hour during sleep at night. Taking this average alongside the seven hours of sleep per night recommended by the Centers for Disease Control (CDC) for adults, you could burn 350 calories without doing much at all. Although, this largely depends on each individual and their basal metabolic rate, food choices and exercise regime.

“Everybody burns a different number of calories while sleeping depending on their Basal Metabolic Rate – BMR,” explained Rachel Larkin. “The BMR determines the number of calories we need to exist without any external influences such as movement and exercise. Your BMR is influenced by your gender and an approximation can be calculated using your body weight, height and age, therefore there is a lot of individual variation. BMR will decrease as we get older and with weight loss.”

What affects how many calories we burn during sleep?

If you weren’t gifted with a fast metabolism and fall into the slow metabolism category recognized by the Mayo Clinic, shifting calories can be quite a slow process – especially if you haven’t got the right lifestyle factors in place such as a balanced diet combined with daily physical activity. Rachel Larkin explained the key factors affecting weight loss.

Children have a higher metabolism while they grow up, but once we reach adulthood our metabolism – and therefore calorie requirements – will decrease.

Muscle burns more calories than fat, so people who are fit and exercise regularly – particularly strength training – will burn more calories, even at rest. Exercise and any other activity involving movement will burn calories. Again, this will depend on the size and bodyweight of the person, as referenced in a paper from the University of New Mexico. The calorie requirement is greater to move a larger person, so they will burn more calories on a 30-minute walk, for example, than a smaller person walking at the same pace.

Exercise can also increase your metabolic rate for a period of time after you have finished exercising.  According to a 2011 study in Medicine and Science in Sports and Exercise, this is thought to be up to 14 hours, depending on the type and duration of the activity. After a vigorous aerobic exercise session or lifting heavy weights, your body needs to restore glycogen and other enzymes, such as adenosine triphosphate, within the muscles and also begins to repair damaged muscle tissue. Because your workout has depleted the energy-producing components from your muscles, your body must burn more energy from the food you eat. As you create more active muscle tissue from lifting weights, you also increase your resting metabolic rate.

Caffeine is a stimulant and can increase the number of calories you burn for two reasons. The first and most obvious is that, according to a 2004 study in the American Journal of Clinical Nutrition, the increase in energy you feel after consuming it can make you move more. The second is that the stimulatory effect on the body will increase metabolic processes. This is through a thermogenic effect – according to this study in the Journal of Medicinal Food, caffeine increases heat production which requires energy and a weaker lipolytic effect – as caffeine causes triglycerides to release fatty acids, which the body can then use for fuel. Caffeine will increase levels of cyclic adenosine monophosphate (cAMP) in the body which is associated with lower triglyceride levels in fat cells and improved protein synthesis in muscle cells.

Eating and utilizing the food we consume requires energy. Diet-induced thermogenesis, or thermic effect of food (TEF), is defined as the energy needed to digest, absorb and dispose of ingested nutrients. Around 10-15% of the calories we consume are used in metabolizing the consumed food. Each of the three macronutrients have different thermic effects. Protein, for example, burns by far the most energy of any of the three macronutrients:

Pregnancy, lactation, menopause, hypothyroidism or hyperthyroidism and other conditions can all affect calorie requirements.

Does eating late slow your metabolism?

Studies of late-evening eating have shown mixed results, with some linking it to poor food choices and increased calorie consumption. A 2013 study by Endocrinology and Metabolism Clinics of North America looking at markers such as insulin sensitivity, inflammation and blood lipids found that late-night eating had no effect on weight gain (as an indicator of metabolism) and that weight loss even improved in some cases. The same has also been found in a 2019 study for the journal Nutrients, looking at an earlier cut-off point for food consumption.

Larkin explained: “One common effect found is that late eating often takes place when the participant is tired, and therefore they are more likely to choose unhealthy options which would then have a negative impact on their health and the markers being measured.”

Kirsty is an accomplished writer specializing in the health, beauty and fitness industries. She has previously written for Fit&Well, LiveScience, City A.M., Global Blue, Grazia and the Sunday Telegraph in the UK.

You’ll find her running around Windsor Great Park most mornings with her youngest in the pram and her oldest scooting by her side. Kirsty loves trying/enduring the latest workouts and her latest obsession is an at-home Lagree microformer. She also enjoys rustling up nutritious family meals with fruit and vegetables harvested from her allotment.