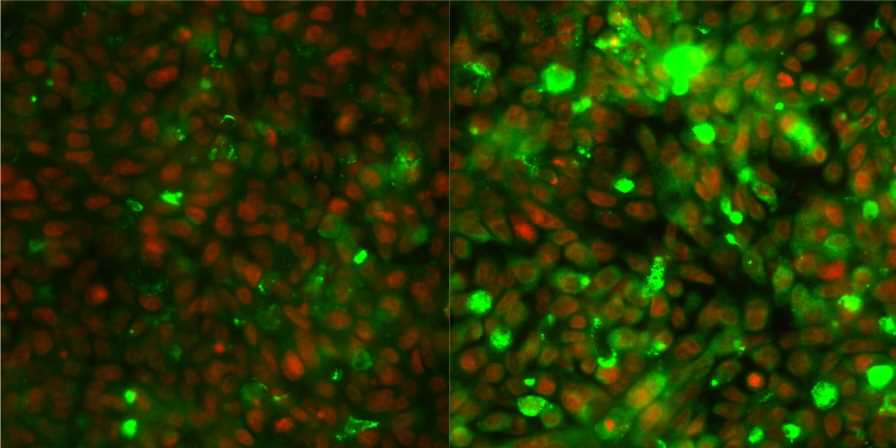 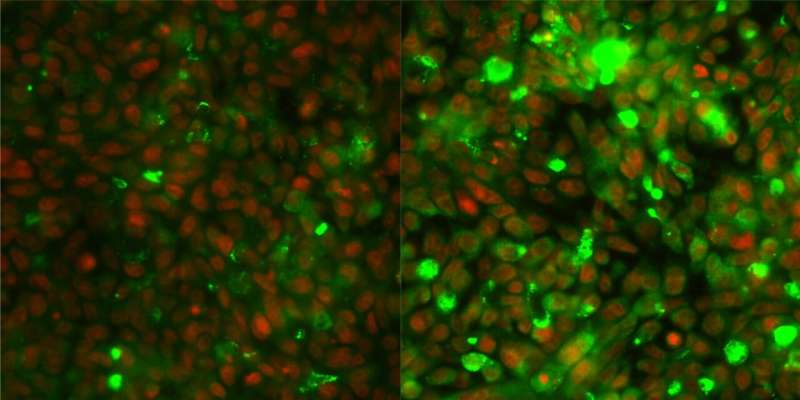 Drugs which are commonly used as the first line of treatment for colorectal cancer cause the tumor cells to oversecrete proteins known as mucins, according to a new study published today in the journal eLife. The proteins alter the mucous layer, forming a physical barrier that prevents drugs from reaching their intended target.

Using techniques involving genetic manipulation and the use of chemical inhibitors, the research team was able to experimentally regulate mucin secretion in cancer cell lines and patient-derived organoids, paving the way for the development of future treatments that can be used alongside chemotherapy to target drug-resistant forms of colorectal cancer. The experiments also revealed potential new biomarkers for the prognosis of the disease.

The researchers studied mucins, which are heavy, sugar-coated proteins that are secreted by specialized cells in the linings of the eye, nose, airway and the digestive tract, including the colon. On average, humans secrete up to a liter of mucins per day. Mucins have gel-forming properties that mix with other biological matter to form mucous, a thick liquid that acts as a lubricant, preventing tissues from becoming dehydrated and also forming a barrier to protect cells from pathogens and other external factors.

Colorectal cancer occurs when tumors develop in the colon or rectum. Adenocarcinomas are the most common type of colorectal cancer, often growing from the cells that constitute the mucous lining of the tissue. The researchers studied whether the overexpression of mucins could create a barrier for drugs reaching the tumor cells. Experiments with fluorouracil and irinotecan, two drugs given in combination as the first-line treatment for colorectal cancer, revealed that cancer cells respond to the treatment by secreting copious amounts of mucin.

“15 to 20 percent of colorectal cancers are linked to the overproduction of mucin. In some of these cases, this is a problem, because it will block drugs from reaching their intended target. What we were surprised to find is that chemotherapy itself triggers mucin secretion, potentially trapping patients in a vicious cycle requiring increasingly higher doses. This can be stopped if chemotherapy is combined with treatments that inhibit mucin secretion,” says ICREA Research Professor Vivek Malhotra, Coordinator of the Cell and Developmental Biology Programme at the CRG and author of the study.

The researchers studied different ways of blocking mucin secretion to make tumor cells more sensitive to the drugs. They first attempted to genetically manipulate levels of the protein KChIP3, previously shown by Dr. Malhotra’s research group to regulate mucin secretion. They found that colorectal cancer cells depleted of KChIP3 were four times more drug-resistant compared to cells with normal levels of KChIP3. In contrast, cells with higher than normal levels of KChIP3 were ten times more sensitive to chemotherapeutic drugs.

Dr. Lluís Espinosa, Coordinator of the Molecular Mechanisms of Cancer and Stemness at Hospital del Mar Medical Research Institute (IMIM), researcher at CIBER Cancer (CIBERONC) and co-author of the study, says, “The downside of using KChIP3 as a therapeutic target is that it requires the use of gene therapy, a technology that is still in its developmental stages and also very expensive to use.”

The authors of the study then assessed KChIP3’s potential as a biomarker for the prognosis of colorectal cancer. By studying publicly available datasets following the progression of patients with colorectal cancer patient, they found that high levels of KChIP3 indicated a longer period of time for disease-free survival, the length of time after primary treatment for a cancer ends that the patient survives without any signs or symptoms of that cancer.

According to Dr. Espinosa, further work must be carried out to develop KChIP3’s potential as a prognostic biomarker. “One of the main barriers for looking for KChIP3 in clinical settings is that we don’t have the antibodies needed to measure their levels. To include this biomarker in routine practice requires more research to develop ways of measuring it in the first place.”

The researchers studied other methods to block mucin secretion without resorting to genetic manipulation, such as using chemical inhibitors. Previous work by Vivek Malhotra’s research group had shown that inhibitors that block the function of sodium and calcium channels, known as NCX blockers, also inhibit the secretion of mucins.

The researchers chose an NCX blocker known as SN-6 for their experiments, which has previously been studied for its potential in treating heart arrhythmias. They tested SN-6 in organoids derived from patients, finding that it made colorectal cancer cells 40 times more sensitive to chemotherapeutic drugs.

According to Dr. Gerard Cantero, who performed this work at CRG and is now a principle investigator at Vall d’Hebron Research Institute (VHIR), the findings highlight a potential new treatment strategy. “SN-6 is a highly specific inhibitor, meaning it’s less likely to result in side effects compared to other NCX blockers. We found that SN-6 specifically inhibits the secretion of the mucins that are triggered by chemotherapy. Clinical trials are needed to confirm our findings, but combining SN-7 with chemotherapy is of great interest to overcome the side effects of chemotherapy.”