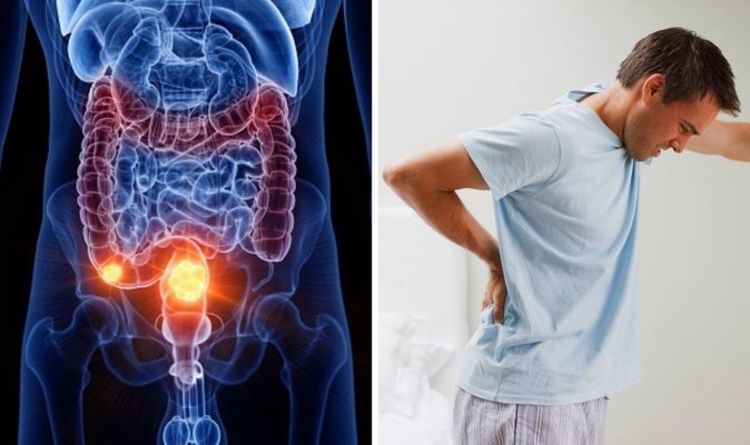 Bowel cancer is the fourth most common cancer in the UK and the second-worst killer, so it’s important to know the symptoms to catch it early. Symptoms aren’t just linked to your poo, however, as there are a few lesser-known symptoms of this cancer. Express.co.uk reveals the painful sign in your back that could indicate bowel cancer, according to Bowel Cancer UK and the NHS.

Even though bowel cancer is a big killer in the UK, it is treatable and curable – especially if caught early.

Nearly everyone survives bowel cancer if they get diagnosed at the earliest stage, which you have a better chance of doing if you are able to recognise the symptoms.

Bowel cancer symptoms aren’t just visible in your back passage and waste, there are a few other tell-tale signs, including some in your back.

The main symptoms of bowel cancer are:

Back pain isn’t normally a symptom of early bowel cancer, and it’s more likely to occur if you have a bowel obstruction.

A bowel obstruction happens when a tumour blocks the bowel, typically causing sudden strong pains and other noticeable symptoms.

In some cases, bowel cancer can stop digestive waste passing through the bowel. This is known as a bowel obstruction.

Symptoms of a bowel obstruction can include:

All gastrointestinal cancers such as bowel cancer and stomach cancer could potentially cause back pain.

It is thought that the pain from the obstruction or general bowel cancer site can radiate from the rectum to your back.

Bowel Cancer UK warned: “You may also be unable to empty your bowels or pass wind.

“If you think you have a blocked bowel, see your GP straight away or go to a hospital accident and emergency department.”

Related posts:
21/09/2021 Health News Comments Off on Bowel cancer symptoms: Rare but painful sign in your back could signal cancer
Categories
Recent Posts