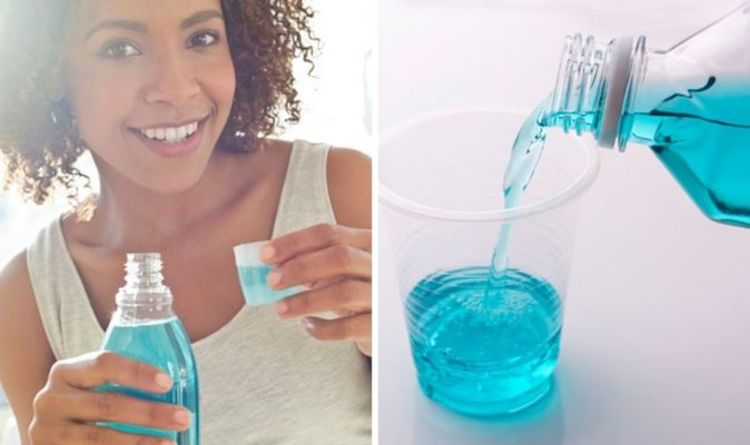 Only 72 percent of Brits brush their teeth at least twice a day, with up to 23 percent admitting they only brush once a day and four percent saying they brush less than once a day or never at all. Mouthwash cannot make up for a poor dental hygiene routine and should be used as an additional bonus alongside brushing and flossing.

What are the rules on using mouthwash? Is it really as simple as a quick swish around the mouth after brushing your teeth?

Almost 40 percent of us have never used mouthwash, but Dr Jahan recommends using mouthwash on a regular basis.

She said: “When it comes to looking after the mouth and oral health, mouthwash is just as important as tooth brushing as it helps prevent gum disease by removing bacteria that otherwise would not have been removed by brushing alone.

“It is recommended that mouthwash is used once daily and at a different time to brushing as rinsing can remove beneficial fluoride from the toothpaste which contributes to the strengthening of teeth and prevention of dental decay.”

Mouthwash ingredients vary from brand to brand and different bottles have different aims.

For example, some might aim to freshen your breath while others include fluoride and have an anti-cavity benefit.

If your mouthwash contains ingredients that kill germs, it will help to prevent plaque buildup.

If you have sensitive teeth and gums, you might prefer to use an alcohol-free or natural mouthwash using ingredients like aloe vera or chamomile.

Are YOU using mouthwash wrong?

Mouthwash can do more harm than good if you’re using it in the place of brushing your teeth and flossing.

It can also be very damaging to use mouthwash straight after washing your teeth, which most people do!

The NHS site warns: “Don’t use mouthwash (even a fluoride one) straight after brushing your teeth or it’ll wash away the concentrated fluoride in the toothpaste left on your teeth.

“Choose a different time to use mouthwash, such as after lunch.”

If you choose to use mouthwash at some point during the day, make sure you’re not hungry.

The NHS advises against eating or drinking for 30 minutes after using a fluoride mouthwash.

It has been suggested by some experts it’s better to use mouthwash before brushing your teeth in the morning, but this is up for debate.

Dr Jahan has listed the following four steps as crucial for mouth washing:

The cosmetic dentist added: “Remember to avoid rinsing with water after using a mouthwash as this can rinse away and exclude any benefits the mouthwash could provide to your oral health.”