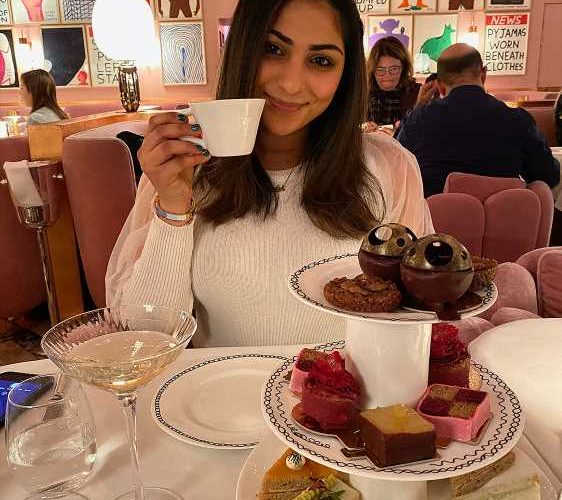 2020 was supposed to be a year of health and adventure for Risha Malhotra, who spent 2019 successfully overcoming a shock cancer diagnosis.

Instead, the 21-year-old college student has spent the year dealing with not one, but two bouts with coronavirus, eight months apart.

Cases of reinfection are not unheard of, but are certainly rare; The New York Times report in October found that at the time, fewer than five of the 38 million confirmed cases of the virus were confirmed by scientists to be reinfections.

Malhotra, a senior at the University of Wisconsin—Madison, tells PEOPLE she isn’t sure where she first got the virus, but knows it was somewhere in London, where she’d been studying abroad until she was abruptly sent home the second week of March.

She flew home to Long Island, New York on March 13, and immediately upon landing began experiencing chest pains, which only worsened throughout the night.

Malhotra had had a blood clot in her leg once before, so she checked into Syosset Hospital for a CT scan of her lungs, which revealed an infection that looked similar to those seen in COVID patients. “They tested me for COVID, and I started hearing the nurses and some of the doctors whispering in the back like, ‘Is she going to be our first case?’ Oh my god. What do we do?’” she recalls. “And I was like, ‘Wow, no one even knows how to deal with it yet.’”

It took 13 days for Malhotra to receive her results, but when she did, it was bad news: she’d tested positive. “This isn’t the first time I’ve gone through a scary or new medical run,” she says. “In July 2019, I was diagnosed with thyroid cancer, and that was very shocking. But as scary as it sounds, it was really easy to manage. I just had to get an immediate surgery to get my thyroid removed.”

She left for London cancer-free following radiation, and with the mindset that she’d finally have a bit of freedom and fun after a difficult year.

“And then,” she says, “when I come home and the first thing I do is end up in a hospital, it was like, ‘Oh my god, is it starting again?’… It was unsettling to hear that I had it, and no one else I knew had it yet.”

By the time she received her positive test, she’d had the virus for nearly two weeks, and her symptoms hadn’t progressed past chest pains. But on day 16, she says, she awoke to find her lymph nodes had doubled in size, and she’d developed a bacterial infection.

She was prescribed an antibiotic Z-Pak by her doctors, and her health turned a corner by day 18, when she finally felt symptom-free. Still, things like running remained difficult.

“I’m a pretty big athlete and I love running. But every time I tried running, even in April, I just would keep getting the chest pain,” she says. “I have an Apple watch and it monitors your heart rate on a run, and all of a sudden, I’d look down and my heart rate would be spiking at like, 200 beats per minute.”

She visited a cardiologist in May, and a new scan found remnants of the same COVID infection she’d had in her lungs in March, despite the fact that she’d since tested negative for the virus.

By summertime, Malhotra felt better, and tested for antibodies on Aug. 12 before going back to school in Madison later that month.

“The lab that I went to said, ‘If you have antibodies, the result will be 1.5 or higher.’ That was their calculation,” she says. “And I got my antibodies and I was at 2.5, which showed that I had a very high, almost double the amount of antibodies coming into this semester. I felt so comfortable coming to school like that.”

According to the Centers for Disease Control and Prevention, antibodies — which are proteins that help fight off infection — can provide protection against catching the virus, but it remains unclear just how much protection they offer, and how long they last.

“There are some people who just don’t develop good immune responses to certain pathogens,” Florian Krammer, an immunologist at the Icahn School of Medicine at Mount Sinai, told the Times. “What is causing that? We’re not sure, but it’s rare, usually.”

By September, cases in Madison were spiking, and Malhotra and her friends stayed at home as much as possible. She tested four times in September and October as a precautionary measure, and each time, the results came back negative, giving her a total of at least five negative tests since her first positive test. But then November hit, and cases began spiking once again in and around campus. On Nov. 8, she welcomed a friend to her apartment for dinner — only to learn the next day that the friend’s roommate tested positive.

Within two days, Malhotra had a brutal cold that she initially believed to be a sinus infection — but a COVID test on Nov. 13 confirmed the worst: she had, once again, tested positive for coronavirus.

“I sprinted to my bedroom, locked my door, and called my mom, like, ‘How is this happening again?’” she recalls. “Then my doctor called me and was like, ‘How did you test positive twice? This is crazy.’”

The second time around, her symptoms were milder, but she did develop slight chest pains, more intense fatigue and a severe, constant headache in addition to her sinus troubles. She also lost her sense of smell and taste.

“I feel like there are so many factors to this virus that people don’t know about, but me getting it twice and being symptomatic both times is just so shocking,” she says. “I think the scariest thing to take away from this is that we don’t know if this is going to have any long-term effects on any of our bodies.”

She adds: “I think that that’s what makes me want to be the most cautious and as socially distant and aware as I can be during this time because, until we have a vaccine, until we have an answer, everything is a guessing game.”

Malhotra also warns that everyone should take the virus seriously, not just for themselves, but for others as well.

“It’s great that some people recover or are asymptomatic,” she says. “But just because you’re fine doesn’t mean someone else is going to be. You don’t know who you’re impacting.” Related posts:
25/11/2020 Health News Comments Off on 21-Year-Old Cancer Survivor Gets COVID Twice: 'How Is This Happening Again?'
Categories
Recent Posts
We and our partners use cookies on this site to improve our service, perform analytics, personalize advertising, measure advertising performance, and remember website preferences.Ok